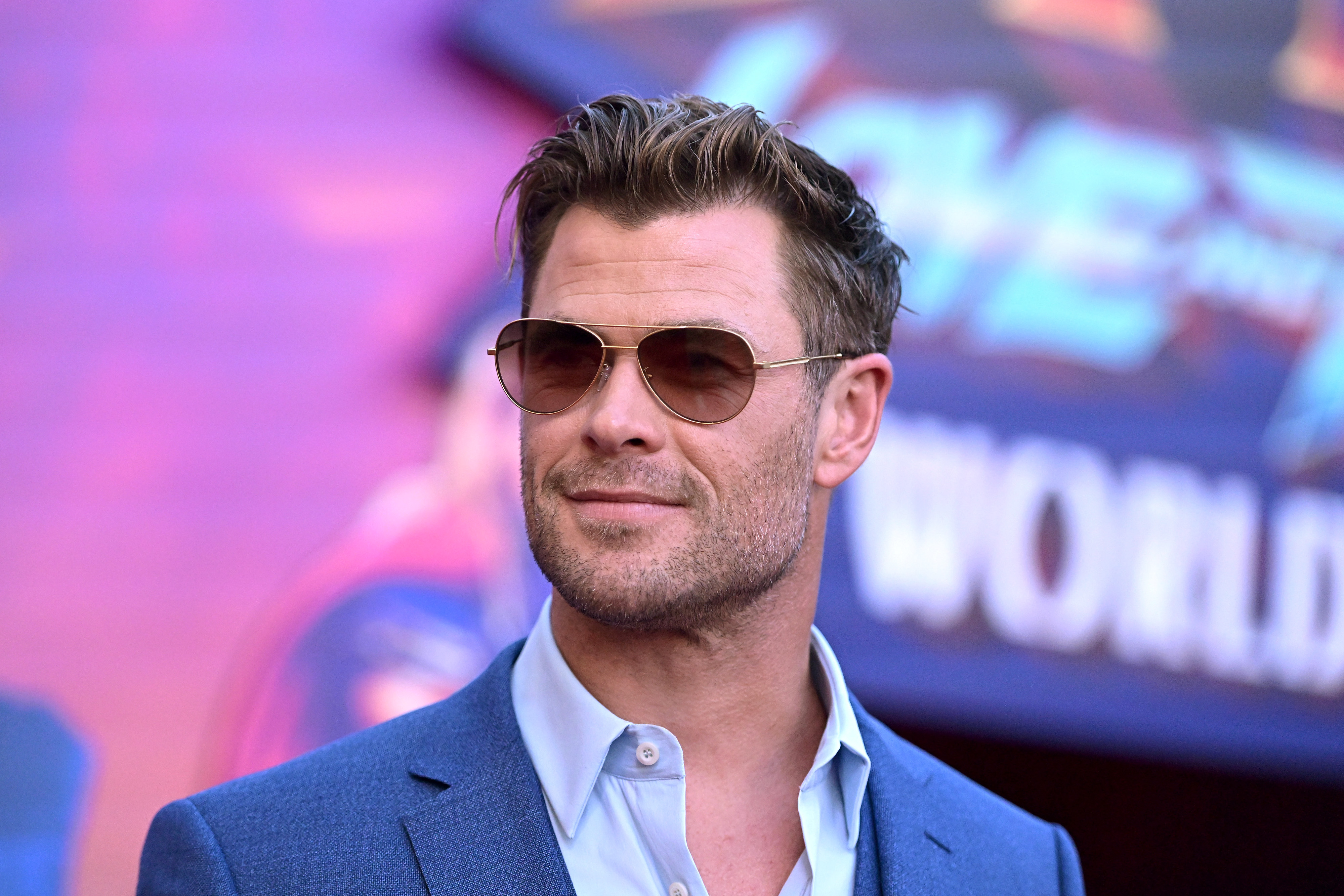 Thor: Love and Thunder is just weeks away, and the excitement is real.

The latest installment of Marvel’s Thor franchise will see the return of Chris Hemsworth as the God of Thunder, fighting his most terrifying battle yet.

With a star-studded cast including Chris, Natalie Portman and Christian Bale, the premiere was always going to be an A-list affair.

This week, leading actor Chris headed to the Marvel Studios in LA along with some of his family, where they joined other celebrities on the red carpet.

The award-winning actor posed before the poster of his new film with his brother Luke Hemsworth, Luke’s wife Samantha, and their parents, Leonie and Craig Hemsworth.

He stood proudly beside his wife, Spanish actress Elsa Pataky, with whom he shared three children.

The husband-and-wife team looked sleek and sharp on the red carpet, Chris’ hair far shorter than that of his on-screen persona and in a nice fitted blue suit, complete with a light blue shirt he allowed to hang open.

A slit on the side allowed her to show off her long legs as she beamed for the camera.

Also present at the premiere – and looking as stunning as ever – was Star Wars actress Natalie Portman, who returns to the Thor franchise for the first time since 2012 in the new film.

Natalie, who plays Jane Foster, reunites with Thor for the first time in almost a decade in Love and Thunder, and, as we saw in the trailer, expertly rushes into battle using the mighty hammer Mjolnir.

The Black Swan star strode confidently on the red carpet this week, posing confidently with hand on her hip for the cameras in a striking glittery dress, a strapless affair that scraped her thighs.

Natalie kept her hair back in a sleek knot, and wore heavy dark eye shadow to contrast the golden glitter of her dress.

Director Taika Waititi, who also stars in the upcoming film, mixed business with fun as he wore a sharp, navy pinstripe suit.

(Which he promptly matched with a long beaded necklace in the colour of the Thor poster.)

Taika was joined by Guardians of the Galaxy icon Chris Pratt, who is currently starring in the latest Jurassic World film.

Chris, who recently welcomed his second child with wife Katherine Schwarzenegger, looked smart in a fitted navy suit and striped shirt, pairing the outfit with a wristwatch.

Also gracing the red carpet was actress Kat Dennings, whohelped kick off the Thor franchise in 2010 through the role of Darcy Lewis.

Kat looked amazing in a short black dress featuring a bow at the chest that showed off her figure, her dark hair flowing loose past her shoulders.

She was joined by her fiance, musician Andrew WK, ho wore a navy suit and black shirt, his own long dark hair hanging loose.

Fellow Marvel actress Tessa Thompson posed on the carpet in a unique, shining black dress that, underneath the lights, almost appeared to have a lightning bolt running through it – perfect for the God of Thunder’s premiere.

Scottish actress Karen Gillan, best-known for her roles in the MCU and for starring in Doctor Who alongside 11th Doctor Matt Smith, opted for a gorgeous floral outfit thatsowcased her long legs.

Christian is set to play the terrifying villain Gorr the God Butcher in the newest instalment of the Thor franchise, with fans left terrified at the first glimpse of his character in recent trailers.

The actor looked far less intimidating at the premiere, where he beamed easily for the cameras alongside the mother of his two children.

Actor Sean Gunn, who first arrived to the MCU as Kraglin Obfonteri in Guardians of the Galaxy, took a different approach to the dress code, in a quirky outfit featuring a black t-shirt with a cat, an open pink shirt and brown, white and pink trousers.

Up-and-coming actor Kieron L Dyer beamed for photos in a snazzy black suede tuxedo, complete with a red handkerchief in the breast pocket.

Also at the lavish affair was Marvel comic artist Jim Starlin, the creator behind some of most iconic Marvel characters including villain Thanos and hero Shang-Chi.

Influencer and artist Vivian Xue Rahey stood out with her artistic black and blue hair and trademark colourful long nails, while Love and Thunder writer Jennifer Kaytin Robinson looked ecstatic as she posed in a cool and colourful bandage skirt.

TikTok star Reece Feldman appeared to have taken a leaf from Harry Styles’ book of fashion as he arrived to the red carpet in a black jumpsuit, the collar hanging open to reveal a delicate black necklace.

Film fanatic Juju Green made the most of the red carpet as he held up a replica of Mjolnir to the cameras, doing a perfect impression of the Greek God of Thunder.

The TikTok star dressed snazzily in a fitted grey suit and black shirt.

The cast and crew have gathered just over two weeks away from the film’s international release date, becoming the first to see the finished product in all its glory.

While Chris’ fan-favourite character was last seen in 2019’s Endgame, it has been five years since Thor’s last solo adventure – 2017’s Ragnarok.

The film is directed by award-winning Taika, who is returning to helm the superhero tentpole after having directed Ragnarok and winning an Oscar for his film Jojo Rabbit.

It will also feature the appearances of a number of the Guardians Of the Galaxy, including Chris Pratt, Dave Bautista, Karen Gillian, Pom Klementieff, Vin Diesel and Bradley Cooper.