McCain returned to “The View” from maternity leave this week, and returned to her fights with her co-hosts, too 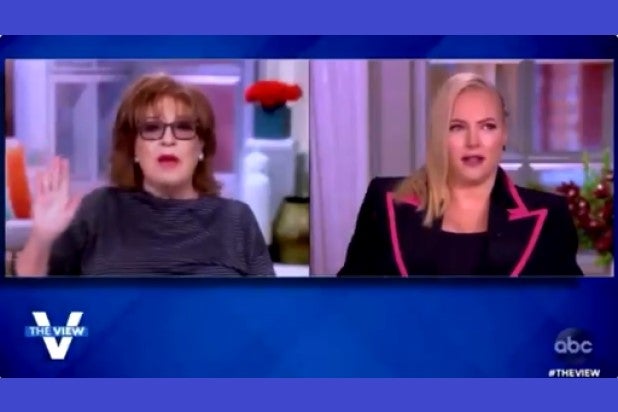 On Tuesday, Meghan McCain’s second day back on “The View” after maternity leave, co-host Joy Behar let her know she was not missed.

“Oh, my God. You know what? That’s so nasty. That’s, like, so nasty,” responded a laughing McCain as co-host Sunny Hostin tried to get a word in. “I was teasing but you said something rude. Really?”

The tiff — small, by the standards set by previous battles — came after McCain interrupted Behar during a discussion of division among Democratic party figureheads.

“I was speaking!” interjected Behar.

“I know,” said McCain, launching a moment of crosstalk that was interrupted by co-host Whoopi Goldberg’s plea for one panelist to speak at a time.

In late 2019, Goldberg addressed a fight she had with McCain, urging the audience not to assume the panelists were “sitting here with butcher knives under the table” but to realize it’s their job to go back and forth for an hour every day, which isn’t always pretty.

“We’re just going to do a little clean-up before we do anything,” Goldberg said at the time. “Things get heated on this show. If you watch the show, you know this has happened over the years. We’re really passionate … Sometimes, we’re not as polite as we could be.”

She compared the panelists on the ABC talk show to the viewers’ own families, saying the same kind of disagreements happen around family tables, too, and no viewer could possibly deny it, so they should “calm down.”

01/05/2021 Celebrities Comments Off on 'The View' Co-Host Joy Behar Chides Meghan McCain: 'I Did Not Miss You'
Recent Posts
We and our partners use cookies on this site to improve our service, perform analytics, personalize advertising, measure advertising performance, and remember website preferences.Ok