SALY, Senegal — Even though he was 6-foot-6 by the time he was 14 years old, when an aspiring basketball star in Senegal picked up a ball for the first time, his friends were skeptical: In this soccer-mad region, why bother with a ball you dunk, when everyone else is kicking?

“My friends thought I was weird in the beginning,” said the young player, Mouhamed Lamine Mbaye, now 18 (and 6-foot-9), as he stood on the court of a new basketball academy, the first to be built by the N.B.A. in West Africa.

“Basketball was just a passion,” Mbaye said. “But then I took it seriously when I realized I could make it.”

In this sports-obsessed West African country, it seems as though every vacant lot and dirt road doubles as an ad hoc soccer field. 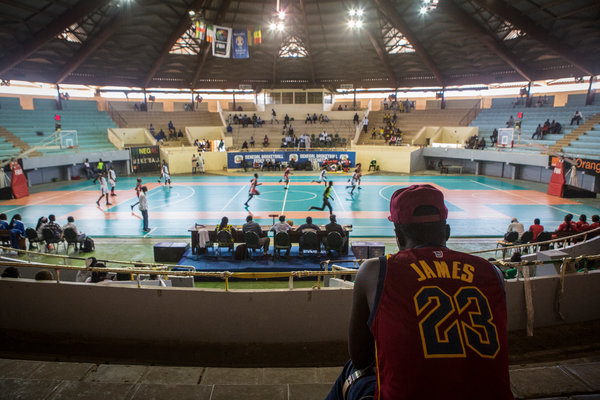 But as the deep-pocketed N.B.A. has taken an interest in the region — and infused a lot of cash — basketball is having its moment here after years of dribbling in soccer’s shadow.

The N.B.A. is planning a new league, the Africa League, and has set up youth training facilities — both shiny, permanent facilities and temporary camps to identify and hone new players across the continent. American and Europe-based recruiters have poured in, eager to scout the latest talent, while glittering stadiums have gone up, preparing for a rush of new, high-end play.

With all this activity, coaches and players, plus Senegal itself, are seeing their second-fiddle sport in a new way: as an opportunity.

It certainly was for Amadou Gallo Fall, a Senegalese player who was discovered at a local basketball camp by a Peace Corps volunteer in the 1990s and went on to play for the University of the District of Columbia. Fall, formerly the vice president of the N.B.A.’s Africa branch, was named president of the Africa League, which is scheduled to begin play next year.

“The ingredients have always been there in terms of talent and passion for the game,” Fall said in an interview. “There is a huge opportunity to create something really authentically African that could be a home for the tremendous talent that exists.”

The idea, in part, is to strengthen the pipeline of players to the N.B.A., but also to create a robust basketball landscape in Africa itself, and to elevate the sport here to soccer’s star status.

Along the dusty highway to the new airport near Dakar, the capital, Senegal’s basketball ambitions rise like an emerald city above the expanse of red sand. The green glass of the Dakar Arena, a 15,000-seat basketball stadium that opened this year, towers over a landscape of half-completed construction sites.

The new arena, which also can double as a volleyball and handball stadium, is to be the centerpiece of Diamniadio Industrial City. It is a suburb being built from whole cloth for $2 billion by the Senegalese government, in hopes of decongesting the traffic-choked capital city 20 miles away.

An hour’s drive south, in the beach town of Saly, there is another new court: the N.B.A. Africa Academy. Built two years ago, it is a training center for promising players, ages 14 to 18, scouted from across West Africa. The 21 current students receive a high school education and intensive instruction by former N.B.A. players and others, preparing them for futures in professional leagues.

On a recent evening, teenagers, including Mbaye, dribbled across a court so precisely waxed that visitors were instructed to walk around it, not across. It is a far cry from the way Mbaye grew up playing in Dakar, he said. Unable to afford sneakers, he played in what he had, Timberland boots.

Students arrive at the academy packed with raw skill — in Senegal, particularly in Dakar, working out is a way of life. But in a country where most people would rather play in a soccer scrimmage than in a pickup basketball game, the students often have little previous experience.

“You have guys, they have never seen a play drawn up, they don’t know how to run an assist, they don’t understand the language of basketball,” said Roland Houston, the technical director of the academy. It is run in partnership with the SEED Project, a nonprofit youth empowerment organization founded by Fall. “In a way, that’s good,” Houston said. “They’re not burned out on the game. They’re full of joy.”

Basketball has been played internationally in Africa since the 1960s, under the auspices of the International Basketball Federation, known as FIBA. But in international play, African countries have not cracked the upper echelon: Senegal’s men’s team is 37th out of 165 in the FIBA world rankings. Yet while there have been a handful of stars from West Africa in the N.B.A., such as Gorgui Dieng of the Minnesota Timberwolves, the number of players from this part of the world has remained low.

“I have asked myself, why wasn’t there a bigger surge of Africans in the N.B.A.?” Houston said of the academy. “But if you don’t see it, you don’t believe it, you don’t know that maybe, ‘I can play in that league.’ And I think that’s been a big gap, the guys just not knowing that, ‘Hey, you can do it too.’”

(The academy currently has only male students. The N.B.A. said that it was planning a girls’ class but that it had not determined a start date. The Senegal women’s national team is currently the best in the region.)

On a recent scouting trip in May, Maurice Johnson, a New-York based recruiter for ASL Sports Group, a sports recruiting agency, flew to Dakar to tour local clubs, on the hunt for future N.B.A. or N.C.A.A. stars. At a scrimmage held under the shadow of the gold-tipped minaret of a mosque, Johnson watched intently as players were brought before him. Their coaches rattled off details like wingspan and height in Wolof and French though a translator.

Any potential recruits Johnson identified would have a long, uncertain journey ahead of them, he said.

The crumbling national stadium in the heart of Dakar seems to illustrate how much more is needed to elevate the game and the players in Senegal. Inside the Marius Ndiaye arena, faded pictures of the handful of Senegalese players like Makhtar N’Diaye, who went on to the N.B.A., hang from the walls.

Seated beside the dimly lit court on a recent Sunday, Ndeye Awa Niang, a camp counselor, watched a game from the chipped, greenish bleachers. Niang, 30, once aspired to play professionally. But there are few opportunities to earn a living in the game; most players are unpaid. “You have some opportunities and talented players here,” she said. “But at the end of day, it’s a matter of means.”

Assane Badji was once the operations manager of one of Senegal’s main teams, the Dakar Rapids. Today he does the same job for the N.B.A. Academy. It is a new world of air-conditioned practices, crisp uniforms and tour buses for away games — the perks of professional sports that not long ago only a lucky few Senegalese experienced with careers abroad.

“This league will have a positive impact on the players because they will no longer just dream of going abroad,” Badji said courtside, over the noise of young players doing layup drills. “Instead they will stay, dream of playing in a big competition here, and value themselves.”

07/23/2019 Celebrities Comments Off on The N.B.A. Is Pushing Into Africa. Can It Compete With Soccer?
Recent Posts