Just days before skipping the 2021 Met Gala, Taylor Swift popped up in Ireland, where she stopped by local establishments and took photos with staff members.

Taylor Swift has been spending a lot of time away from the spotlight recently, but she popped up at a bar and restaurant in Belfast, Ireland on Sept. 9 and 10! The singer did not attend the 2021 Met Gala on Sept. 13, but just days prior, she was having loads of fun in Ireland. Staff members at the bar and restaurant she attended posted several photos with Taylor from her time in the city, and she looked like she was having a blast.

The singer was seen holding a drink in her hand in many of the photos. She wore her hair up, with her curly bangs across her forehead. Taylor rocked her classic bold red lip for both occasions, and willingly took selfies with all of the employees. Although her boyfriend, Joe Alwyn, was not present in the photos, Taylor was reportedly in town to spend time with him as he filmed his upcoming show, Conversations With Friends. We love a supportive girlfriend!

Taylor has not attended the Met Gala since 2016, when she actually served as co-chair of the event. Taylor famously had bleached blonde hair for the high-profile event that year, and it wound up being an evening that changed her life. The 2016 Met Gala was when Taylor first laid eyes on Joe (she recounted the experience in her 2017 song “Dress”). However, at the time, she was dating Calvin Harris.

Despite thinking Joe was “gorgeous” the first time she met him, Taylor spent a lot of time with a different guy that night — Tom Hiddleston. Less than a month after the event, Taylor and Calvin broke up, and she subsequently started dating Tom. They had a hot and heavy summer fling, but once it ended in September, she quietly got together with Joe. News of their relationship didn’t go public until May 2017. 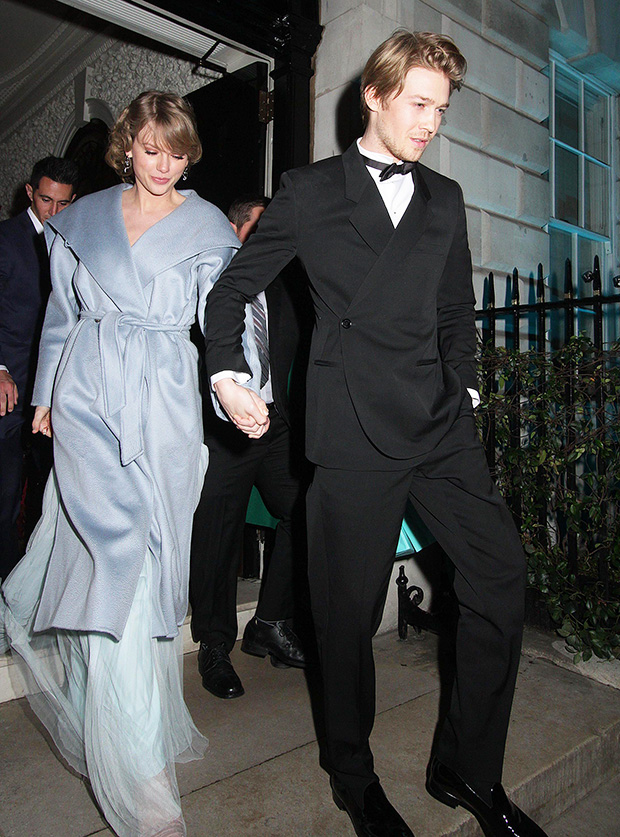 Taylor and Joe have since made a point to keep their relationship extremely private. They are rarely seen out in public together, and have yet to walk a red carpet as a couple. However, the lyrics in Taylor’s songs have definitely given us some insight into the pair’s very serious relationship.

That doesn’t mean that Tay is afraid to re-live her heartbreak of the past, though! She is currently in the process of re-recording her first six albums so that she can earn the rights to them. After releasing the re-record of Fearless in April, she’s bringing Red back next, along with a handful of songs that didn’t make the original cut of the 2012 album. Taylor has described Red as her “only true breakup album,” so she definitely had to tap into some feelings from the past to sing those songs once again! Red (Taylor’s Version) comes out on Nov. 19.