Shortly after hearing the tragic news, the ‘Loose Women’ star expresses her grief over the loss of the 8-month-old cancer-stricken baby girl, saying ‘it’s so cruel and so unfair.’

AceShowbiz –Stacey Solomon has shared a touching tribute to Ashley Cain‘s late baby girl Azaylia. After the former soccer player announced the devastating news that his 8-month-old daughter had lost her battle with leukemia, the “Loose Women” star quickly expressed her grief via her social media account.

On Sunday, April 25, “The X Factor” alum took to Instagram Story to voice her sadness. Shortly after Ashley announced the heartbreaking news, she reshared his Instagram post that said, “She’s proof that you can walk through hell and can still be an angel.”

In her Story, Stacey wrote, “Heartbreaking.” She added a crying emoji in addition to her words of condolences, “I’m so sorry to every single child and parent who is suffering, has suffered and will never stop suffering.” She additionally noted, “It is so cruel and so unfair,” before closing the emotional note with, “Rest in Paridise Azaylia.” 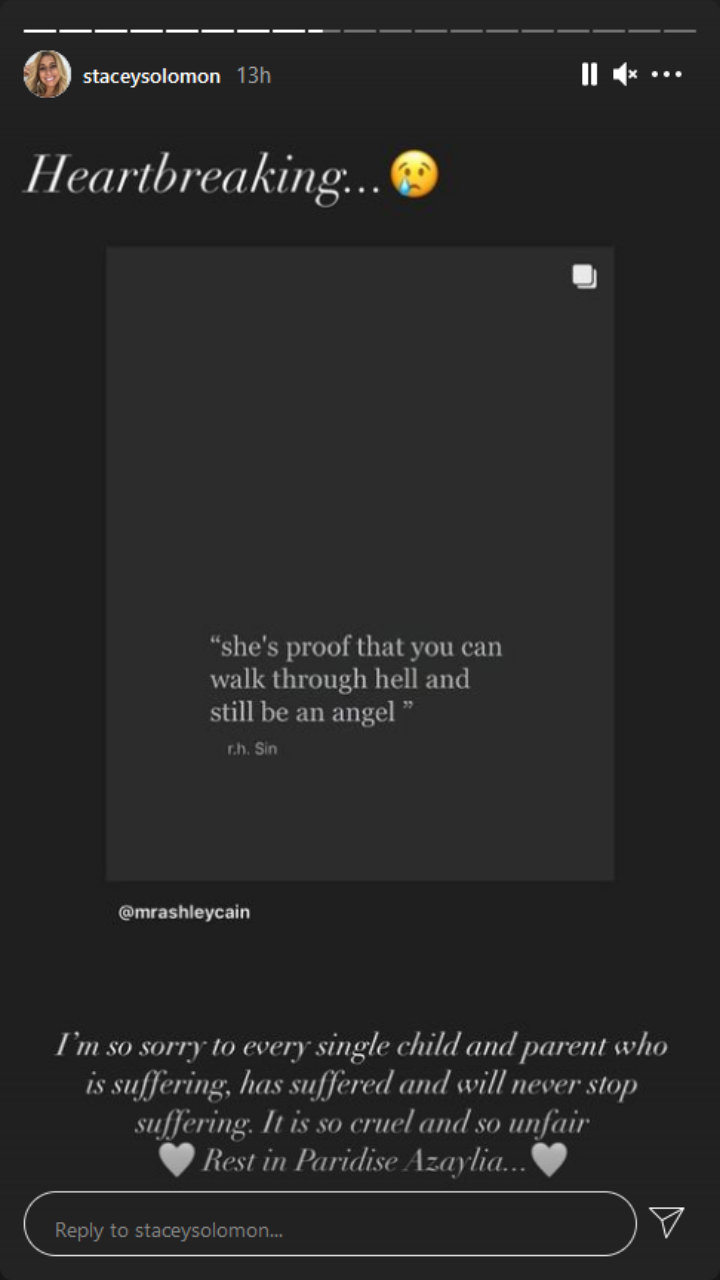 Aside from the Story, the “Driving Home for Christmas” singer also left a touching comment on Ashley’s post announcing Azaylia’s passing. “I am so sorry. You are incredible parents,” she wrote. “Sending strength and love to you and your family. Heaven just gained such a strong incredible angel.”

Azaylia passed away after battling with myeloid leukemia for most of her life. Confirming her death was her father Ashley, who shared the tragic news on Sunday. Posting a photo of himself hugging the 8-month-old, he wrote in the caption, “Rest In Paradise Princess. I will always hold you in my heart until I can hold you in heaven again [love] #AzayliaDiamondCain.”

Azaylia’s mother Safiyya Vorajee has also shared two pictures of herself hugging her beloved daughter. Along with the post, she added a caption that read, “You are my angel, my heartbeat, my soul, RIP my precious baby, you will always be with me like a handprint on my heart.”

The sad news came just two days after Ashley expressed his belief that his daughter can fight her illness. On Friday, “The Challenge” alum opened up that Azaylia’s medical team advised him to “make the most of the weekend” with her which made him confident that she won’t be “going anywhere.”

“I tell you what, I got no plans for her going anywhere this weekend. I’m an optimist. I’m a believer. I’ve got a positive mind frame and I know her strength. I know mine,” he stated at that time. “I ain’t thinking them things because I don’t have to be told to make a special effort to enjoy her because I enjoy her every day. I ain’t got no plans of this little one going anywhere this weekend, trust me. Let’s go champ, Let’s go.”