Seth Rogen destroyed Ted Cruz on Twitter after the TX senator decided to slam him as a ‘rich and angry Democrat.’ The comedian shot back with tweets about the ‘fascist’ Trump supporter.

Ted Cruz woke up on January 21 and apparently chose chaos. The Republican Texas senator, 50, started a fight with Seth Rogen for reasons unknown, tweeting out a screenshot of a tweet about President Joe Biden rejoining the Paris Climate Agreement (which Cruz thinks benefits Parisians). Rogen had responded “f**k off you fascist” to it. Cruz penned a response that spent less time slamming Rogen, more time condemning Democrats.

“Charming, civil, educated response ⁦@Sethrogen,” Cruz wrote. “If you’re a rich, angry Hollywood celebrity, today’s Dems are the party for you. If you’re blue-collar, if you’re a union member, if you work in energy or manufacturing…not so much.” It didn’t take Rogen long to shoot back with, “Haha get f**ked fascist. Go encourage a white supremacist insurrection again you f**king clown.”

For the record, Cruz is a graduate of Princeton and Harvard Law, and a multimillionaire who’s married to the managing director of Goldman Sachs. He was also one of the most fervent supporters of former President Donald Trump, an alleged billionaire who inherited money and a real estate empire from his father. Rogen never even went to college and, as he added in his response to Cruz, is a member of “four unions.” 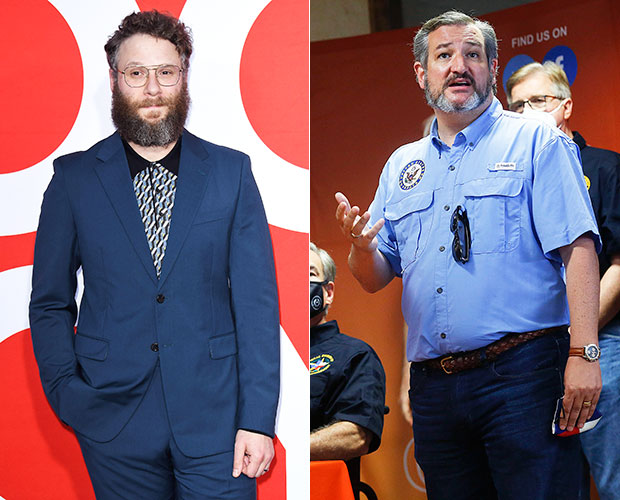 Maybe most egregiously, Cruz isn’t even pro-union. The senator supported national “right-to-work” legislation in 2016, a law that weakens unions. All workers in states that have adopted “right-to-work,” even those not in a union, lose an average of $1500 a year in wages, and are less likely to receive benefits like health insurance, according to the Center for American Progress Action Fund.

“If you’re a white supremacist fascist who doesn’t find it offensive when someone calls your wife ugly, Ted Cruz is the exact motherf**ker for you,” Rogen wrote in a second tweet to the senator — a reference to Trump attacking Heidi Cruz on the 2016 campaign trail. During the same election, Trump accused Cruz’s father of killing JFK and dubbed the senator “Lyin’ Ted.”

And yet, Cruz was in the Capitol on January 6 attempting to overturn the 2020 election results as a mob of MAGA-backed insurrectionists tried to harm him and his colleagues. Despite the attack on the Capitol and democracy itself, Cruz still opposed Trump’s second impeachment. He did show up to Biden’s inauguration on January 20.