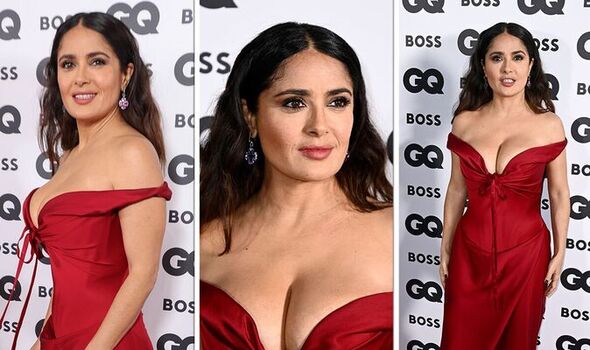 Salma Hayek appeared in a star-studded lineup at the annual awards show, walking the red carpet alongside Ben Whishaw and Stormzy.

Salma Hayek appeared in a star-studded lineup at the annual awards show, walking the red carpet alongside Ben Whishaw and Stormzy.

The stylish star poured her enviable curves into a figure-hugging red dress.

The satin material clung to Salma in a tightly-laced corset and A-line skirt.

Salma was dripping in glamour as she confidently strutted the red carpet, pairing her daring dress with emerald, ruby and diamond earrings.

The Hollywood A-lister is set to make a salacious return to the big screen next year in Magic Mike’s Last Dance.

Salma matched her lipstick to her daring dress

The gorgeous starlet emphasised her hazel eyes with dark eyeshadow.

Her daring gown featured a deep plunging neckline and off-the-shoulder sleeves, leaving her millimeters from disaster.

Salma was pictured attending the GQ Men of the Year Awards

The annual awards show pays tribute to the men and women spearheading their industries.

The star wore a mismatched pair of earrings

Salma’s earrings featured a large emerald on one side and a ruby on the other.

The actress spun around in her figure-hugging dress, showing off her curves.

Salma teased her fans with a steamy picture on Instagram

Salma revealed her starring role alongside Hollywood heartthrob Channing Tatum will be coming to screens on Valentine’s Day next year.