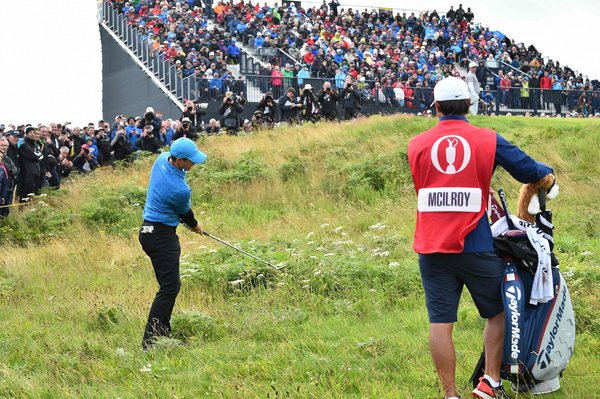 They say you can’t win a major on the first day, but you can lose it. Among those who may have lost the British Open at the Royal Portrush Golf Club in Northern Ireland quickly this year was a pretournament favorite, Rory McIlroy, who fired a quadruple-bogey on the first hole Thursday and finished the round at eight over par.

McIlroy was perhaps the most watched golfer in the days leading up to the event, both for being one of the best in the world, but also because he is from Northern Ireland and grew up playing at Portrush. He broke the course record there at age 16. There would be no course record from him on Thursday.

McIlroy’s first tee shot at his home Open went out of bounds, striking a fan and cracking the screen of her cellphone.

His next tee shot hit the deep rough, and he found tangled, unplayable greenside rough on his approach shot, leading him to take a drop.

Once he found the green in six, he did manage to get it in the hole in two putts.

“I hit my first shot out of bounds yesterday, but it went right, so that might have been in my head a little bit,” he said on the BBC. “I turned the ball over a little too much. It was a poor tee shot, but not that bad it deserved to go out of bounds.”

McIlroy had more trouble on the 16th, missing a six-footer for par and then a one-footer for bogey. The golf instructor David Leadbetter called it a “real junior golfer type of mental mistake” on the BBC.

For good measure, McIlroy triple-bogeyed the 18th, and finished the day with a 79, his hopes for a title squashed. Tiger Woods was only one shot better playing in the afternoon, with a seven-over-par 78.

There were no tournament-winning expectations on David Duval, the 2001 British Open champion. That Open was the last of his 13 wins on Tour.

But he started this year’s Open with two birdies, so he may well have looked forward to a good day on the course. It didn’t turn out that way.

Duval’s woes started with a quadruple-bogey on the fifth, throwing away his early gains. Incredibly, that wasn’t his worst hole of the day.

On No. 7, Duval shot an octuple-bogey 13. The score came in part because he hit the wrong ball.

The seventh hole is a 590-yard giant, one of two new holes added to the course for this event. Duval’s tee shot on the hole was feared lost, so he hit a provisional, and then another. Then once he actually got going on the hole, he mistakenly played the wrong provisional ball. That is a two-shot penalty. He then had to start the hole over, and that didn’t go a lot better.

The octuple bogey on the par-5 hole was initially feared to be worse, as the scoreboard operator, perhaps overwhelmed by the big number, initially posted a decuple-bogey 15.

Despite not making a cut on the PGA Tour since 2015, Duval, 47, who now plays a handful of tournaments a year, qualified for the Open as a former champion. That exemption will remain in place until he is 60.

Not every hole was terrible for every golfer Thursday. Emiliano Grillo of Argentina aced the 13th hole, the first hole in one at the British Open since 2016.

Victor Mather is a general assignment sports reporter and editor.