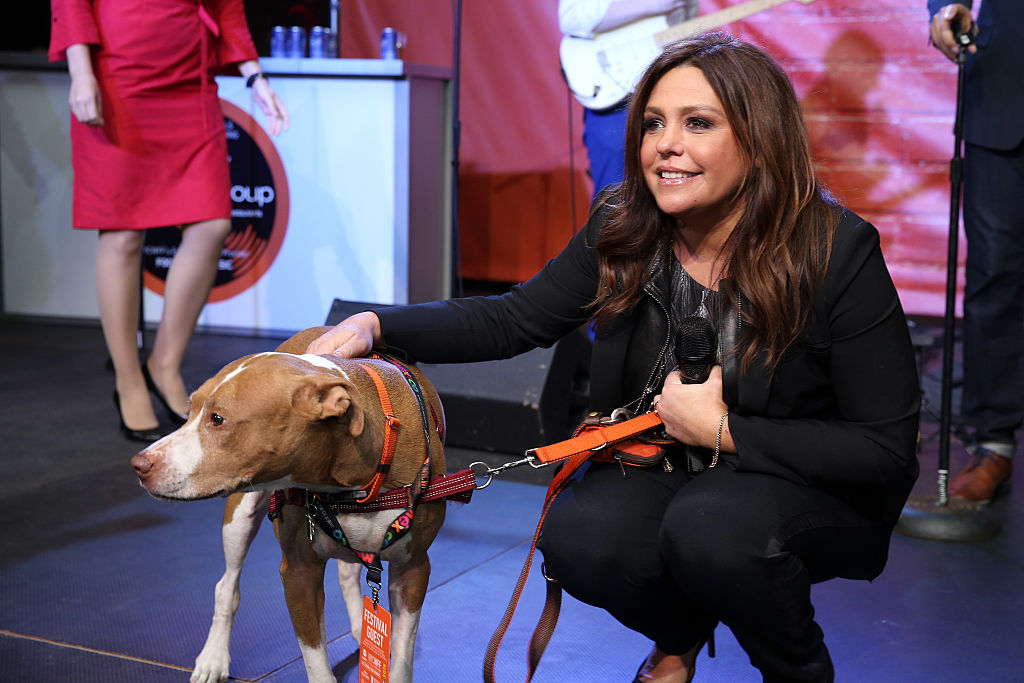 RELATED: How Did Rachael Ray Meet Her Husband, John Cusimano?

The Rachael Ray Show star is now thanking her fans for their heartfelt messages of support and condolences.

The beloved pet of Ray and the chef’s husband, John Cusimano, Isaboo passed away peacefully this week, in the arms of her family, Ray posted on her Instagram account.

Isaboo was clearly not just a pet to the 30-Minute Meals star and her husband. She was a loved member of their family.

RELATED: ‘Rachael Ray’: Her Celebrity Crush and Favorite Moment from the Daytime Show

“Our beloved Isaboo passed today in her backyard in the sun in the Adirondack Mountains in New York,” Ray wrote in her post. “In our arms. Peacefully. ⁣

The New York native asked that her followers, to honor Isaboo, would consider adopting a pet into their family.

“And today @johnmcusimano and I mourn the loss of a dog; a pitbull who taught us more about unconditional love, empathy, and understanding of one another than we could have ever imagined. ⁣ If you have room in your heart, your home, and your budget, I say from experience that bringing an animal in need into your home can help you become a better human being.”

Rachael Ray’s message to her fans

Ray experienced an outpouring of sentiment and support from her fans after the loss of Isaboo, or Izzy, as she was called. It touched the 51-year-old tremendously.

RELATED: Rachael Ray Was an Answer on ‘Jeopardy!’ and She’s Ecstatic

She sent a message to her followers on Twitter, saying “Thank you for the love and support. We feel like we have a family bigger then [sic] our zip code. Isaboo passed well and her soul must be overflowing with all the positive energy sent to her.”

Her fans filled her social media up with messages of support

Ray’s fans filled her social media accounts with messages of condolence and support.

“I feel so bad with that news,” said a fan. “She just crossed the rainbow bridge waiting for you guys”

From her supporters’ messages, it’s clear that Ray is not alone in her love of animals.

“Oh my friend, I’m so so so sorry,” another wrote…”my heart breaks into a million pieces for you today…We are all sending you our love and strength tonight and every day we will remember the beautiful soul and spirit of your beloved Isaboo.”

Another fan noted how much Isaboo meant to Rachael Ray, and it’s true. Watching her with her beloved pet, one could see the devotion and plain love she had for her companion.

“Absolutely soul crushed,” a fan expressed. “I’ve been a massive fan of yours for over fifteen years and know how much Isaboo meant to you. The loss of a beloved pet is pain I wish on no one- sending so much love to you all.”

RELATED: Rachael Ray Wants Us to ‘Keep Calm and Cook On’

Related posts:
05/23/2020 Celebrities Comments Off on Rachael Ray's Fans Flood Her With Condolences After Death of Her Pit Bull, Isaboo
Recent Posts
We and our partners use cookies on this site to improve our service, perform analytics, personalize advertising, measure advertising performance, and remember website preferences.Ok