Piers Morgan, 57, is known for his strong opinions and he couldn’t let the government’s latest antics go on without his comment. The TalkTV presenter admitted that he now fears for the “robotic” Liz Truss and her role as Prime Minister due to her “catastrophic” dealing of the mini-budget.

She’s completely out of her depth!

Piers shared his opinion on Liz’s first month as Prime Minister to his 7.9 million Twitter followers.

He exclaimed: “The more mini-interviews that robotic Liz Truss gives about her catastrophic mini-budget, the less impressive she sounds.

“I fear she’s completely out of her depth as Prime Minister.”

Social media users rushed to the comments to share their view on the PM’s latest decisions. 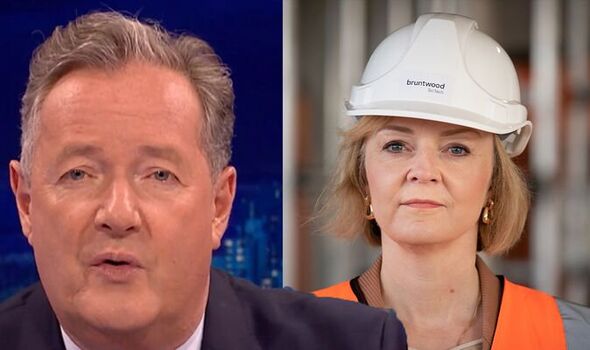 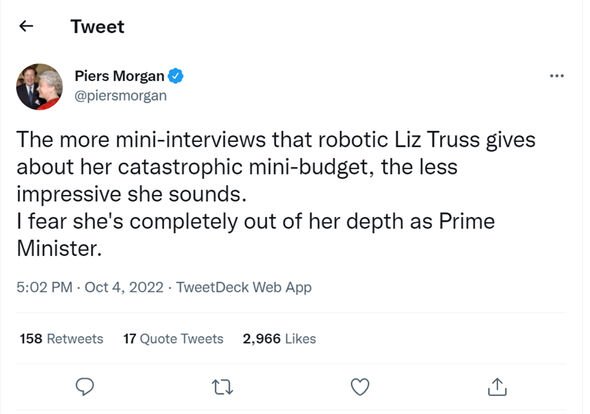 Navigator429 said: “No way! It’s almost like she has no experience of leading! These people wouldn’t get a top job outside of politics.

“A true leader would draft in experts in their respective fields vw its b4 just acting. Time for people to actually govern, not just hold office.” (sic)

McAveetA added: “Most of us thought that before she was voted for by her party.

“Which begs the question about either their judgement or motivation…” 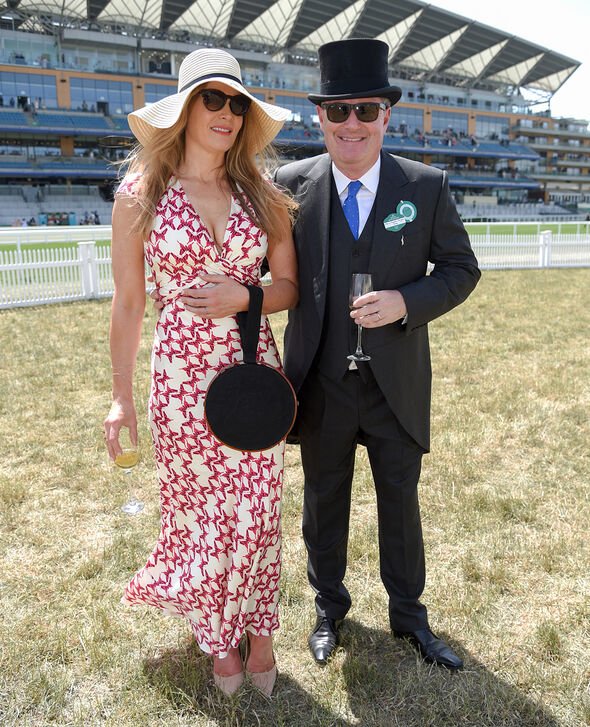 PaulRomaines commented: “Bit late to the party Piers. It’s been a month since she started but the Queen’s funeral kept her away from the public and press. Shambles.”

This comes as the Prime Minister is even struggling to persuade fellow Conservative MPs to back her controversial mini-budget.

Liz plans to cut the top rate of income tax and ram through public spending cuts and a real-terms drop in benefits to pay for them.

She has offered a sliver of remorse for the way the mini-budget was received after it led to a temporary collapse in the pound.

This is not the first time the former Good Morning Britain presenter shared his thoughts on the new PM.

Following the release of the new mini-budget last week Piers responded to the government’s handling of the economy as the pound hit a “record low” compared to the US dollar.

He said: “The Conservative Party used to be seen as a safe pair of hands for the British economy. Right now those hands are throwing down cash at a roulette table.

“And it’s not their money! It’s yours! With their massive tax cuts mostly for the rich.

“Prime Minister Liz Truss and Chancellor Kwasi Kwarteng have taken a reckless gamble with our economy.”

Piers stated that the gamble is “failing” as he said the pound has tanked to an all-time record low against the US dollar, adding that it’s not just inconvenient, but means people will “get poorer”.

He affirmed that economists are finding the situation “terrifying” before concluding his rant with a further dig at the PM.

Piers blasted: “Liz Truss is rolling the dice with our entire British finances.”