Piers Morgan, 54, issued a jibe at Prince Harry and Meghan Markle in view of his six million Twitter followers this afternoon. The outspoken Good Morning Britain presenter addressed the royal couple’s request for privacy while christening their son Archie Harrison Mountbatten-Windsor. The intimate ceremony took place today at Windsor Castle with friends and family in attendance. He wrote: “To respect their burning desire for privacy, I will be ignoring today’s royal christening.

“Of course, if everyone else did the same, there would be no more royal family & they’d never have to worry about their privacy being invaded again.”

Fans took to the comments section of Piers’ tweets as they aired their views about the new parents’ aim to keep certain elements of the religious event under wraps.

One wrote: “If they want to keep their lives private DON’T pay for it out of the public purse.”

Another added: “We probably won’t get any pics of the cottage we’ve renovated either.”

However, some pointed out Piers was breaking his vow to ignore the christening by posting the tweet.

A fan joked: “*ignoring today’s royal christening with the exception of this tweet.” 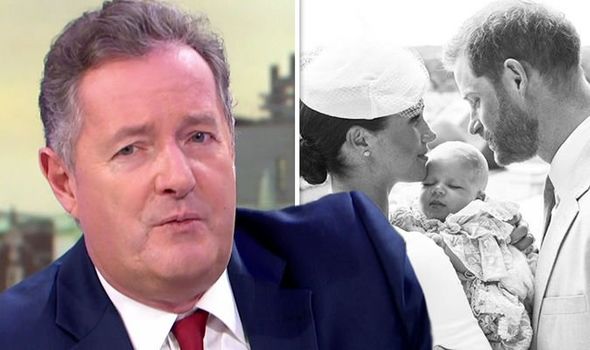 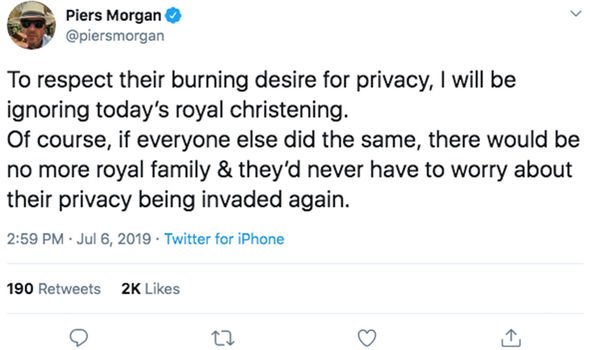 Earlier last week, the TV personality responded to the news about Meghan and Harry’s decision to keep the names of the royal baby’s godparents under wraps.

Piers initially spotted a report about the christening on the micro-blogging site, which was shared by royal journalist Victoria Murphy.

She wrote in view of her 41,000 followers: “Archie Harrison Mountbatten-Windsor will be christened by the Archbishop of Canterbury in the Private Chapel at Windsor Castle on Saturday 6th July @RoyalFamily confirms. Chris Allerton will be taking images that will be released later. The godparents will not be announced.”

In response, Piers shared the news and accused the couple of “playing games”. 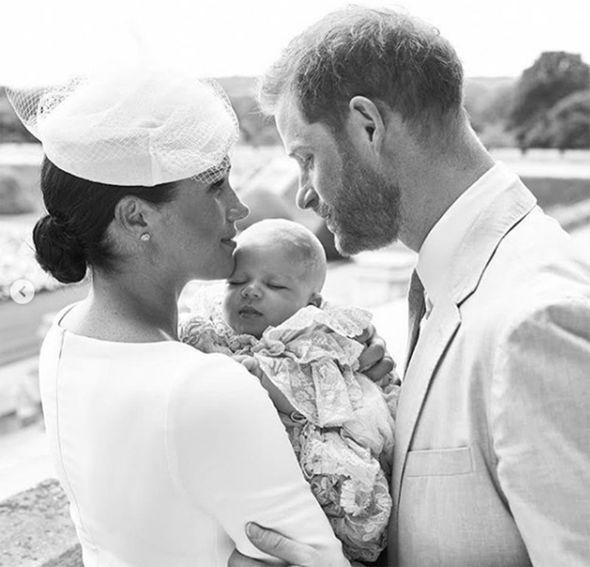 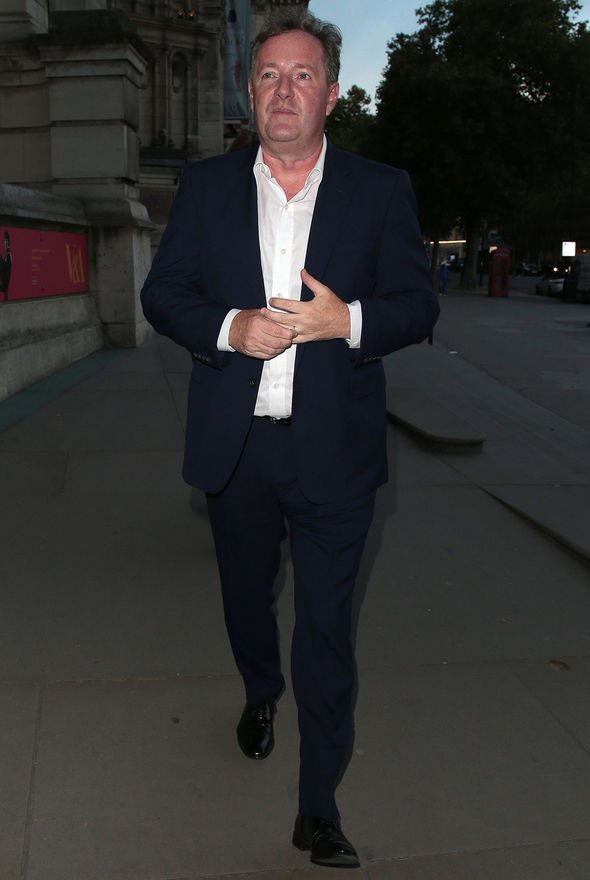 He added the caption: “Harry & Meghan need to stop playing these dumb cake-and-eat-it games with the media/public.

“If you want your home costs paid by the taxpayer, you reveal this kind of info. That’s the deal.”

The former actress came out of her maternity leave to be present for the Trooping of the Colour but didn’t attend any royal events involving the US President.

“And that, I’m afraid, is unacceptable.”

Good Morning Britain airs weekdays at 6am on ITV.

07/06/2019 Celebrities Comments Off on Piers Morgan: ‘Ignoring the christening’ Star hits back at Meghan Markle and Prince Harry
Recent Posts