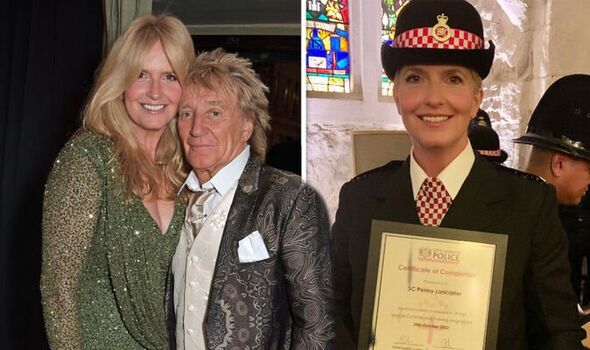 Penny Lancaster marked the completion of her special constabulary training after joining the force last year. Earlier this week, she was supported by her rockstar husband Rod Stewart, 77, their younger son Aiden and her parents at the special ceremony where she was all smiles after finally receiving her certificate.

In a new interview, the former model discussed what her husband really thinks of her role and how it felt swapping red carpets for policing.

She went on to add that while her spouse is very supportive of her new role, he has at times told her to ‘remember you have duties at home too’.

Being the long-term wife of a rockstar, Penny has been used to the glitz and glam for many years.

She married the Maggie May hitmaker back in 2007 and they share two sons together; Alastair, 16, and Aiden, 11.

Swapping an enviable lifestyle for life-risking antics is something Penny has described as “craziness”.

Speaking to the Daily Mail, she added: “One day I’ll be on the red carpet at some do thinking, ‘Last night I was putting handcuffs on someone in custody’.”

On how it was “compatible” with her family lifestyle, Penny went on to say: “Maybe it wouldn’t have been in my 30s, but it’s a bit different now.”

Her double life has been frowned upon by some of her colleagues who told her they had questioned how long she’d stick at it for.

No offence was taken by Penny however as she admitted she appreciated the honesty, adding: “Everyone has each other’s back.”

The former model has high hopes to continue doing the job she loves until she is at least 60.

Such bravery and leadership, she says, started from a young age when she was put forward in situations due to her height.

“I was always the tallest in any group,” she explained.

“I think I’m quite a calm person, good at talking to people, and our training tells us that our most effective weapon is our voice.”

While Penny has handled the role well so far, she admitted there was a time when she was “utterly petrified” when dealing with a drug-driving offence.

Reading out the caution during arrest was something she said had to be “drilled into” her.

“I learned it and learned it until I was saying it in my sleep, but when it came to do it for real, your mind goes blank. I got through it though.”

Penny first experienced what it was like being an officer on the streets in the Channel 4 show Famous And Fighting Crime.

Most recently, she patrolled the streets in her uniform during the Queen’s funeral.

Speaking to PA News, Rod’s wife said she wouldn’t have missed it “for the world”.

She added: “I think it’s [the same reason] why every officer wanted to be here today, because we swore an oath to the Queen to serve in the office of constable. This is the biggest honour of all.”