The Mets began their final home stand before the trade deadline with two bold additions: Chick-fil-A advertisements running vertically up the foul poles — or fowl poles now, it seems — at Citi Field. Presumably in the next week, General Manager Brodie Van Wagenen will be just as active as the team’s ad sales staff.

Van Wagenen needs to add vital long-term talent by subtracting from the major league roster. He tried a quick fix after becoming the G.M. last fall, trading prospects and signing veterans. By the time his centerpiece, Robinson Cano, erupted for three home runs on Tuesday, the season had already dissolved into a well-intentioned failure.

A.J. Preller, the general manager of the visiting San Diego Padres, can relate. The Padres are enduring their ninth consecutive losing season — they are 47-53 after Tuesday’s 5-2 loss to the Mets — but their direction is clear.

“We feel like, right now, we’re interesting,” Preller said on Tuesday. “We have a talent base. Every night, you can see some players that are performing right now and some guys that we think are going to continue to get better in the next few years. But we’re still not where we want to get to.”

Like Van Wagenen, Preller quickly commanded attention when he tried to build an instant contender after his hiring in August 2014. He collected established stars with a flurry of trades and signings, a noble effort that had almost no effect in the standings.

Preller’s initial moves cost the team some players who would blossom into solid major leaguers, like catcher Yasmani Grandal, shortstop Trea Turner and starter Max Fried. But when the Padres realized their plan had flopped, they reversed course.

They traded veterans for prospects, acquiring Fernando Tatis Jr., Manuel Margot and Chris Paddack, among others. They spent aggressively on two Cuban pitchers, Adrian Morejon and Michel Baez, who made their major league debuts this week. Their farm system ranked as the majors’ best before this season.

“We talked about that at the beginning of the year: We’d rather be young and talented than experienced and lacking in talent, which maybe in ’16 and ’17, that’s where we were,” Manager Andy Green said. “It’s insane the 20-to-24 age group we have here at the big-league level right now. And those guys, every time they step on the field it’s like, ‘I see why he’s here.’”

The downside is that the Padres were terrible for the last three seasons, losing at least 91 games each time. The Mets fear that kind of protracted rebuild, but they also fear spending for free agents the way the Padres have done.

Because the Padres assembled such a deep stable of low-cost young talent, they have signed two players to deals richer than any the Mets have ever given. San Diego gave first baseman Eric Hosmer eight years and $144 million before last season and lavished a 10-year, $300 million deal on infielder Manny Machado this February. 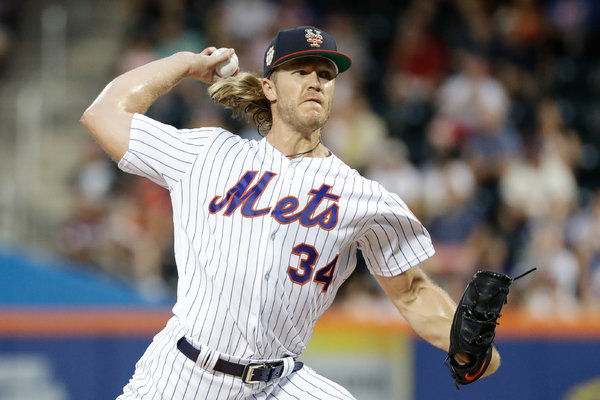 Hosmer had a disappointing debut in San Diego but is back to his usual Keith Hernandez impression: a left-handed Gold Glover who hits fewer home runs than a typical first baseman but makes up for it with leadership and a solid batting average. (Yes, Hernandez walked more and struck out less, but go with it.)

Machado started slowly, with a .240 average through June 12. But in his last 30 games before this series, he hit .320 with 15 home runs. The stretch overlapped with Machado’s 27th birthday.

“He’s been the guy we’ve anchored ourselves around, in the lineup-construction sense, every single day,” Green said, adding that Machado has starred on defense. “And clubhouse-wise, he brings in an expectation to win and win now.”

The Mets surely felt that trading for Cano would bring them the same kind of presence. But Cano is almost 10 years older than Machado, and he failed a test for performance-enhancing drugs last year. To get him and closer Edwin Diaz from Seattle, the Mets parted with two of their best prospects, Jarred Kelenic and Justin Dunn.

Yet at the start of this series, only one National League team — the hapless Miami Marlins — had a worse record than the Mets. Are they finally willing to face that reality?

Trading Todd Frazier, Jason Vargas and Zack Wheeler, all nearing free agency, would not be a sufficient shift. Trading starter Noah Syndergaard, who is under team control through 2021, would. Syndergaard has been inconsistent but has the stuff to tilt any team’s chances in October. The Mets should stage an all-out auction and reap a bonanza in return.

With Machado in town, though, a big-picture question is perhaps more nagging: Will the Mets owners ever have it in them to pursue a major free agent from another team? The Wilpons committed to an overall payroll this season that is far richer than the Padres’ — roughly $158 million compared with $97 million — but their investments are dubious.

The Mets are paying more than $83 million this season to a group of nine players who have given them very little: Cano, Yoenis Cespedes, Jeurys Familia, Jed Lowrie, Juan Lagares, Wilson Ramos, Justin Wilson, Travis d’Arnaud and Keon Broxton. The lesson, as always: It’s not how much you spend, but how you spend it.

Cano’s big Tuesday night was a respite from his usual spot in the Carlos Baerga/Roberto Alomar quicksand, where a star second baseman’s productivity abruptly ends upon his arrival in Queens. Machado cost a lot more money than Cano, but he would not have cost any prospects. And he presented something close to a sure thing.

“There were a lot of unique situations that came up — the position the organization was in with the talent, not a lot of committed dollars on the books, and he was already an established superstar at 26 years old,” Preller said. “He’s a two-way player, and especially at third base, we didn’t have an immediate guy to step in and play for us. All those reasons lined up pretty well.”

The Mets have never given a contract worth more than David Wright’s $138 million, and they were not about to do so for Machado. The Padres have not won with him yet, and are not close to being a superpower like the Los Angeles Dodgers.

But at least they know where they are heading. The Mets cannot say the same.