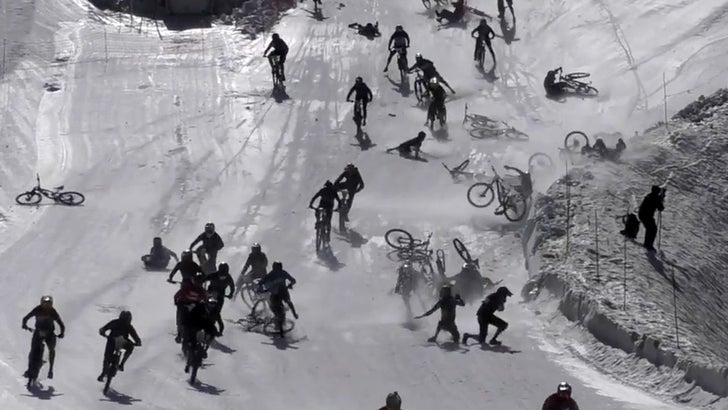 Terrifying crash during the annual “Mountain of Hell” bike race in France … where chain reaction pileup sent bikes and bodies flying EVERYWHERE — and it was all caught on video.

Miraculously, nobody was seriously hurt in the wreck … but good lord, this is insane.

It all went down at the Les Deux Alpes ski resort — where roughly 1,000 cyclists with a death wish race down an 11,000 glacier in snow covered terrain … first to the bottom wins.

But, things went awry right out of the starting gate … when one biker toward the front of the pack lost control, sending other cyclists crashing into each other.

One guy actually started ROLLING DOWN THE SIDE OF THE MOUNTAIN!!!

Some of the riders dusted themselves off and got back on their bikes. Again, somehow no one was seriously injured, according to reports.

Props to the winner Kilian Bron … who got to the finish line so fast, there were barely any fans waiting for him!!!