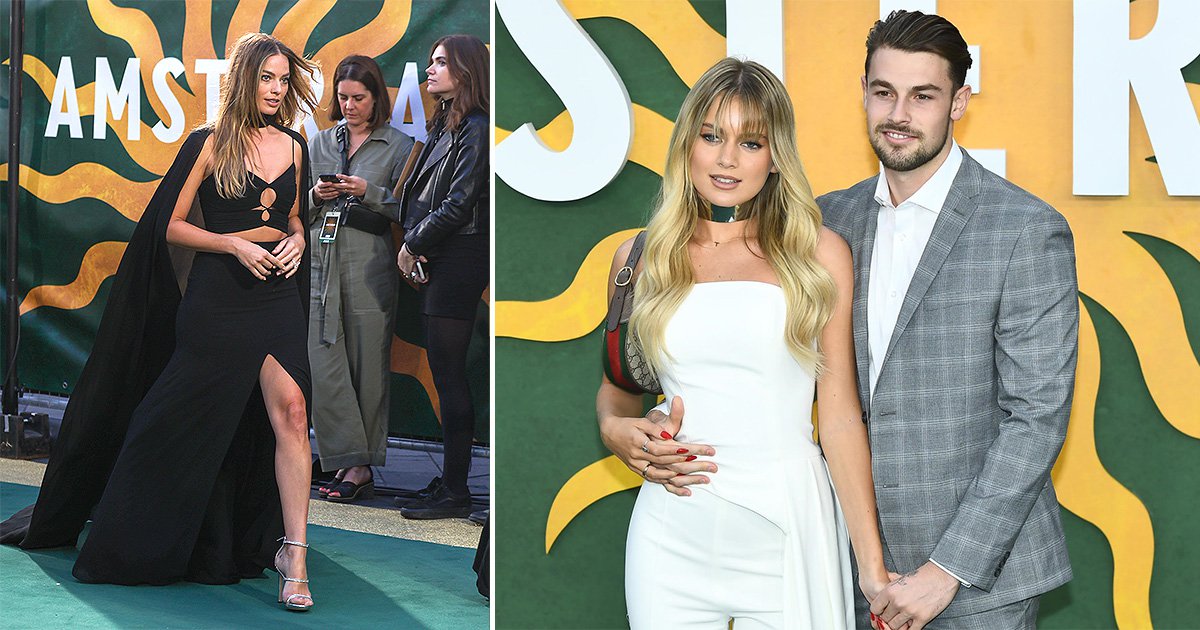 The stars of this year’s Love Island rubbed shoulders with some top Hollywood A-listers at the premiere for Margot Robbie’s new film in London.

Luca Bish, as well as Andrew Le Page and Tasha Ghouri were invited along to the premiere of Amsterdam in the capital’s Leicester Square on Wednesday night.

Set for release in October, a lucky few were able to catch a first look at the film at the UK premiere this week, with Luca, Tasha and Andrew looking on top of the world.

Luca went stag to the premiere, with no sign of Gemma Owen despite the pair having made their relationship official with an OTT, choreographed ‘proposal’ last month.

The fishmonger grinned for the camera as he posed in a smart-casual black shirt and trousers and white tee.

Tasha and Andrew meanwhile looked as loved-up as ever, posing easily with each other as they smiled photos, clearly comfortable having spent the entire summer in front of the cameras.

Andrew had on a grey-checked suit and white shirt and wore his hair slicked back for the premiere, while Tasha looked gorgeous in a white jumpsuit and green collar, her blonde hair in loose waves down her shoulders.

The pair posed in front of a massive sign bearing the film’s name, before stalking down the green carpet amongst the crowds eager to catch a glimpse of the film’s cast.

And those crowds were not disappointed, as some of the movie’s biggest names travelled to the UK for the special premiere, taking the time to hang out on the green carpet and pose for photos.

In one picture, actors Andrea Riseborough, Rami, Margot and Christian posed together in front of the massive Amsterdam sign, each dressed in matching black outfits.

Rami looked sleek in an all-black suit, including a pitch-black tie, while Andrea wore a glittering midnight dress with a plunging neckline.

Leading woman Margot looked incredible in a cut-out crop top and slit skirt which trailed along the floor, as well as a cape.

Meanwhile, former caped crusader Christian (that title has now been taken by Margot) opted for a more traditional get up with an all-black suit.

Set for release in cinemas next on 7 October, the hugely anticipated period comedy is directed, produced and written by filmmaker David O. Russell.

It follows three friends – a doctor, a nurse, and a lawyer – who become the prime suspects in a murder in the 1930s.

Following the premiere, the stars headed to an exclusive after-party in London’s lavish Mayfair area, with Luca, Tasha and Andrew again spotted arriving together.

Looking to be in good spirits after catching a first look at Amsterdam, Luca could be seen grinning as he looked back at his two pals, with the trio first meeting earlier this year on the reality dating show.

Tasha and Andrew, as ever, clasped hands as they strolled the streets of the capital, Andrew proudly flashing a smile at the camera.

The film’s stars also showed up to party after their second premiere in a week, with Rami looking proud and confident as he was led into the event by a staff member.

Australian actress and all-round icon Margot, meanwhile, stepped out of her all-black caped outfit for the after-party, opting for a more casual – and colourful – attire.

She was seen stepping out of a car in an oversized pinstriped shirt, thigh-high leather boots and a bright red handbag, looking gorgeous as she was snapped in peals of laughter.

Amsterdam may be highly anticipated, but not quite on the same level as Margot’s other upcoming film – Greta Gerwig’s Barbie, which stars the actress as the legendary doll.

Production wrapped on the Barbie movie in July and the cast, which also includes Ryan Gosling as Ken, enjoyed a star-studded party to celebrate.

‘He’s going through some stuff.’

There’s still a long wait ahead however, as fans won’t be able to catch Barbie in cinemas until July 2023 – so Amsterdam will do for now.