Liv Tyler has spent a lot of time thinking about where nature ends and nurture begins.

Most recently, it’s because Ms. Tyler’s American children have started speaking with an English accent. (She and her partner Dave Gardner, a sports agent, moved to London with their family in 2016.) Despite capitulating to many of the United Kingdom’s peculiar traditions, like using the word “boot” to describe what is clearly a “trunk,” Ms. Tyler said she still tried, at least initially, to maintain a sort of bilingual household.

“Every time they would say something in the English way, I would sort of repeat it and say the American word, too,” Ms. Tyler said over a glass of white wine at Cafe Cluny, near her West Village townhouse, during a recent trip to New York City. “But you can’t help it, when you’re there. You have to speak in the way that they’ll understand. There’s so many different things. Like when you have a break from school, they call it ‘breaking up.’ They’ll say, ‘When do you break up?’ And I go, ‘What are you talking about? I don’t understand.’” 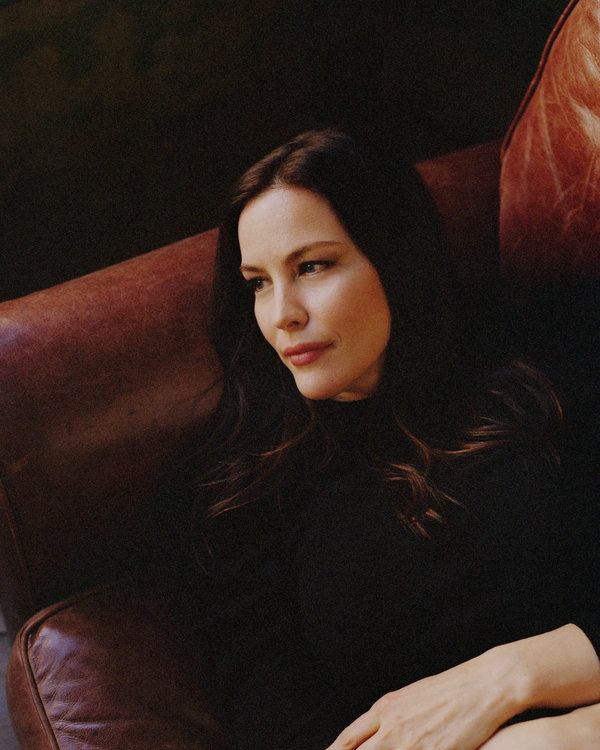 Though Ms. Tyler says she “can’t remember the last time I went on an actual vacation,” she said she does occasionally get a few hours off to do nothing — at least until the plane lands.

“I just flew to LA and I was like, ‘Oh. Ten hours. Bliss!’” Ms. Tyler said. “I usually only go away from the kids when I’m working, but that in itself is a vacation because it’s exploring a different facet of myself, a part of being a woman, a mom.”

A few years ago, Ms. Tyler, primarily a film actor — she’s best known for “Empire Records,” “Armageddon,” “Stealing Beauty” and the “Lord of the Rings” trilogy — surprised herself by connecting with prestige television, starting with a role on Showtime’s “The Leftovers.” After reading the pilot, Ms. Tyler, then a 37-year-old brunette, decided she wanted the role of Meg, which was initially written as a “26-year-old redhead.” She got the part, sending her on a three-season character arc she says she could have never foreseen from the pilot. Most recently, she’s been acting on Hulu’s “Harlots,” the 18th-century period drama about British prostitutes now entering its third season, which shoots in the U.K. Among other things, the show has her thinking about how women relate to the world — and each other.

“I feel like women are so often times, quite judgmental and negative toward each other, more than men are toward women,” she said. “Sometimes I think it’s important to stop and take stock of that, how quickly we can gossip or make assumptions about other women.”

But Ms. Tyler also understands that assumptions are not always wrong, especially when nature is involved. After all, she was just nine years old when she went backstage at an Aerosmith concert and positively identified its frontman, Stephen Tyler, as her biological father just by looking at him. Before that, she’d been under the impression that her father was a different rock musician, Todd Rundgren, who is listed on her birth certificate and who raised her as his own. But once she saw Mr. Tyler in the flesh, there was no denying that face, nor the wealth of mannerisms she’s since found she shares with her father and other members of the extended Tyler family.

“There are certain things that we all do, movements. I can’t even explain it,” Ms. Tyler said. “It’s like seeing a dream in front of your eyes. It’s very enjoyable.”

In 2017, Ms. Tyler and her father underwent genetic testing for an episode of “Who Do You Think You Are,” revealing at least five generations of musicians and performers before them in their family tree. Ms. Tyler wasn’t surprised in the slightest.

“I have sisters and brothers from him, but who, if I didn’t know them and they walked in the room, we look like the same person,” Ms. Tyler said. “We have different mannerisms, similar things that just go a few generations back. And some of these photos, you think, ‘Oh my God.’ It’s so powerful, our genetics.”

Living in London has only served to highlight those similarities in her children, Milo, 14, Sailor, 4, and Lula, 2.

“I really see what parts of them are genetic and in them innately and what parts they are learning from the dynamics of the family, and what is from the country they’re in,” Ms. Tyler said. “But then there’s a whole other something that is just a hundred percent them.”

Whatever dominant trait is ultimately responsible for making someone a dynamic celebrity, Ms. Tyler certainly seems to have inherited it from her father. After getting into acting early on, by 1999 (when she was 22) she was at a place where she could wear a T-shirt to the Met Gala and wind up on the cover of a fashion magazine, which is exactly what happened when her friend, Stella McCartney — a designer and the daughter of Beatles rocker, Paul McCartney — called her up and invited her out for a night on the town.

“Stella called me up and said, ‘Do you want to go this fashion thing with me,’” Ms. Tyler said. “I had no idea what it was. I’m sure we did our own hair and makeup.”

Ms. McCartney showed up with two matching one-shoulder T-shirts with the text “Rock Royalty” bedazzled on the front that she had commissioned from Filth Mart on the Lower East Side.

“Everyone was in a beautiful gown, and very chic and expensive and dressed to the nines. And there we were, rocked up in these T-shirts from the Lower East Side,” Ms. Tyler said. “We got a lot of strange glares and snarly looks.” However, the next day they were on the cover of Women’s Wear Daily.

Fast forward twenty years, and Ms. Tyler is still wearing designs by Ms. McCartney — and still bringing a touch of rock royalty to upscale events, most recently at the (actual) royal wedding of Princess Eugenie of York, which she attended alongside friends including Naomi Campbell, Kate Moss, Demi Moore and Cara Delevingne.

But despite her high-profile social scene, Ms. Tyler says the majority of her life in London can be divided between time spent with her family and time spent on set — and not always in that order.

“I’m always striving to achieve balance, which I think is a very tricky thing in the world today in general. I think our society is not really set up for balance, a lot of extremes going on,” Ms. Tyler said. “The hardest thing, the biggest challenge for me, is managing my time. I think I overextend myself. I am bit of a perfectionist. I want to be as available as I can for everything in my life. I can’t help it.”

Ms. Tyler says she used to leave the most important things for last, clearing the smaller items off her to-do list first, until a friend helped her reframe her priorities.

“This person said, ‘No. You’ve got to roll the big boulder first. And then you can mess with the pebbles,’” Ms. Tyler said. “If you just get that biggest boulder done first, then the rest of the day goes in a very different way. If you’re chasing yourself, you can’t get it all done. There’s never enough time in a day. But it’s so easy, there’s so many little things, that it’s easy to get distracted.”

Ms. Tyler said she has been a “very curious person, a very observant person” since her childhood, which she spent alternately living with her mother, Bebe Buell, and her grandmother, the etiquette expert Dorothea Johnson, before discovering the truth of her parentage.

“I’ve definitely grown up with a nice, eclectic mix of parental figures and family members,” Ms. Tyler said. “I’m always asking a lot of questions everyday, whether I get in a taxi or I go in the store or I’m sitting with you. I tend to ask a lot of questions so that I can understand the world more, people more. It’s fascinating, people, how they think, how the brain works.”

Ms. Tyler has tried to turn that relentless probing inward. To put it bluntly, fame — something she’s had her entire adult life — makes her anxious. But she loves doing the work that gets her there.

“The happiest I’ve ever been is making a Robert Altman film with all these amazing actors and two cameras going,” Ms. Tyler said, referring to the 1999 movie “Cookie’s Fortune.” “That’s why I fell in love with acting. Not because I wanted a lot of attention or I wanted to be a big star. I definitely struggle with that aspect of it. I feel most comfortable in a creative process. That’s where I get the biggest thrill and rush and connection.”

It’s a paradox that prompted her to start working this year on cognitive behavioral therapy, a technique that focuses on correcting harmful thought patterns. Ms. Tyler tends to look at her new projects not only as an artistic pursuit but as a way of examining herself and her life through a new lens.

“That is definitely the great puzzle and mystery of my entire life. I’m always trying to learn as much as I can about myself, both from my mind and anxiety in general. I definitely have a side to me that’s very shy, or shy in certain situations. I’m better one-on-one, I think,” Tyler said. “I’m trying to articulate it. I’m still trying to understand it.”