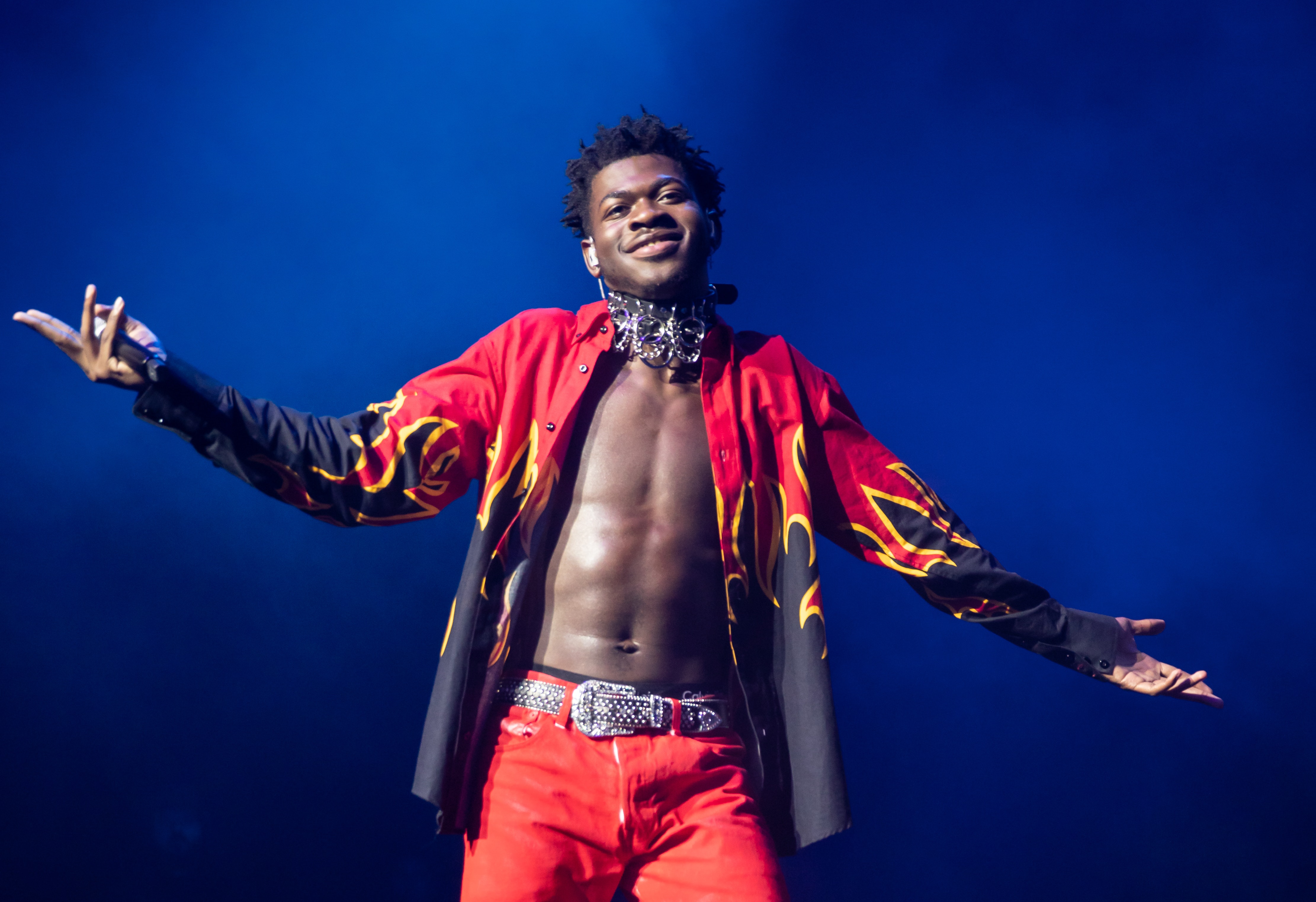 Are you even a celebrity if you’re not stirring things up? With his new hit single "Montero (Call Me By Your Name)" — and its accompanying video — Lil Nas X is making people talk. The video, released on March 26, received both praise and backlash on social media for its transgressive depiction of Christian heaven and hell, filtered through queer identity: Lil Nas X reenacts the biblical fall of man (playing the role of Eve, not Adam), dies and (briefly) ascends to heaven, and then chooses to descend to hell — where he gives Satan a lap dance in thigh high stiletto boots. Alongside the video, the rap singer-songwriter and man-about-Twitter released an exclusive sneaker in partnership with the art collective MSCHF. All 666 of the limited edition “Satan Shoes,” supposedly containing a drop of human blood, sold out in under a minute.

In response to the video, many lauded Lil Nas X for his brave and potentially transformative depiction of the relationship between Christianity and queer identity. Others, including celebrities and politicians, condemned the work as sacrilegious, especially the depiction of hell as a site for liberated queerness. Critics suggested the video promoted satanism, and Gov. Kristi Noem of South Dakota claimed on Twitter that the video’s imagery was emblematic of the “fight for our nation’s [Christian] soul.” It was too ironic: Huge swaths of Christianity suggests that queers will go to hell, yet Christians are angry when a queer person accepts that, moves in, and decorates.

The church berates LGBTQ+ people. It tells us, incessantly, that if we choose to live authentically as queer people, we will literally go to hell. To that, Lil Nas X said, if I am going to hell for being myself, I will gladly do so and make that sh*t gay.

By offering a version of hell that is erotic and that embraces queerness, Lil Nas X undermines the darker visions of hell used to scare LGBTQ+ people into straightness. Lil Nas X is not saying, “LGBTQ+ people are going to hell,” rather, he is reimagining the relationship between perceived sin and punishment. With one Satanic lap dance, he refuses to repress who he is for the sake of Christian comfort or out of fear of retribution. He rejects the notion that hell is a place to fear at all. His parody of hell invites marginalized queer and trans people to drop their fears and be their fullest selves in this life.

This message could not be more timely. On March 29, Arkansas passed a bill that will ban hormone treatment for trans youth in the state. It’s part of a wave of anti-LGBTQ+ legislation being proposed around the country — per CNN, at the start of 2021, lawmakers in 14 states were pushing legislation aimed at restricting the rights of LGBTQ+ people, and particularly trans kids and teens. These bills, their content, and their approval are inextricably linked to the church’s position regarding LGBTQ+ identity.

Certain Christian denominations have always wielded Hell as a tool to marginalize people in the name of God: they perpetuate and justify anti-Black racism with the Hamitic myth, which ascribes dark skin to a biblical wrongdoer. Women are subjugated as punishment for Eve’s original sin (that sin being the acquisition of knowledge, of course). Passages originally condemning inhospitality and violence have been twisted to villianize gay people. This would imply that heaven ascribes to white supremacy — if you’re not inherently “sinful” because of your race, gender, or sexual orientation, it’s that much easier to get into heaven. The Black church, also responsible for spreading transphobic and homophobic messaging, is in need of reform as well. Many Black LGBTQ+ Christians feel deeply tied to their faith, yet they are confined to congregations that refuse to accept them.

When we sanctify oppression and consecrate hatred, we contribute to toxic norms that harm both bodies and souls. According to The Trevor Project, LGBTQ+ youth represent only 5-7% of all American youth but 40% of youth experiencing homelessness. Many young LGBTQ+ people are homeless as a result of family rejection. Where do those families learn that queer and trans people are evil? Bad theology shapes our corporeal reality, and religious homophobia and transphobia have consequences far beyond the pews.

As a child of the pentecostal church, I know the pain of religious homophobia intimately. When I was 16, a pastor called for youth “struggling with sexual perversion” to come forward to the altar for confession. I watched with horror as kids confessed to sexting, watching porn, and being gay. At this point, my queerness sat unacknowledged, just below my recognition. After witnessing that unsettling coerced confession, I buried my queerness deeper, hid it with more intention. I remember going home from that service and writing “I think I am gay,” in my diary. I stared at the words for a moment. Then, I scribbled it out until the page was filled with a large black circle. It took me four years to write those words again.

Now, as an adult and a Black queer theologian, I know that God grieves the oppression of LGBTQ+ people. I know that God stands with and for all marginalized and oppressed, because otherwise how could anyone trust God? I believe in a God who does not threaten us with punishment and damnation, but rather asks us to see ourselves and one another with expansive compassion. We undo the work of God when we preach bigotry in God’s name.

Churches that peddle transphobia and homophobia accrue and maintain power through fear. That’s why some Christians are so angry at Lil Nas X. With his art, he declared that living one’s truth in this life will not induce suffering in the next. You can’t control people who are no longer afraid. But, most importantly, they are angry because Lil Nas X, a Black gay man, boldly claimed his right to exist in this intangible religious space.

Hell belongs to the queers. And, heaven does too. The ethereal — and diabolical — is ours to disrupt, imagine, recreate, and reclaim. If mainstream religion can claim a homophobic and transphobic God, we can claim a God that celebrates us in our entirety. Lil Nas X opened the door for queer kids everywhere to break free of religious narratives that would ask them to be anything less than whole.