A few hours before being seen with the family, the ‘Goosebumps’ rapper was spotted partying without his baby mama at megaclub E11even in Miami at nearly 4 A.M.

AceShowbiz –Kylie Jenner and Travis Scott (II) are showing a united front, along with their kids, on Halloween Day. The couple looks happy in a sweet family photo posted after rumors that the “Goosebumps” rapper cheated on “The Kardashians” star with his alleged old fling Rojean Kar.

On Monday, October 31, Kylie turned to her Instagram Story to post an adorable family photo including Travis and their two children, 4-year-old Stormi Webster and 8-month-old baby boy whose name they have yet to share since it was changed from Wolf. 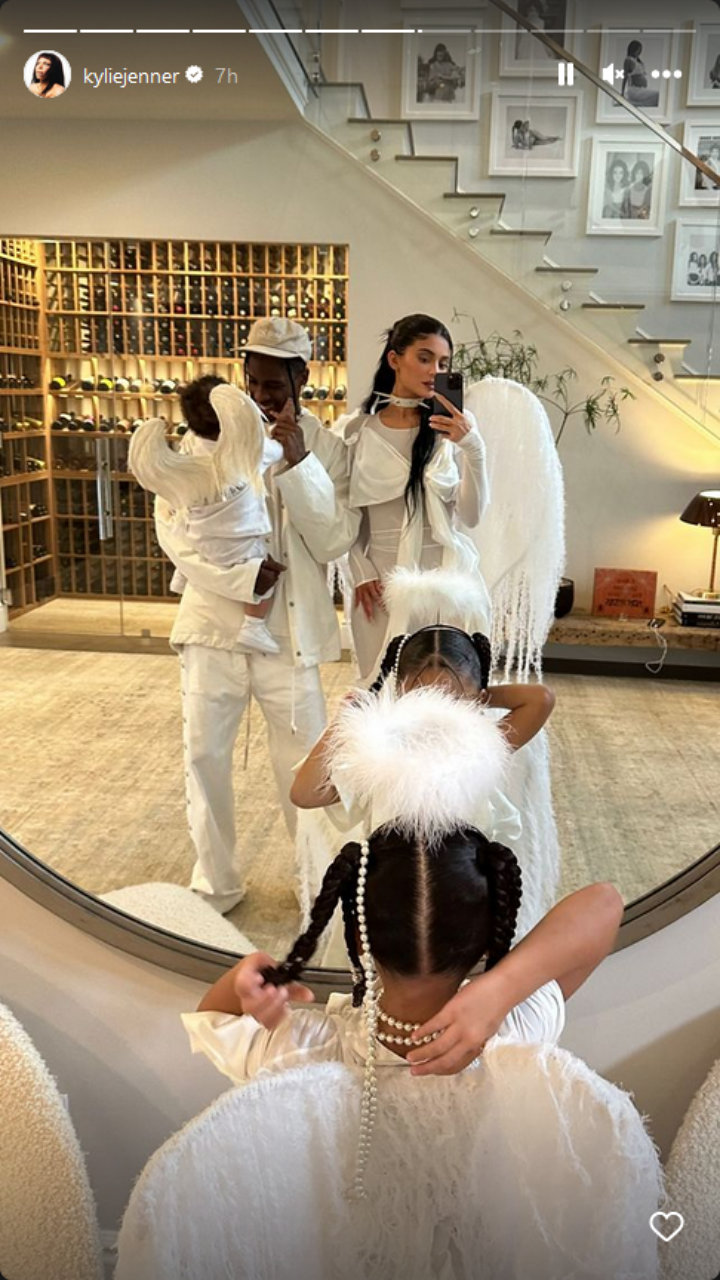 In the snapshot, the four wore all-white outfits with Kylie, Stormi and the baby boy all sporting angel wings. For the 25-year-old mom, she completed her outfit with a white choker adorned with spikes, while Stormi accessorized her ensemble with a pearl necklace.

The boys also kept in tune with the theme. Travis sported a white jacket and shirt with white pants, topped off with a beige hat. The baby boy, meanwhile, donned a cute little pair of angel wings as he gently touched his dad’s cheek.

Kylie also posted a video of Halloween-themed snacks served at her “get-together,” including cupcakes with skulls on them and pigs in a blanket with eyeballs. “We are doing a little Halloween get-together before trick or treating,” the Kylie Cosmetics founder said in a video. “How cute are these.”

Prior to celebrating the festivities with his little family, Travis was caught partying in Miami without Kylie. A source spilled to Page Six that the “SICKO MODE” rapper headed to megaclub E11even at nearly 4 A.M. after performing poolside at the Fontainebleau Miami Beach to celebrate the Liv Golf tournament.

It’s also reported that Travis, who appeared to have heavy days lately due to cheating claims, “kept taking shots of Don Julio 1942 straight from the bottle” and told the crowd, “If there isn’t alcohol in your section, I don’t know what your problem is.”

Earlier this month, Travis’ alleged former fling Rojean claimed that he had cheated on Kylie with her. Though Travis had debunked the claims, Kylie is reportedly “limiting” their time spent together.

More recently, it’s said that Travis and Kylie have listed their first shared residence in Beverly Hills. According to reports, the couple seeks just less than $22 million for the sale. They bought the 9,680-square-foot estate for $13.45 million in 2018.