Kristin Chenoweth, who starred in the original production of ‘Wicked’ on Broadway, made a surprise appearance when the show re-opened after 18 months.

Kristin Chenoweth is celebrating the return of Broadway! The singer, 53, made a surprise appearance at the reopening night of Wicked, following the show’s 18 months hiatus amid the COVID-19 pandemic. “There’s no place like home,” she said in front of a cheering crowd on September 14. Kristin, who rose to fame following her star-making turn as Glinda in the original cast of the show, donned a pair of ruby slippers and a silver mini dress.

She delivered a brief speech before the curtain went up, and exited the stage to a standing ovation. When the opening notes of the first song played, Glinda appeared on stage and quipped, “It’s good to see me, isn’t it?” The performance marked the first since Broadway went dark in March 2020, due to the coronavirus pandemic. However, the Great White Way is now back, with most musicals and plays slated to reopen in the coming weeks.

Fans would recall Kristin last appeared on a Broadway stage in November 2019 for a live concert event. She released her album For The Girls that September, and starred in a show of the same name at the Nederlander Theater. She spoke to HollywoodLife at the time about making her big return. “We’re putting the puzzle pieces together in a different way than I would for a record because it’s not the same,” she said. “A lot of these songs, I’ve never sung live. Meaning live in front of an audience. The night will be entertaining and sometimes you have to take songs that are not on the record. I want people to walk out of the theater and I want them to know me better. And that’s through music.” 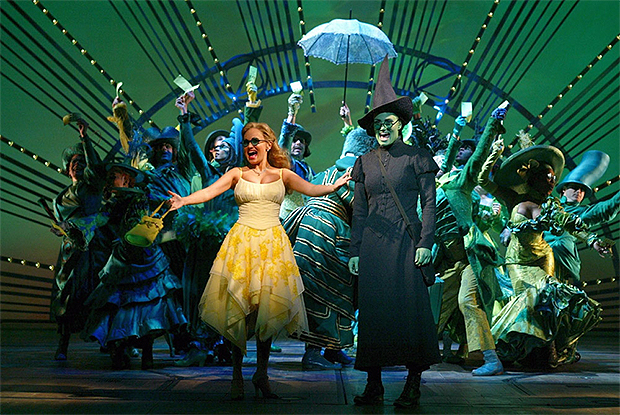 She is also set to star in the new Apple TV+ musical comedy Schmigadoon! “I jumped at the chance to play this role. Barry Sonnenfeld said he was going to allow me to play against type, and I knew what I wanted Mildred to be,” Kristin explained to HollywoodLife in a recent interview. “I needed the ‘Joker’ maniacal lips, I needed that Mildred Pierce hair, I needed the too tight corset, and he let me go for it.”

09/15/2021 Celebrities Comments Off on Kristin Chenoweth Surprises Crowd At Reopening Of Wicked On Broadway: Theres No Place Like Home
Recent Posts