On Tuesday, the Live With Kelly and Ryan co-host shared a picture of herself wearing a white bikini and a sheer cover-up on Instagram, looking amazingly tan while in her enviable beach surroundings. In the flattering shot, Ripa’s blonde hair blows in the wind as she adjusts her cover-up.

In her caption, the 48-year-old mother of three gave photo credit to Lola.

“Sous le soleil avec #papa (Not pictured) 📷: @theyoungestyung,” she wrote, which translates to “under the sun with #papa” in French.

Ripa and family are currently enjoying a tropical getaway, judging by their recent social media posts. Consuelos recently shared a family selfie on his Instagram Stories of him and his wife alongside their oldest son, 22-year-old Michael. 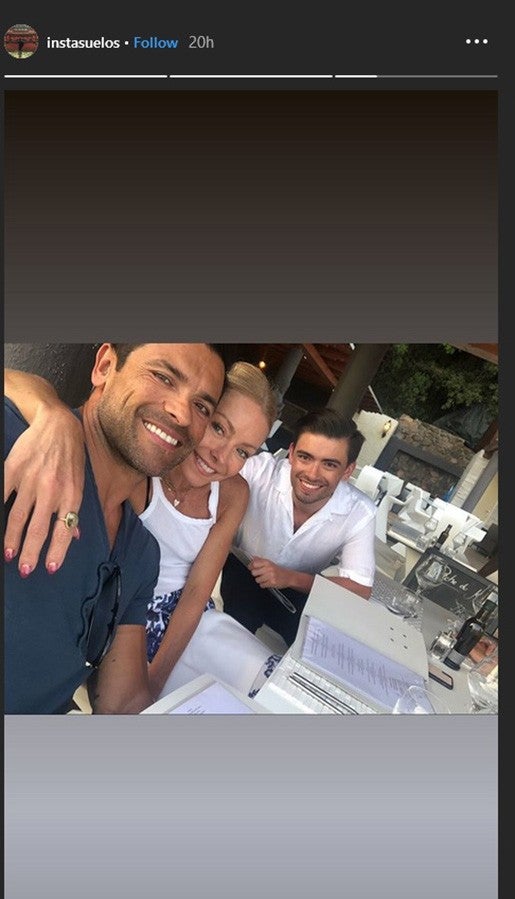 ET recently spoke to Ripa and 48-year-old Consuelos at the TrevorLIVE Gala earlier this month, where they talked about what they’re looking forward to the most when all of their kids move out. Aside from Michael and Lola, the two are also parents to 16-year-old Joaquin.

“I’m truly going to be running through the house naked,” Ripa said. “I just want everybody to know that. I’m going to be sitting on every piece of furniture naked. Be warned before you come over. That’s what I’ll be doing in my spare time.”

UNITED STATES – MAY 14:Mark Consuelos, wife Kelly Ripa and their children (from left) Michael Joseph, Lola Grace and Joaquin Antonio arrive at the Chelsea West Cinemas for a special screening of the movie ‘Shrek the Third.'(Photo by Richard Corkery/NY Daily News Archive via Getty Images)

Kelly Ripa with her daugther Lola Grace and her son Michael Joseph at a party celebrating the opening night of ‘Blue’s Clues Live! Blue’s Birthday Party’ at Radio City Music Hall in New York City.4/26/02Photo by Scott Gries/Getty ImagesUp Next