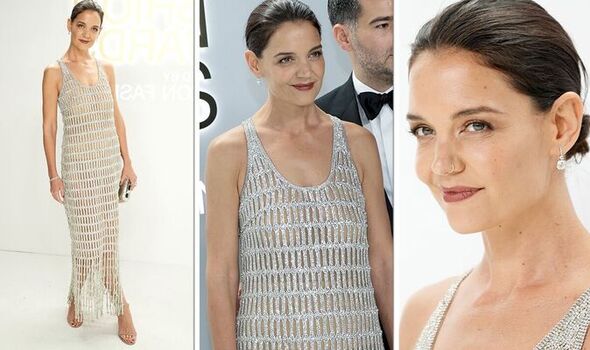 Katie Holmes, 43, appeared in a crowd of celebrities at the CFDA Fashion Awards in New York on Monday evening.

Katie Holmes, 43, appeared in a crowd of celebrities at the CFDA Fashion Awards in New York on Monday evening.

The Dawson’s Creek star is known to dazzle her fans, whether she’s in simple streetwear or dressed to the nines for events.

The design of the dress created an illusion, as it left plenty of skin bare but onlookers questioned what they could see through it as she wore nude-coloured underwear.

Katie ensured the spotlight stayed on her dress as she accentuated her natural beauty with neutral makeup, a simple bun and beige heels.

The celebrity has started some of her own fashion ventures since splitting from her ex-husband Tom Cruise, including the Holmes and Yang clothing line.

The actress’s daring garment was made up of strings of diamonds.

Katie posed next to the designer of the dress

Jonathan Simkhai, 37, joined the actress on the carpet as she modeled his design.

Katie kept the spotlight on her garment

She accessorised with simple diamond earrings, a low slicked-back bun and natural makeup.

The actress made her appearance at the CFDA Fashion Awards

The actress was one of many stars at the event

The industry legend donned a matching red dress and blazer with her signature sunglasses and a chunky silver necklace.