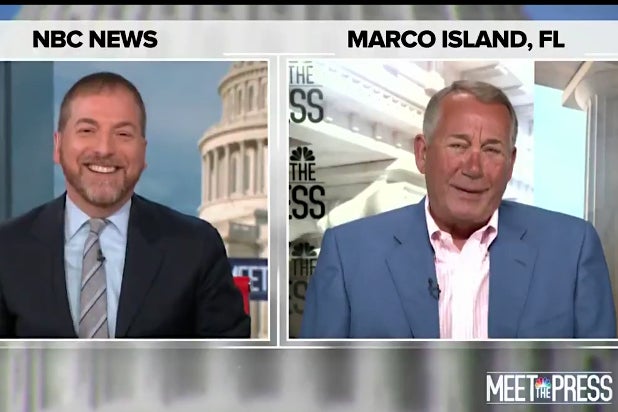 John Boehner’s interview with Chuck Todd on “Meet the Press” Sunday ended with some playful banter – and a curse word or two – when the NBC host asked the former Republican House Speaker whether he would consider running for office again.

Boehner, who has been making the media rounds to promote his new memoir “On the House,” simply said that he would “rather set myself on fire than to run for office again.”

Todd responded by joking that he only asked the question because “I expected an answer just like that,” to which Boehner grinned and told Todd, “You’re a s—. You’re a s—.”

Check it out in the video below.

“I assume I’m getting that as a compliment. I’ll take that as a backhanded compliment,” Todd said with a laugh.

Prior to the light-hearted exchange, Boehner was asked for his thoughts on news this week that a section of Trump-supporting Republicans led by Georgia Rep. Marjorie Taylor Greene were planning on starting the “America First Caucus,” which was reported to be based on “Anglo-Saxon political traditions.” While Greene distanced herself from the caucus, she reaffirmed her support for far-right policies, saying that “America First policies will save this country for all of us, our children, and ultimately the world.”

“I have no idea how this even showed up,” Boehner told Todd. “America is a land of immigration. We’ve been the world’s giant melting pot for 250 years. And we ought to celebrate the fact that we are this giant melting pot. And to see some members of Congress go off and start this America First Caucus is — it’s the silliest thing I’ve ever seen. And Republicans need to denounce it.”