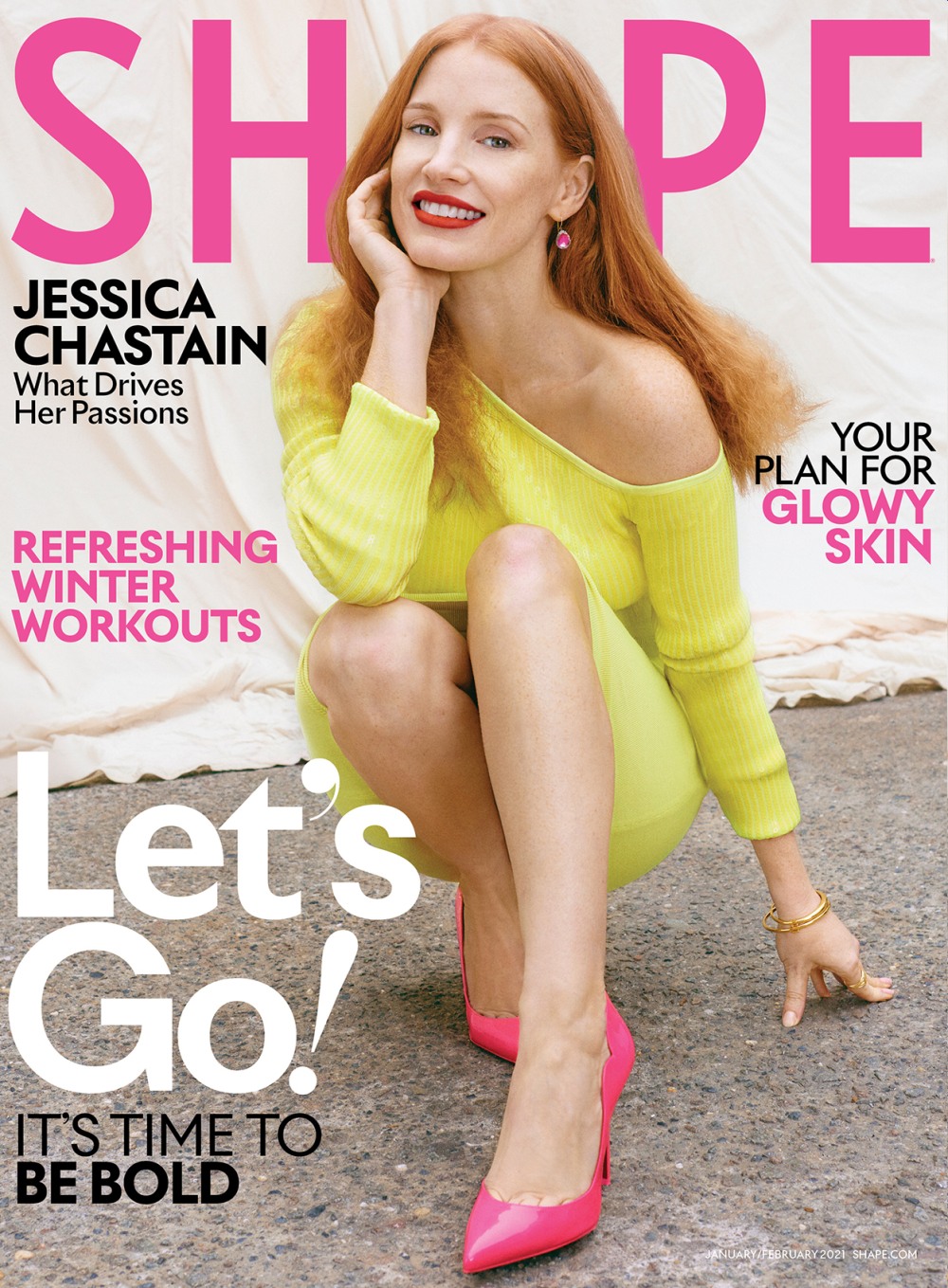 Jessica Chastain covers the January/February cover of Shape to promote the many projects she’s got coming out this year, including The Forgiven, The Eyes of Tammy Faye (where she plays Tammy Faye Bakker) and The 355, the international lady-spy film she put together several years ago. In this interview, she mostly talks about what she’s doing during the pandemic and her career goals – you can read the full piece here. Some highlights:

She spent a lot of quarantine time at home with her family: “It was great because my grandma was with me, and I got to spend time with my family. My mom has been with us a lot too. But I miss my girlfriends so much. I miss going out to dinner, just the girls. I miss getting a cocktail, sharing secrets, and getting advice from everyone. I’ve really been missing that sense of community.”

She did workouts with her grandma: “During quarantine, I did [trainer] Isaac Boots’ Torch’d workouts with my grandmother, who is in her 80s. It was such a breath of sanity during that time to do it every morning with my grandma. And she really helped me be accountable.

She’s a vegan: “I became a vegan about 14 years ago. At the time, I was very low energy, and I remember getting sick. I was making one of my first films, in which I had to play different ages of the character’s life, and I wanted to change my body accordingly. So I would gain weight and then lose it really quickly. After that, my body was wrecked. A friend said, ‘You should try this two-week vegan raw-food diet.’ I hated it. The first week, I was so miserable. But by the second week, I had so much energy. When the two weeks were over, I was like, I’m done! I went to a restaurant and ordered risotto and fish. And that night, I felt sick again. I decided that my body was clearly telling me the way it wanted me to eat. I was raw vegan for about nine months. Now I’m just vegan.

She loves to cook: “I love to cook — so much that I went to the Natural Gourmet Institute in New York in 2012 and took the intensive chef-training program. In the winter I like to make soups and stews and anything roasted. I’m also really into food as medicine. Licorice root tea is my jam during COVID-19, because licorice is really good for your immune system.”

She fasts one day a week: “I don’t want anyone to misinterpret this or do anything that’s unhealthy for them, but it’s really important for me to fast one day a week. I do a green-juice fast every Monday. I like to start my week in a quiet place, listening to what’s going on with my mind. It’s a sense of giving myself a moment to be clear and allowing my body to reset. It helps me start the week.”

Why she chooses to do certain films: “That’s something I’ve thought about in terms of movies I’ve done, like Interstellar, playing the physicist who solves the equation of gravity. Or The Martian, where I was the commander of the mission to Mars. Those images of women in media are incredibly important to me. In the last five years or so, I’ve asked myself, ‘What am I choosing? Am I showing women in a light that is different from what has been shown? How can I move the conversation forward?’ I was doing it in particular for young girls. But it’s important to do it for young boys as well. Because boys and men should be comfortable seeing women in these roles. Otherwise, we’re denying them the realization that the feminine is powerful and strong.”

I think, realistically, I could probably fast for a day or do a juice cleanse for a day, but that day could never be MONDAY. Monday, the start of the work week, when everything feels a little bit “off,” when your computer crashes or there’s some technical problem somewhere or everything just feels slower. No. Mondays are when you need to self-soothe with caffeine, carbs and sugar, whatever gets you through. I could fast on, like, a Wednesday or Thursday though. As for Jessica’s veganism… I couldn’t do it but God bless. I don’t get how two weeks of veganism meant that she was suddenly super-sick when she ate a piece of fish, but vegans always have stories like that.