The face of professional lacrosse is bearded and chiseled, a look tailor-made for drawing fans on Instagram and YouTube. It belongs to Paul Rabil, who has long been considered the kind of athlete who could take his sport into the mainstream.

Now, Rabil finally has that chance — both as a player and co-founder of a new league changing the dynamics of pro lacrosse.

“This is the biggest opportunity our sport has ever had,” he said. “To seize the spotlight and change both the afterlife of college lacrosse players, the pro marketplace for fans and sponsors, and the culture of the game — what it means to be a pro lacrosse player.”

Rabil, 33, once held the points record for Major League Lacrosse, which had been North America’s top outdoor lacrosse league. That was until Rabil and his brother, Mike, started the Premier Lacrosse League, which began play last month with 160 players, including many M.L.L. All-Stars and members of the United States national team. The new league will have its All-Star Game on Sunday in Los Angeles.

Is there demand for such an enterprise? Why would so many players abandon a league two decades old to come along with the Rabils?

The answer is that for most players, professional lacrosse has been a grind, even though they play a rapidly growing sport in front of affluent crowds. Even a star might barely earn $50,000 a year in salary, similar to the average pro football or basketball player in the 1930s or ’40s — when the college version of those sports overshadowed the pro one, much like lacrosse today.

Now Rabil wants to let others enjoy what he has — the chance to make a living just from the sport.

Most of the pros believe in Rabil, who is offering an average $35,000 in salary for the 14-week season, plus benefits and equity stakes, along with a national TV deal. The P.L.L., Rabil said, will have year-round paid opportunities for its players as well, such as in the P.L.L. Academy, which puts on lacrosse clinics, and at smaller exhibitions and tours.

The migration of players from the M.L.L. to the P.L.L. includes 115 former college all-Americans, 12 college player of the year winners and 10 pro most valuable players.

Money has followed Rabil, too, with the P.L.L. securing financial backing from several big investors. League officials declined to say how much has been staked, but the investments are generally based on the expectation of a return in 10 years.

Many investors have lacrosse backgrounds. Joe Tsai, a founder of Alibaba Group and an owner of the Brooklyn Nets, played at Yale. David O’Connor, a former managing partner of Creative Artists Agency, played at Dartmouth.

O’Connor said the Rabil brothers understood trends toward making sports leagues more player-friendly. “It’s bringing the sport to the right markets with the finest players and event-izing the experience — and it’s proving the model with a great media partnership and top-tier sponsors like Adidas,” he said. “It’s about the very best talent in the game competing at the highest levels, as the game was meant to be played.” 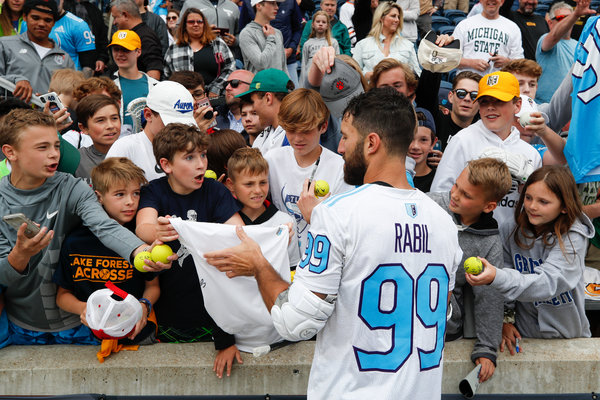 The 6-foot-3, 220-pound Rabil has done more on the field than perhaps any other player of his generation: in college, a two-time national champion and four-time all-American at Johns Hopkins; in the M.L.L. and the indoor National Lacrosse League, a three-time champion, two-time M.V.P. and 12-time All-Star; internationally, a World Lacrosse Championship winner and M.V.P.

Rabil’s business career began more modestly. After graduating in 2008, he lived in his parents’ Maryland basement and analyzed commercial real estate four days a week; he trained before work and played over long weekends. He later started a camp and clinic business, using a small endorsement from Under Armour. He was becoming something rare: a full-time lacrosse player.

Rabil dived into social media before most athletes realized its potential, using Facebook’s athlete and business pages to connect to a rabid fan base. A successful YouTube channel followed, and he soon had more than 700,000 followers across all platforms. Major sponsors signed him, and Rabil soon became the first in his sport to earn more than $1 million annually.

He also pursued other business dealings with his brother Mike, who played football at Dartmouth. They formed an investment company in 2013 that was eventually bought out by the British lender Funding Circle, sending Mike to Silicon Valley while Paul stayed in New York as a star of the M.L.L.’s Lizards.

The Rabils revisited lacrosse as a potential project, as the sport tailed off professionally even as it boomed at the amateur levels.

“There were these other non-big-four sports at the time that were leveraging new technology and new media and getting behind their athletes, and those games were exploding,” Paul Rabil said. “So we began to ask ourselves the question: Why not lacrosse? Why not us?”

The brothers explored ownership with the M.L.L., but the negotiations broke off. So they decided if they were going to chase their vision, they needed to start anew.

Their new league’s first priority was to let players devote themselves to lacrosse full time. The P.L.L. would provide full-time wages, health insurance and equity in the league, none of which were offered by the M.L.L. Rabil wanted players to do their own branding, just as he had for himself. The P.L.L. would give players access to their photo and video highlights, ready to be uploaded to their social media profiles.

The Rabils secured a multiyear deal with NBC Sports for live broadcasts of every game through one of its platforms, with the media company paying for production. The Rabils want to attract new fans to lacrosse in a way that has worked for mixed martial arts, with a documentary series to teach viewers about the sport.

Like golf and tennis, the P.L.L. has a touring model designed to spread the sport’s exposure as widely as possible, with six teams hitting 12 cities over summer weekends, with the league playing a total of three games each weekend. The festivities include instructional clinics, player interaction, contests and other offerings. The events evoke the energy of lacrosse’s marquee event: the N.C.A.A. tournament’s semifinals weekend, which attracts up to 90,000 fans every year.

The P.L.L. drew about 11,000 fans a weekend in June, its first month, peaking with about 16,000 on the weekend in Baltimore, a lacrosse hotbed. About 400,000 fans viewed a Sunday game at Red Bull Arena in Harrison, N.J., over three NBC platforms.

“Our fans care deeply about the sport and the stars,” Paul Rabil said. “They support world-class lacrosse and will follow their favorite players and teams, no matter if the game is home, away, or at a neutral site.”

It’s this last piece of the equation that draws skepticism. Brendan Kelly, owner of the M.L.L.’s Chesapeake Bayhawks, has his doubts about the tour.

“Team sports require community support,” Kelly said. “And I don’t know how you build a community around a tour.”

The M.L.L. has been left to fight for its survival. It has bought back its media rights, raised player salaries and folded three franchises, leaving both leagues with six teams. Kelly said he believes his league will survive and could one day merge with the P.L.L. Rabil said he believes his will offer a better experience for both fans and players.

“If you can distill pro sports down into must-haves, you need to recruit and invest in the best players in the world, a major network distribution deal and a first-class fan experience,” Rabil said. “Pro lacrosse has never been positioned to capitalize on all three of these, until now. We’re a sports league and a media company.”

“I am also aware of at least two P.L.L. franchise owners waiting in the wings,” said Cacciato, director of Ohio University’s master’s program in sports administration.

The P.L.L. will cap its season on Sept. 21 in suburban Philadelphia, when it will crown a champion and declare a most valuable player with an award named for Jim Brown, a Hall of Fame football and lacrosse player who was an all-American at Syracuse in lacrosse.

Perhaps, by then, the future of the pro sport will come into focus.

An earlier version of this article misidentified the points leader for Major League Lacrosse. As of June 8, it is John Grant Jr., not Paul Rabil.

An earlier version of this article included an outdated job description for David O’Connor. O’Connor is a former managing partner of Creative Artists Agency who left in 2015, not a current managing partner at the firm.

07/19/2019 Celebrities Comments Off on Is This Pro Lacrosse’s Moment? This Star Is Betting Everything on It
Recent Posts