Prince Harry and Meghan Markle’s shocking exit in 2020 pales in the comparison to another scandal that continues to loom over the British royal family: Prince Andrew’s connection to convicted sex offender Jeffrey Epstein. In 2019, the Duke of York was accused of having sex with a 17-year-old girl named Virginia Roberts Giuffre “who had been supplied to him by his friend,” according to The New York Times. He has since denied the allegation in an interview with BBC.

At the time, he announced his decision to step back from his royal duties because of all the negative press affecting his family. “It has become clear to me over the past few days that my association with Jeffrey Epstein has become a major disruption to my family’s work and the valuable work going on in the many organizations and charities that I am proud to support,” Prince Andrew wrote in a statement issued by Buckingham Palace. “Therefore, I have asked Her Majesty if I can step back from public duties for the foreseeable future, and she has given her permission.” Prince Andrew said he would be ready to help “any appropriate law enforcement agency with their investigation, if required.”

Despite his attempt to save face, the duke’s scandal threatens the monarchy’s future as his accuser sued him in August for his alleged participation in Epstein’s sex-trafficking ring, per The Guardian. Scroll ahead to see how Prince Andrew will reportedly attempt to dodge the law. 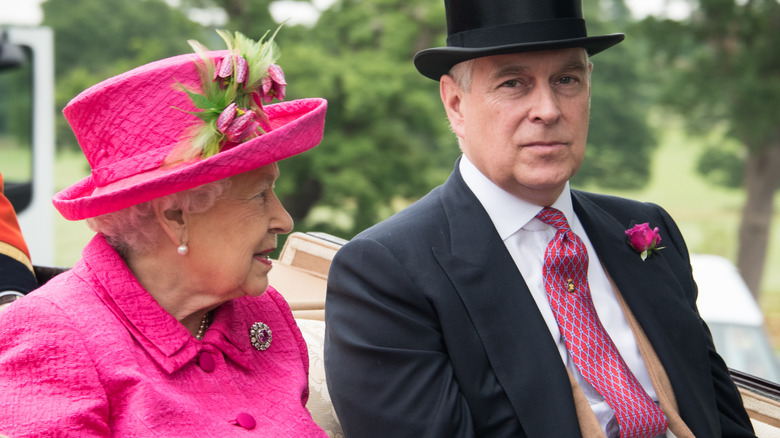 Hours after Prince Andrew was sued, he reportedly fled to Queen Elizabeth II’s Balmoral Castle in the Scottish highlands and has been hiding out there since. The Sun published pictures of him and his ex-wife, Sarah Ferguson, making the 500-mile trek from the Royal Lodge in Windsor to Scotland where the queen was on holiday. According to sources, the Duke of York has been “going stir-crazy inside Royal Lodge for the past few weeks” because he was afraid of being served and decided to go stay with his mother, which outlets including the Mirror and the  Daily Beast have presumed is his way of avoiding legal ramifications.

Though the Mirror reporter Daniel Bird notes that Prince Andrew has “no immunity under royal privilege,” the queen does, so Andrew likely believes he is at least somewhat shielded from consequence up in Scotland with her. It’s unclear if his mother will be able to protect him, but his accuser’s lawyer has made it clear the prince “cannot hide behind wealth and power and palace walls.”

09/14/2021 Celebrities Comments Off on Is Prince Andrew Really Hiding Behind The Queen To Avoid Legal Ramifications?
Recent Posts