I’m A Celebrity 2022: ‘Fortunately we have managed to keep their identities a complete secret’: Ant and Dec poke fun at Matt Hancock’s highly publicised jungle arrival as the series returns to Australia for the first time in three years

Ant McPartlin and Declan Donnelly confirmed there will be two extra arrivals to the I’m A Celebrity camp and poked fun at Tory MP Matt Hancock, expected to be one of them, as the show launched on Sunday night.

Former Secretary of State for Health and Social Care Matt was seen arriving in Australia earlier this week after it emerged he was going to make a controversial appearance on the show. 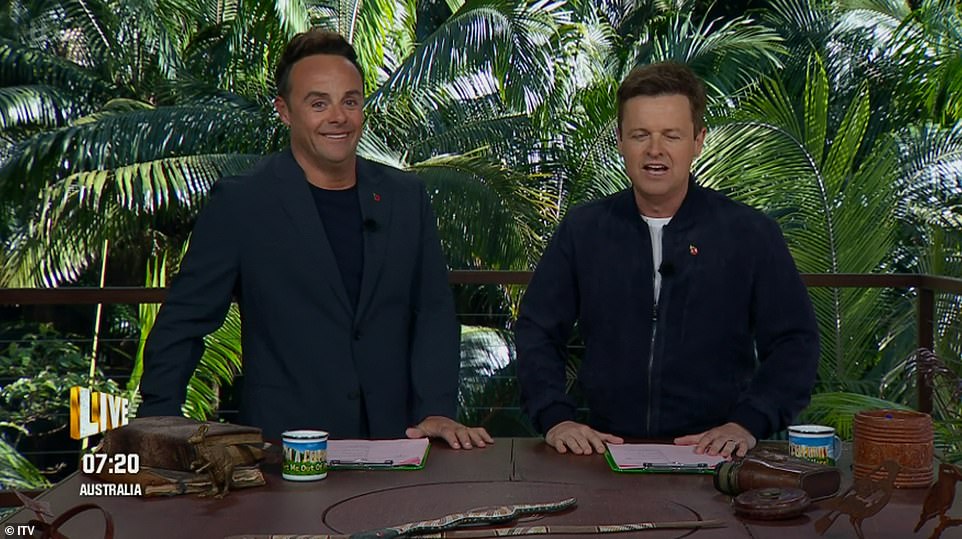 Jokers: Ant McPartlin and Declan Donnelly confirmed there will be two extra arrivals to the I’m A Celebrity camp and poked fun at Tory MP Matt Hancock, expected to be one of them, as the show launched on Sunday night

On Sunday, Chris Moyles was the first star to arrive in a luxurious black Rolls Royce. The star admitted he was hoping to endear himself to the public, saying: ‘People are going to be so pleased to see Chris Moyles.

Following on from Chris was former Love Island star Olivia Attwood. She said: ‘I do think that with reality TV people in general there is an idea that we’re lacking in the brains department and I’m going to confirm that.’ 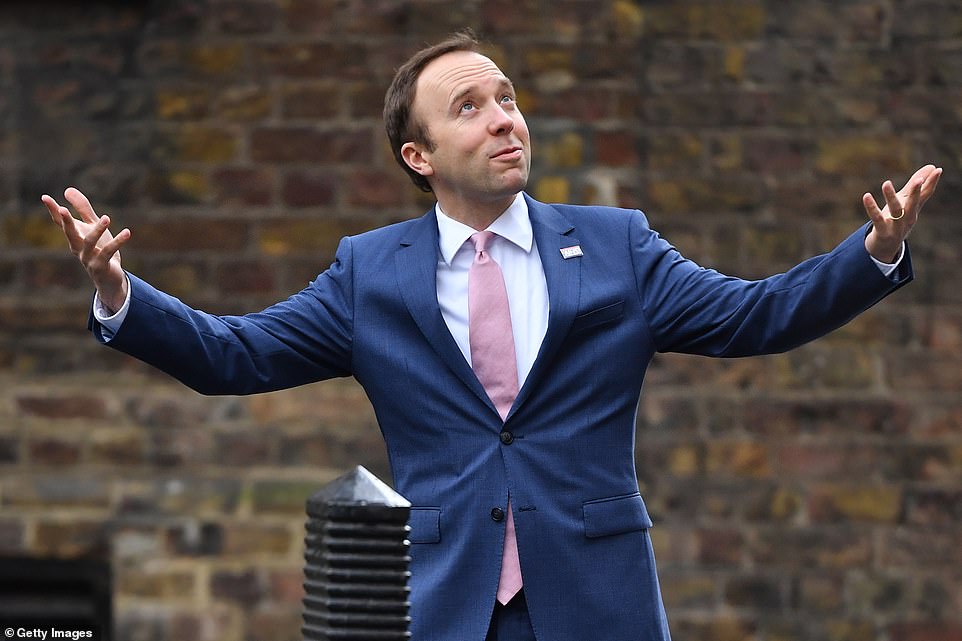 Of the show’s tough trials, she said: ‘My nerves are not actually trial-based. They’re more actually living with other people but I got used to that on Love Island… I think the shower and toilet stuff doesn’t actually phase me! I pee in the garden every time I go out.’

Charlene White was the third star to make appearance on the show. The ITV newsreader and Loose Women anchor said: ‘Of all the shows I said I was never going to do, I’m A Celeb was definitely one of those…

‘How do I think I’m going to cope? I’m not an outdoorsy person.’ 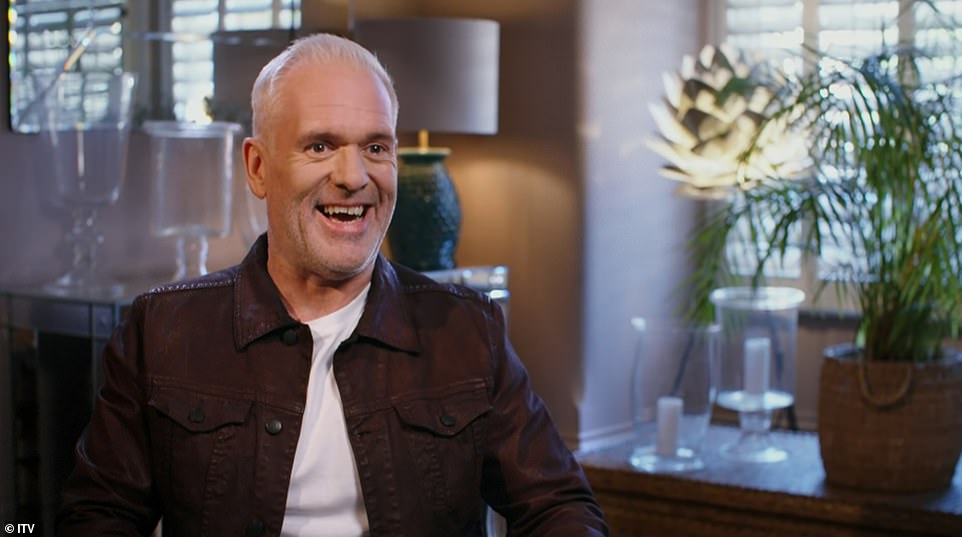 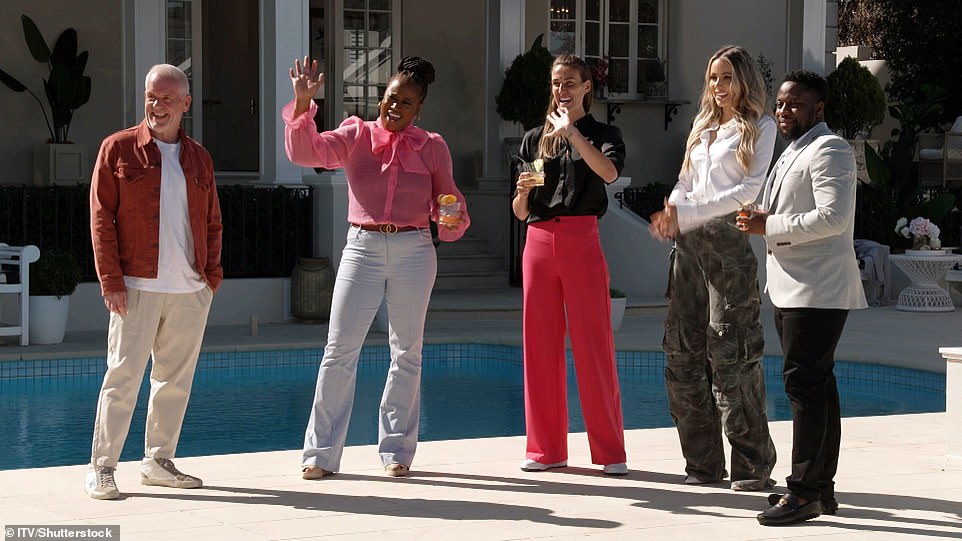 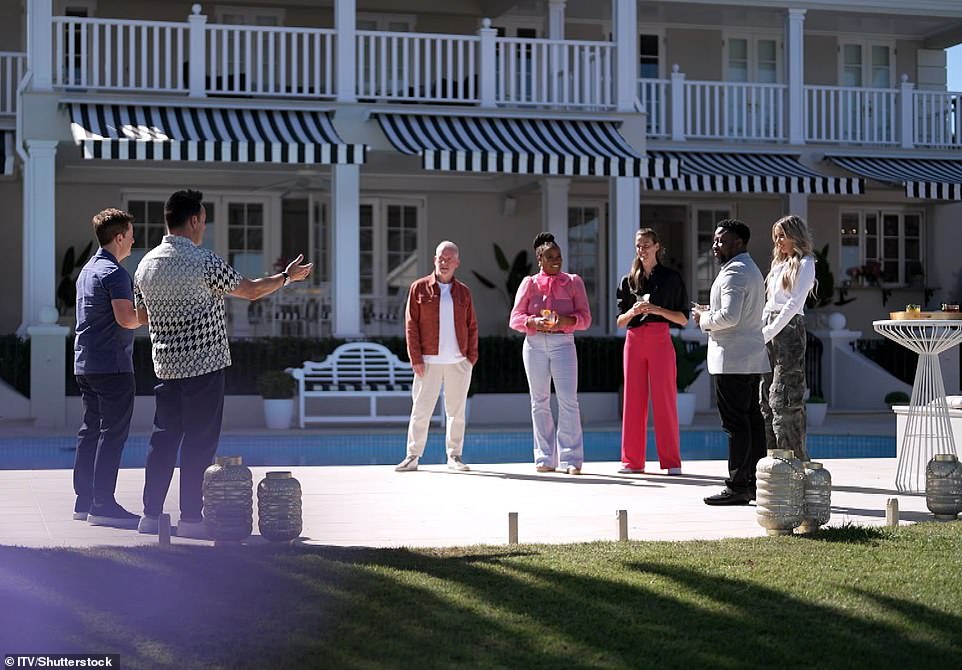 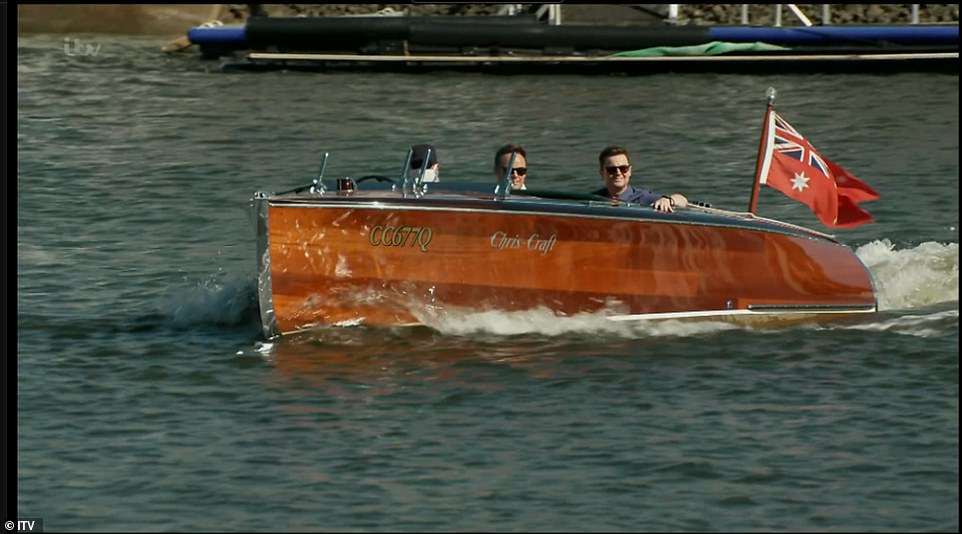 Charlene has previously said she would not be able to resist crying on the show as she struggles to cope with the tough jungle living conditions.

The fourth celebrity to appear on screens was former England footballer Jill Scott. The Lionesses star said on entry: ‘My biggest achievement was winning the Euros against Germany. 90,000 people at Wembley. The best day of my life. My next step is entering the jungle which I’m very excited about.

Comedian actor Babatunde Aleshe was the fifth star to enter, meeting the rest of the celebrities at a lavish villa: ‘I definitely don’t like rats. I had a hamster once and I was really scared of it.’ 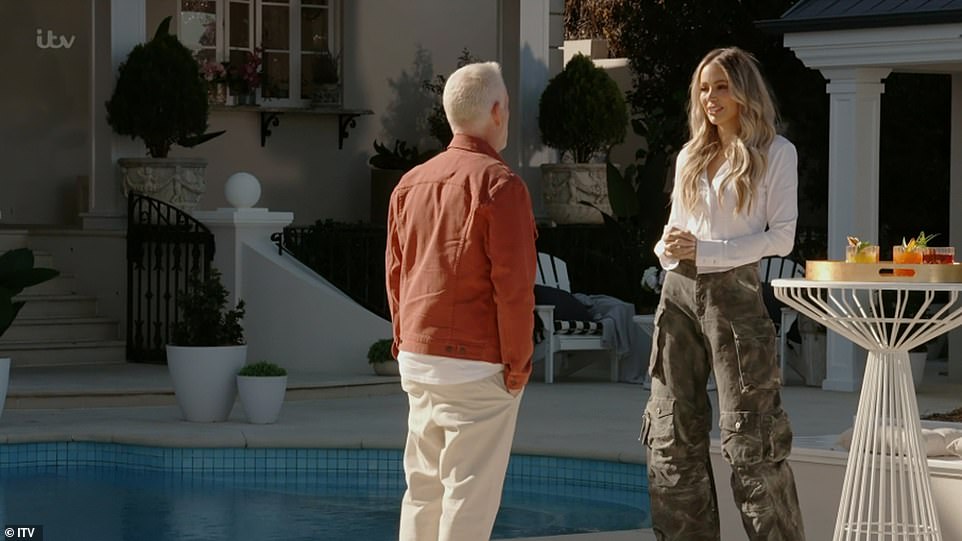 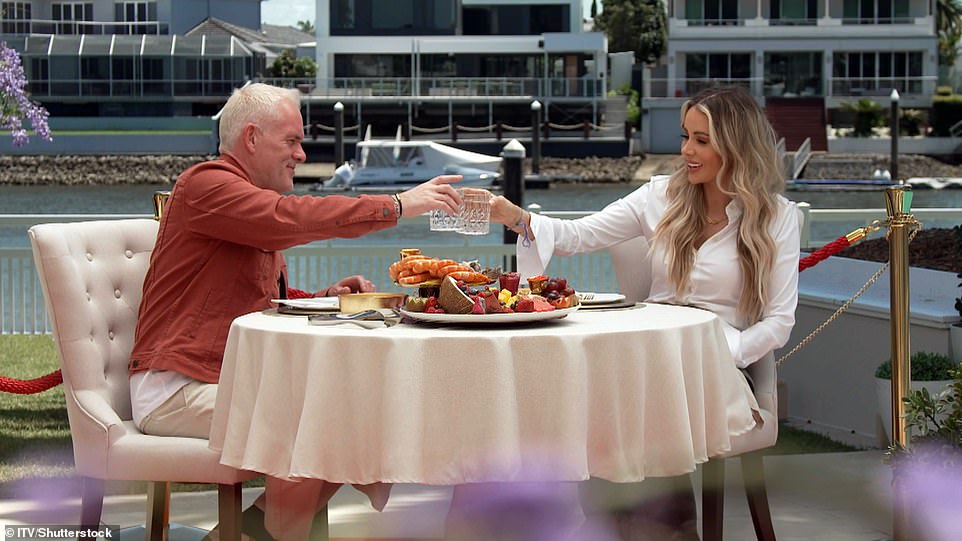 ‘Can I camp? No! I’m not that crazy. Do I have survival skills? Yes! I’m from Tottenham. We run.

‘I’m scared of everything. Rats, spiders, snakes and at the top of that is frogs… Have you ever seen a toad?! Toads are huge! This is Australia, man. They’ve got animals that they ain’t even discovered yet.’

The group was greeted by hosts Ant McPartlin and Declan Donnelly who expressed their excitement at being back in Australia after two years, after it was held in Wales due to the coronavirus pandemic. 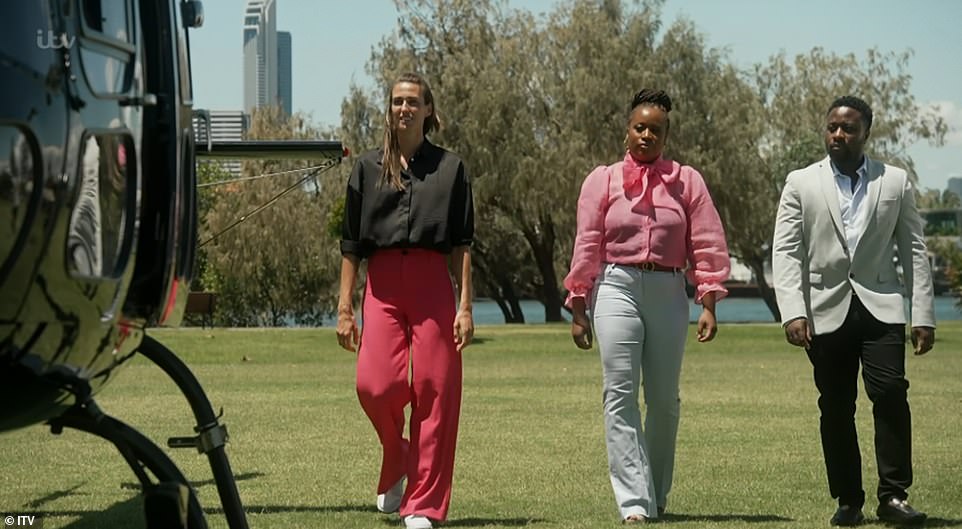 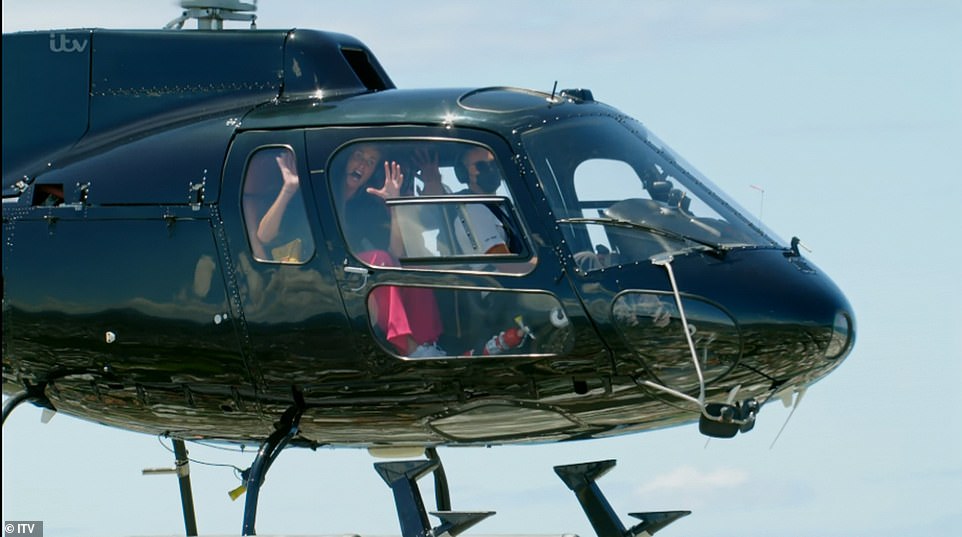 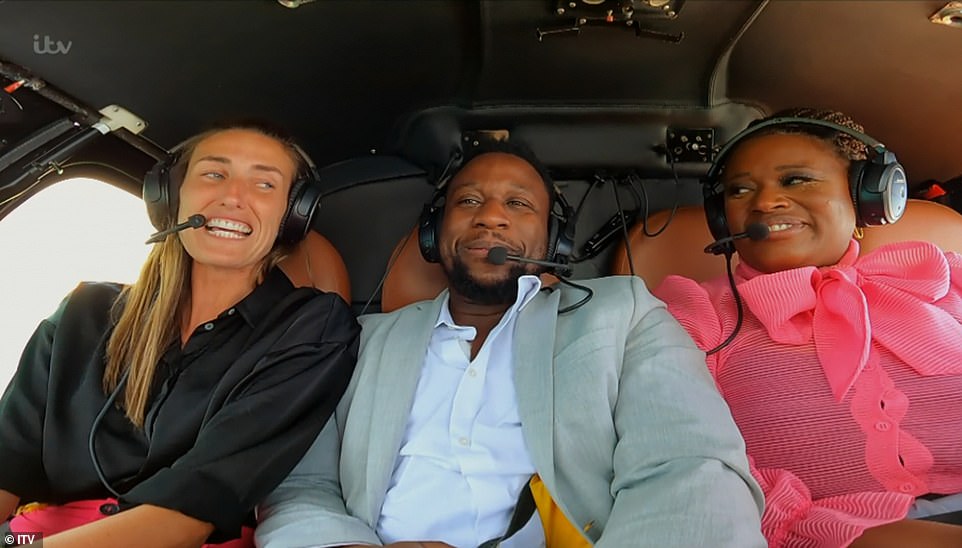 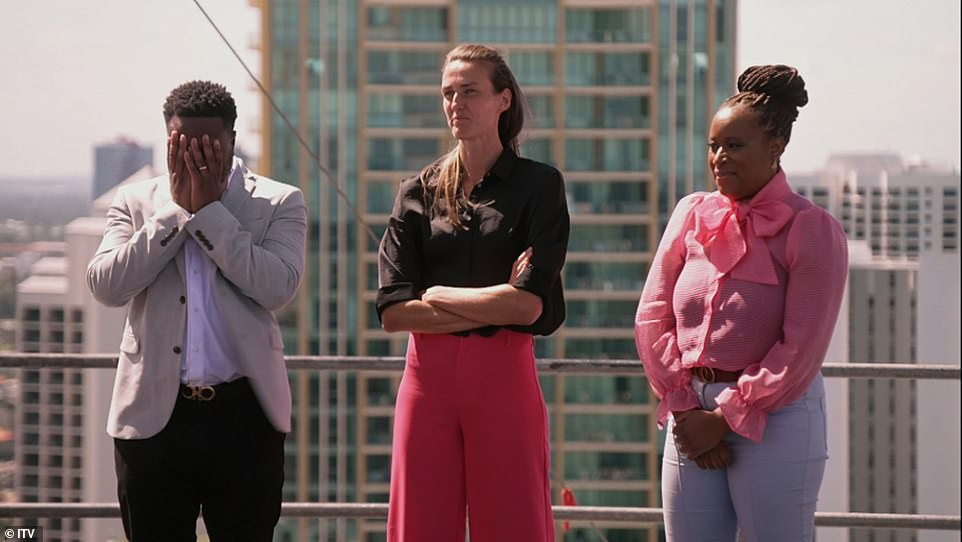 The duo explained the stars would not be heading into the jungle together, with one of the stars being named a Jungle VIP – Olivia was voted for the role by the public.

She was able to choose one of her fellow contestants to join her for a VIP meal at the villa, with Olivia choosing radio DJ Chris.

The rest of the group were told they would be leaving the villa and that they would have to earn their food on their way to their camp. 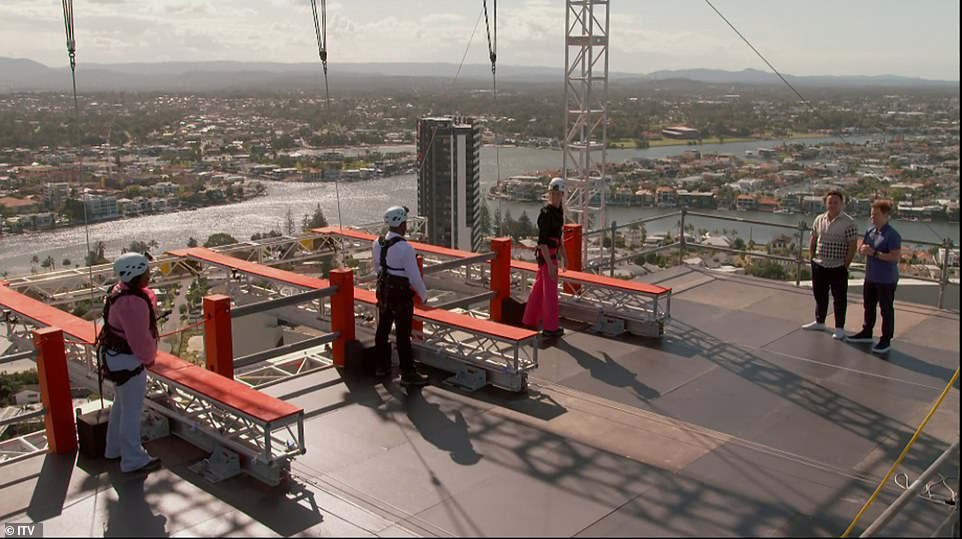 Chris said: ‘I think VIP realistically means we get to have a plate of fruit and then we get to do something that scares the living s**t out of me.’

Olivia told Chris on why she chose him as her VIP: ‘I know you’ve got a good sense of humour and we’re obviously going to spend some time together so we can have a laugh.’ 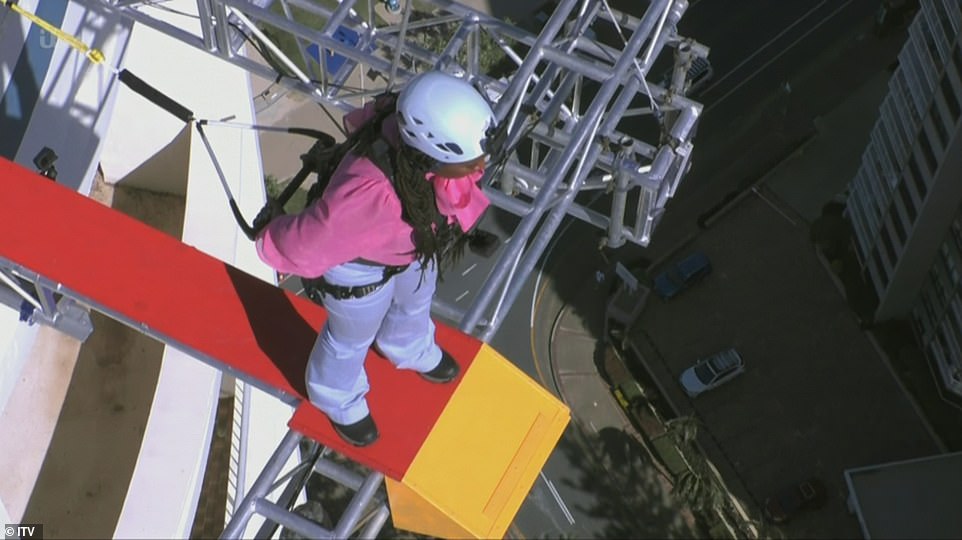 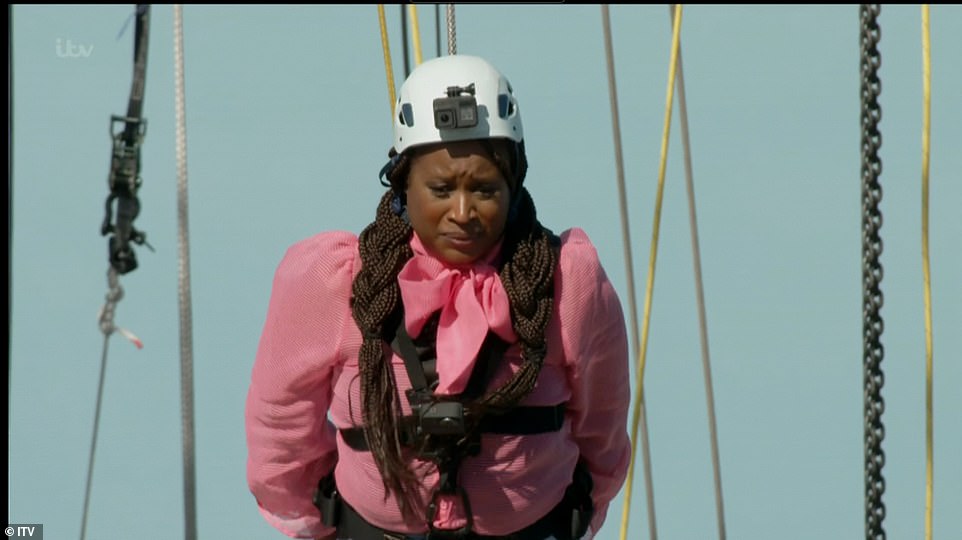 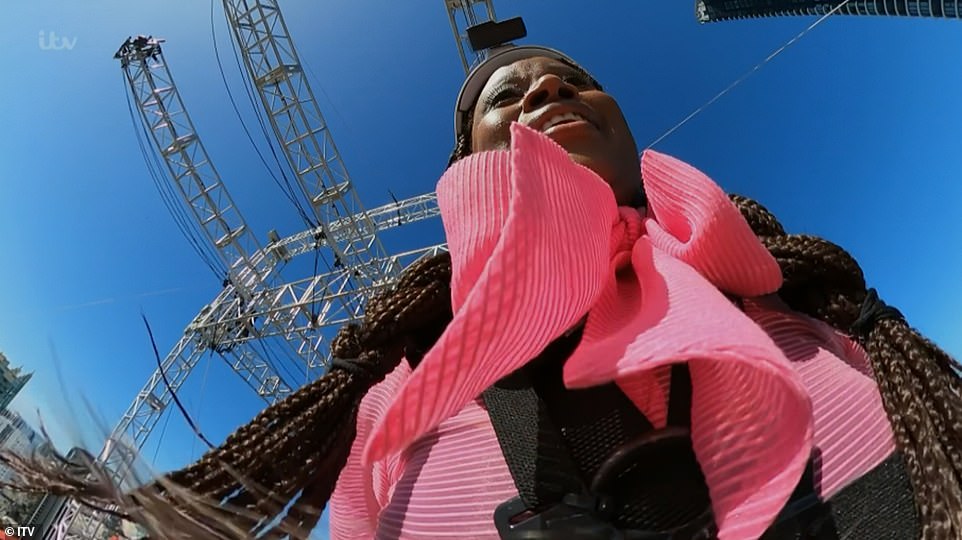 Jill, Babtunde and Charlene were then seen lifting off in a helicopter and flying over the Pacific Ocean towards a 32-storey tall tower block to take part in the infamous ‘Walk The Plank’ challenge.

They were told there were three stars for collection which they could exchange for meals and they needed to walk to the end of the plank, let go of the rope securing them and they would win their meals for camp.

While Charlene quickly made her way out to the end of the plank, which was swiftly removed so she could not turn back, Babatunde had to fight his instincts to convince himself to take tiny steps forward.

The comedian was unable to walk to the end and called ‘I’m A Celebrity… Get Me Out of Here!’ and walked backwards to the roof of the building to return to safety.

Jill was able to quickly complete the task, marching towards the end of the plank without a second guess.

Both Charlene and Jill were then tasked with standing on a slant at the end of the plank and leaning forward to look over the edge while holding on to a wire behind them.

To complete the task both Jill and Charlene had to let go of the rope and launch themselves off the end of the plank where they were left suspended in mid air on a wire.

After enjoying their lavish meal together at the villa, Olivia and Chris were seen making their way to the helicopter to complete a skydive over the water off the coast of the city of Surfers Paradise, Queensland and onto a sandy beach.

After jumping out of the aircraft from 10,000 feet, and screaming all the way down, Olivia excitedly declared: ‘That was the most incredible experience of my life! I’m crying!’

With Olivia’s VIP pal Chris having landed safely on the beach, only for the pair to have no clue where they were, the next five celebrities were welcomed onto the show.

Singer Boy George was heard saying he’s perfect for the show because he’s a ‘natural born show off’ before he was joined by Coronation Street actress Sue Cleaver.

Hollyoaks star Owen Warner was then seen arriving by boat after saying his worst jungle nightmare would be encountering snakes.

A Place In The Sun presenter Scarlette Douglas then made an entrance, saying she will bring her excellent cooking skills to the jungle camp to contribute.

The final of the second lot of five celebrities to arrive was former rugby player Mike Tindall, who advised his fellow contenders ‘not to choose fear’ when taking part in the gruelling jungle tasks.

George was chosen as the VIP for this group, with the performer opting for Scarlette to join him for a meal on a luxury yacht.