I’m A Celebrity fans tuning into Tuesday’s show have branded Babatunde Aleshe’s bushtucker trail ‘unfair’ as it took place in the pouring rain.

The comedian, 36, was voted to take part in the first solo trial of the series, Horrifying Heights, after he dramatically was forced to forfeit a terrifying walk-the-plank challenge on his first day.

However, while viewers hit out at producers for not waiting ‘to see if the rain passed’, Babatunde conquered his fears and managed to bag an impressive nine meals for camp. 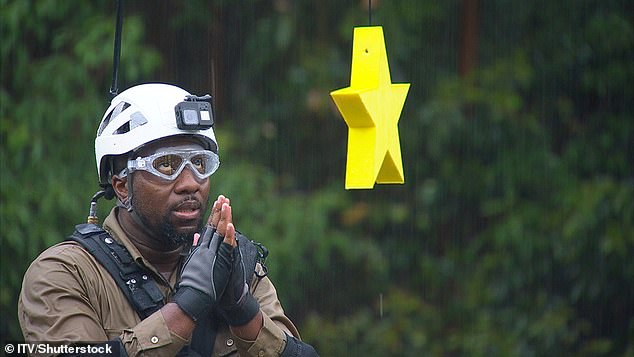 The challenge saw the Celebrity Gogglebox star harnessed to two suspended rings in the pouring rain, where he had to rummage through critter-filled boxes to bag stars.

But luck wasn’t on his side as the heavens opened up, leaving him crawling on his hands and knees as he balanced on the now slippery surface.

And while Babatunde powered through the challenge with much encouragement from Ant and Dec, fans were not impressed that he had to do the trial in such wet conditions. 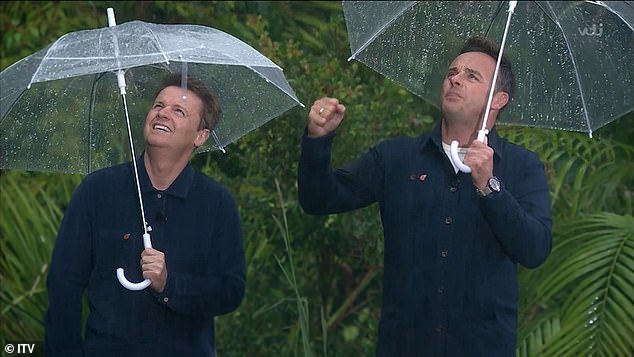 You can stand under my umbrella: Ant and Dec sought shelter as they watched Babatunde take part in the wet trial

Taking to Twitter, one viewer shared: ‘Babatunde should 100% get more time for this rain, it’s so unfair.’

While a second tweeted: ‘Should of gave him more time unfair with the rain.’

‘Could have waited to see if rain passed, feels a bit unfair as rain won’t have been factored in’ commented a third. 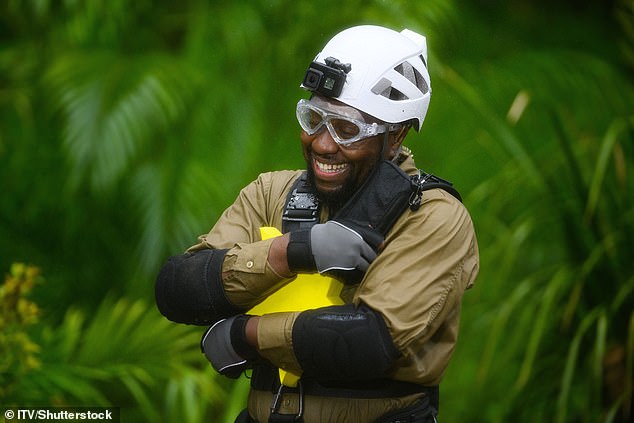 Yes! However, while viewers hit out at producers for not waiting ‘to see if the rain passed’, Babatunde conquered his fears and managed to bag an impressive nine meals for camp

With another adding:  This trial seems so unfair.’

Meanwhile, following Babtunde’s triumph at overcoming his fear of heights, fans also declared him their winner as they gushed over proud they were of him.

One tweeted: ‘Babatunde for the win already! Not only did he conquer his fear he is clearly a genuine and sweet guy. When he was beaming with pride at the end it made my heart melt!!!! Well done dude!’ 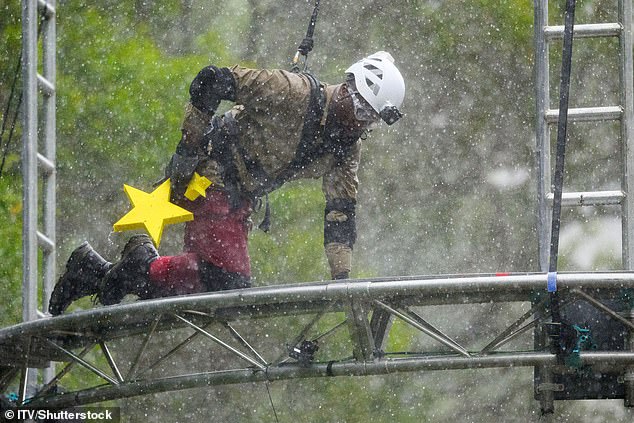 Tricky: The challenge saw the Celebrity Gogglebox star harnessed to two suspended rings in the pouring rain, where he had to rummage through critter-filled boxes to bag stars 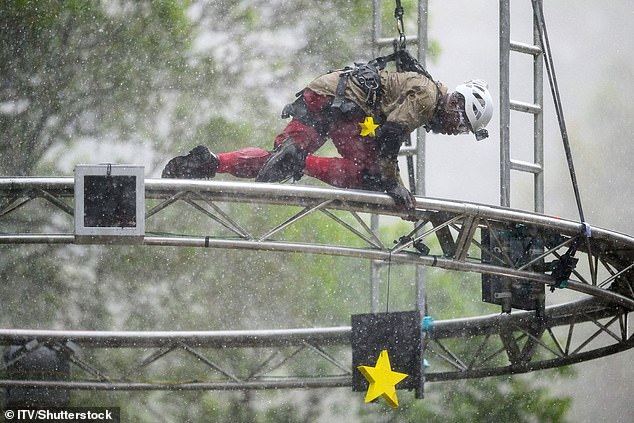 Be careful! But luck wasn’t on his side as the heavens opened up, leaving him crawling on his hands and knees as he balanced on the now slippery surface

While a second viewer shared: ‘Babatunde to win.’

‘So buzzed for babatunde doing that trial and getting 9 stars!’ enthused a third.

With another adding: ‘Babatunde to win man love the guy!!!’ 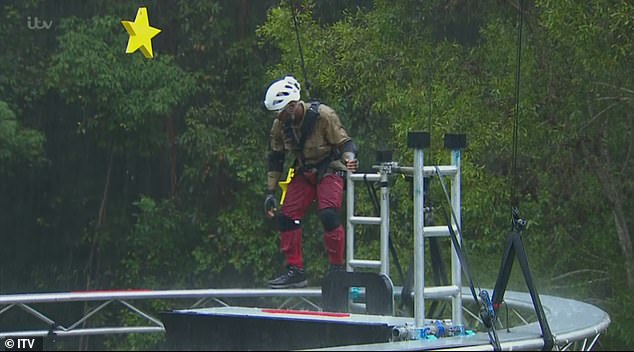 You can do it: The comedian conquered his fears in the difficult conditions 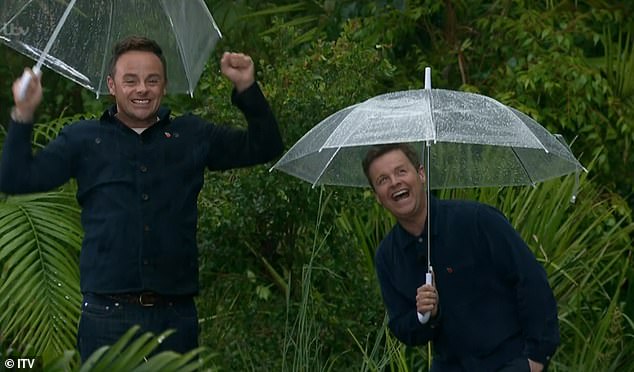 Cheerleaders: Ant and Dec delighted cheered on the star

The downcast contestant replied: ‘Yeah it does.

Dec continued: ‘You’ve got 10 minutes to collect 9 stars. The very best of luck, here we go. 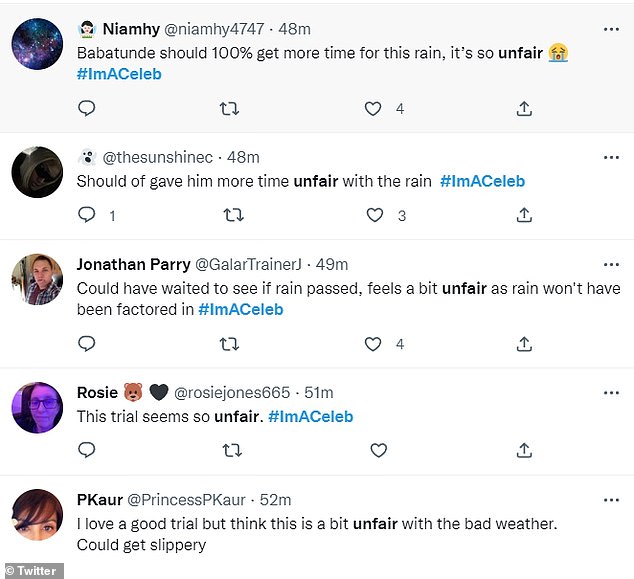 Not impressed: while Babatunde powered through the challenge with much encouragement from Ant and Dec, fans were not impressed that he had to do the trial in such wet conditions

Ant McPartlin then joked ‘Already that’s further than he walked on the plank on the tower, so it’s progress pal, it’s absolutely doable, this.

‘So, you’ve probably noticed it’s started to spin as well… could it be any harder?’

The TV personality discovered he had been voted for by the public to take on Horrifying Heights at the end of Monday night’s show.

Ant and Dec entered the camp to reveal the news and said: ‘You’ve guessed it, Babatúndé. We’ll see you at the trail area very soon.’ 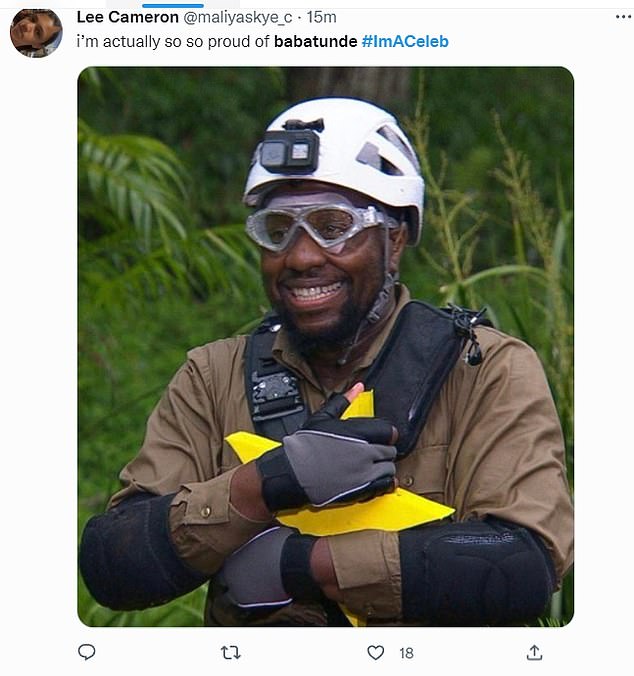 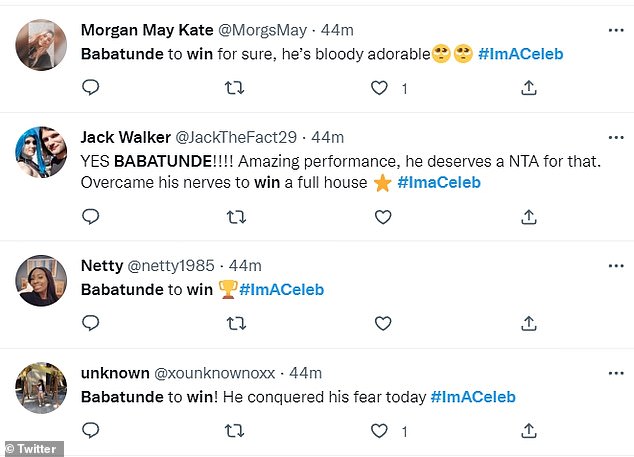 Winner? Meanwhile, following Babtunde’s triumph at overcoming his fear of heights, fans also declared him their winner as they gushed over proud they were of him

His fellow campmates were quick to give him support as they were seen hugging him while he claimed: ‘I’ve got this, I’ve got this’

The hit ITV show kicked off on Sunday and viewers have already witnessed a star yell out I’m A Celebrity … Get Me Out of Here! forfeiting a challenge and star for camp.

During the launch show, the ten celebrities began their journey with three terrifying challenges – as Babatúndé fell at the first hurdle, breaking down in tears during a heights challenge, dubbed The Ledge. 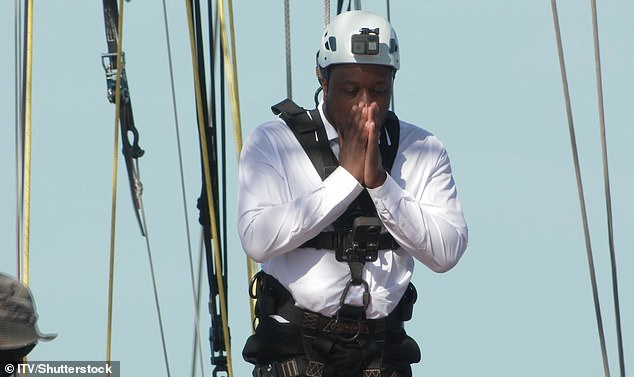 Get me out of here! During the launch show, the ten celebrities began their journey with three terrifying challenges – as Babatúndé fell at the first hurdle, breaking down in tears during a heights challenge, dubbed The Ledge

Admitting he ‘wasn’t determined’ to face his fear as he took on The Ledge at the towering Focus building, the funnyman was the first of his campmates to yell the famous ‘I’m A Celebrity…Get Me Out Of Here!’

Babatúndé was joined by Loose Women’s Charlene White and retired England Lioness Jill Scott to attempt to win stars for camp by walking the plank.

I’m A Celebrity will air every night of the week and both weekend nights after the launch – all at 9pm.