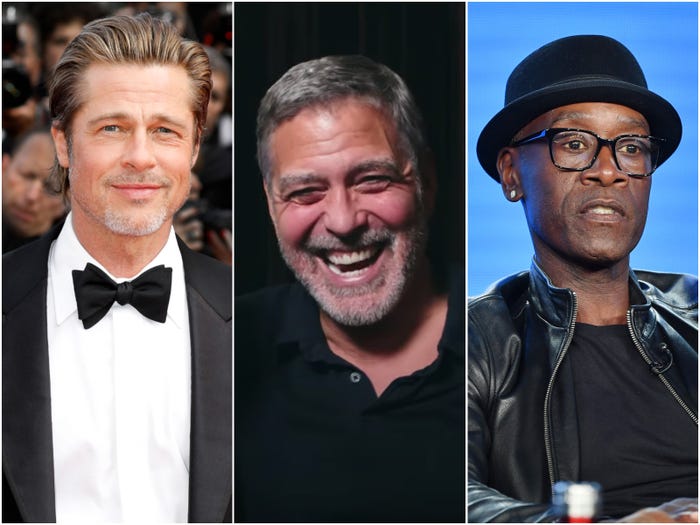 George Clooney once bet his "Ocean's 12" costars Brad Pitt and Don Cheadle $10,000 to stay in a haunted house in Lake Como overnight, but they couldn't do it.

Clooney recalled the story during a video with GQ in which he revisited his most iconic movie roles, including the "Ocean's" movies, the second of which they shot parts of in Lake Como, Italy.

"We were all staying at my house in Lake Como, and there was a house across the lake. It was empty. There was an Italian book about it and we'd made up a story about how haunted it was," Clooney said.

Clooney, who played the titular Danny Ocean in the movie series, told GQ that his Italian friend Giovanni pretended to read a story about a man who used to kill people in the now-abandoned house and then throw them into the lake. Clooney and Giovanni managed to talk everybody into "how dangerous this house was."

The Oscar-nominated actor then went on a late-night trip with three of his costars: Pitt, Cheadle, and Matt Damon, all of whom reprised their roles from "Ocean's 11."

"At 3 in the morning, we get a ladder and we put it on this pontoon boat and Matt and Don and Brad and I took the boat across the water, took the ladder up and climbed in the house. The first thing we saw was this statue of a snake eating a woman's head."

Clooney continued: "We came down to the conclusion: we give $10,000 to any guy who could spend a night in the haunted house with just a candle and a bottle of wine. You got a candle, you got six matches, and you got a bottle of wine."

It was Pitt and Cheadle who ended up taking the bet and staying in the supposedly haunted house, while Clooney and Damon went back to the boat and drove out to the middle of the lake to see how long their costars could last.

"We're sitting in the boat in the middle of the lake. And we have to see the candle go by every window. It goes by like two or three windows and then we get a call and they're like 'f— that, get us out of this house!' And we came back and pulled them out."

Clooney, Pitt, Cheadle, and Damon all starred in all three "Ocean's" movies together, while they have all continued to work together in some capacity ever since. Clooney summarized his fun time making the "Ocean's" movie: "There was a lot of idiocy that went on along the way."

Watch the full video below:

Source: Read Full Article
11/18/2020 Celebrities Comments Off on George Clooney bet Brad Pitt and Don Cheadle $10,000 to spend the night in a haunted house on Lake Como, but they couldn’t do it
Recent Posts
We and our partners use cookies on this site to improve our service, perform analytics, personalize advertising, measure advertising performance, and remember website preferences.Ok