CHRISTOPHER STEVENS reviews last night’s TV: Even David Attenborough has never had to fend off a frisky female sloth!

Spy In The Wild

Bet you didn’t know gorillas can sing. It makes sense when you think about it — they’ve got chests like beer barrels. With a little training, they could probably manage opera.

But their musical talents had been a secret, until the hidden cameras of Spy In The Wild (BBC1) were deployed. Caught off-guard by a woolly doll with a zoom lens in one eye, a mountain gorilla troupe in Uganda warbled and hummed as they tucked into a breakfast of leaves plucked fresh from the forest. 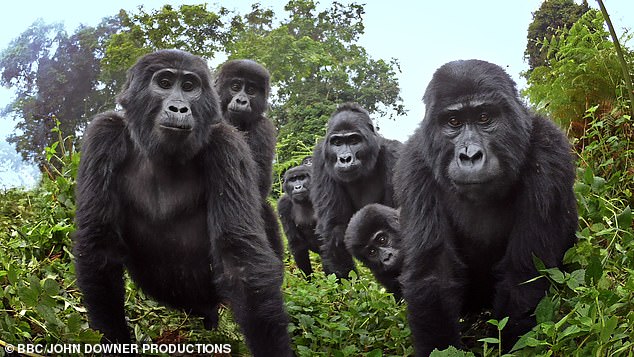 A Mountain gorilla family looks towards the camera. Caught off-guard by a woolly doll with a zoom lens in one eye, a mountain gorilla troupe in Uganda warbled and hummed

There was no mistaking the meaning of their chorused harmonies. These were happy animals, completely relaxed. We’ve seen them looking at ease before, most notably in that famous Life On Earth sequence with David Attenborough from 1979.

But they were on best behaviour that day, warily polite because they had a guest. Now, watched only by an imitation baby gorilla, they were completely without inhibitions.

When these spy cameras work, they have the advantage of being completely unobtrusive.

Pioneer film-maker John Downer and his team originally developed the concept to get closer to Emperor penguins: TV crews are not allowed to barge into the penguin huddles, for fear of unsettling the birds, so they started hiding miniature cameras in fake rocks and eggs.

The technology is far more advanced now. Remote control turtles and caiman crocs were so convincingly real other animals didn’t give them a second glance.

A three-toed sloth was even more effective: one female very slowly sauntered up to it, rubbed its nose with hers and let out a yowl in its face that meant, ‘Why don’t you come up and see me some time?’ The camera sloth froze. Nobody told it lady sloths could play fast and loose.

Superpower of the night

At the same time David Tennant was narrating Spy In The Wild, he was also starring as the demon Crowley in Good Omens (BBC2). Tomorrow he heads the cast of C4’s Deadwater Fell. He’s not just good, he’s magic!

Other animals figured out that the spy was an imposter, but most of them didn’t object — except for a young elephant that took a dislike to an eavesdropping mechanical egret and stomped on it.

Spotting an intruder, capuchin monkeys in the Amazon screeched to frighten it away, but guessed within seconds that this was no ordinary primate.

To watch their faces in close-up as they peered and poked was fascinating. A whole range of recognisable emotions flickered over their features — first fear and anger, then crossness, followed by puzzlement, wariness and then curiosity.

All this was natural and uninhibited because they had no idea we were watching. That’s the marvel of this series.

Hugh Laurie is one of those actors who, like a capuchin monkey, can let a cascade of emotions flicker over his face, telling a story without speaking a word.

He did it at the start of Avenue 5 (Sky One), a sitcom by Armando Iannucci about a spaceship cruising the solar system with 5,000 fractious passengers. Hugh plays the charismatic, effortlessly capable captain, like a brainier version of James T Kirk. 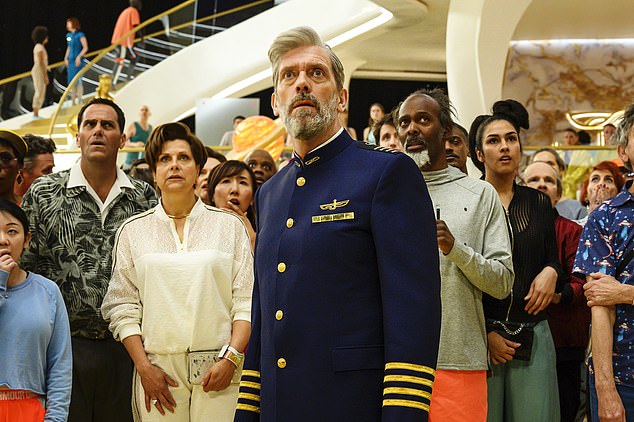 But hints of doubt and deceit flashed on his face when he thought no one could see. The moment he dropped the pretence and admitted he was a fake with no idea how to pilot an interplanetary cruiser, after a gravity hiccup hurled the ship off course, the twist felt believable. He’d slipped us the wink.

He’s not the only star. Rebecca Front is having the time of her life as a stroppy passenger with a Sharon Osbourne hairdo and an attitude to match.

But Avenue 5 is more like a send-up of disaster movies. It just happens to be set in space.

Related posts:
01/23/2020 Celebrities Comments Off on Even David Attenborough's never had to fend off a frisky female sloth!
Recent Posts
We and our partners use cookies on this site to improve our service, perform analytics, personalize advertising, measure advertising performance, and remember website preferences.Ok