EMILY PRESCOTT: Is U2’s Bono finally giving the hair dye a rest… as he’s spotted in the Caribbean with grey mop

Is Bono finally giving the dye a rest?

I only ask because the U2 star was snapped by a fan on the Caribbean island of St Barts with grey locks, just weeks after he appeared in Washington with his usual dark hair.

Bono, 62, references his troubled relationship with his hair in his autobiography, Surrender, explaining that when he watches videos of himself playing at Live Aid in 1985, ‘all I see is the ultimate bad hair day’.

BACK TO HIS ROOTS: Bono’s grey hair after he was snapped by a fan on the Caribbean island of St Barts with grey locks 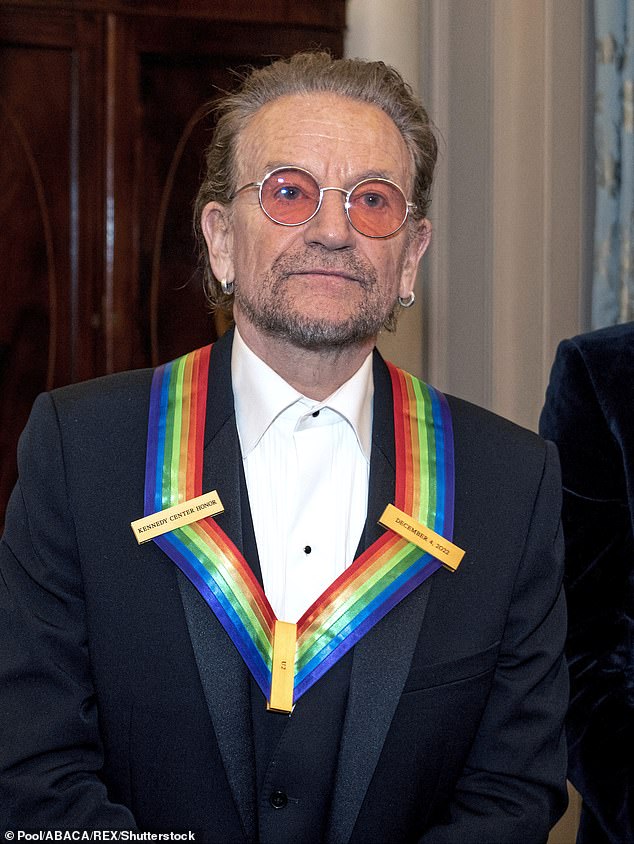 Former TV weather presenter Sally Johnson, 57, has been hit with legal fees of up to £1.5 million after a spat with ex-business partner Howard Spooner, an old pal of Prince Harry.

She sued and lost when their plan to turn Yarmouth’s George Hotel into an Isle of Wight celebrity haunt soured.

She says: ‘The purse may be considerably lighter, but I continue to count my blessings.’

War & Peace star Jack Lowden tells me he had to beef up by a stone-and-a-half for his latest role in BBC drama The Gold, which recounts the Brink’s-Mat bullion robbery.

At the launch event last week, the Scottish actor, 32, who turned up with his actress girlfriend Saoirse Ronan, revealed he used a boxing trainer to pack on the weight and to improve his posture and stance to get into character.

That’s how to become a knockout star!