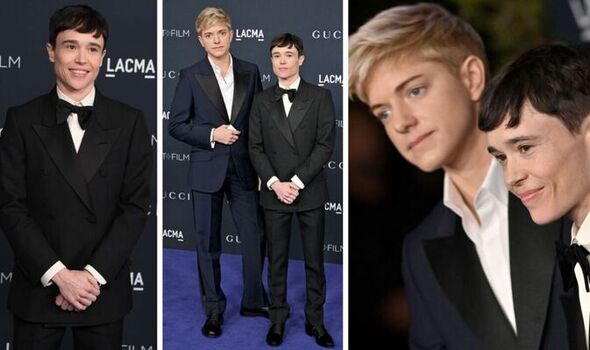 Elliot Page was described by Mae Martin on Instagram afterwards as “my king”, leaving fans in no doubt as to how close the pair – who have both been through gender-affirming journeys – seem to be.

The BAFTA award-winning actor Elliot Page, 35, attended the LACMA Art and Film Gala as part of a star-studded guest list including the likes of Kylie Jenner, Leonardo DiCaprio and Olivia Wilde.

The event, which was sponsored by high fashion giant Gucci, was the event of the season for many fashionistas and high profile figures of the art world.

The Umbrella Academy actor has recently undergone a journey of self-discovery, having confirmed in 2020 that he was transsexual.

He has since had breast removal surgery, told the world he uses the pronouns “he/him” and revealed that he had “known” he was a boy since he was a toddler.

Meanwhile, Mae identifies as a non-binary bisexual person, who has also had “top surgery” and uses the pronouns “they/she”.

Elliot Page and Mae Martin looked ultra fashionable as they flaunted their trim physiques in trouser suits by the brand.

The pair were joined by Elton John

Elton John, who was dressed by Gucci during his Farewell Yellow Brick Road tour, put on a performance at the gala the pair attended – and it went down a storm.

Billie Eilish and Jesse Rutherford posed for pictures while seemingly wrapped in a giant Gucci-monogrammed blanket together.

Elliot Page previously told the world during an Apple TV interview that getting surgery for breast removal changed his life, helping him to become the person he has felt he is inside since he was an infant.

Elliot Page prior to his transformation

Elliot Page was born female, but has since taken steps towards transition, including a mastectomy to allow him to adopt a more masculine aesthetic.