Daniel Kaluuya took home the Best Supporting Oscar at Sunday’s Academy Awards for his performance in Judas and the Black Messiah.

The 32-year-old British actor beat out Sacha Baron Cohen, Leslie Odom Jr., Paul Raci and his Judas and the Black Messiah co-star, Lakeith Stanfield, for the win. Kaluuya gave a powerful performance as Black Panther party chairman Fred Hampton in the film, and on Sunday, he thanked God and his mother.

“You give me everything, you give me your factory settings,” he quipped, to laughs from the audience. “Bro, we out here, yo!”

Kaluuya continued, thanking his team and those who helped bring Judas and the Black Messiah to life. “I share this honor with the gift that is Lakeith Stanfield, the light that is Dominique Fishback, the incredible cast, the incredible crew,” he continued.

“[Fred Hampton] was on this earth for 21 years, and he found a way to feed kids breakfast, educate kids, give free medical care, against all the odds,” Kaluuya shared. “He showed me how to love myself… thank you so much for showing me myself.”

The actor concluded his speech by noting the work that is still to be done for the community — by everyone in the room. As for his work, he’ll start after his celebration.

“I’m so happy to be alive, so I’m going to celebrate that tonight,” he said. “Peace, love and onwards, we go again!” 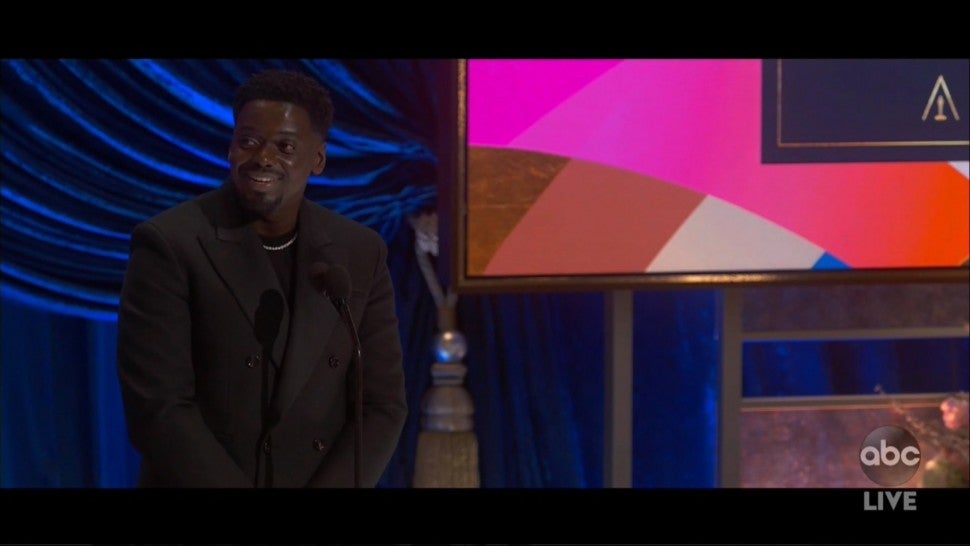 It’s been an incredible awards season for Kaluuya, who already won a Golden Globe, a Critics Choice award, a Screen Actors Guild award and a BAFTA award for his portrayal of the real-life Hampton. In February, he talked to ET after his big Golden Globe win and why it was important for him to carry on with his speech after initially getting cut off due to technical difficulties.

“I really wanted to speak because I wanted to give the recognition to what it’s supposed to be… to Chairman Fred Hampton and the family,” the actor explained. “We did this, but we did this to continue a legacy so that was the most important thing of mine.”

During the speech, he also paid tribute to the late activist, who died at just 21 years old during a police raid.

“I hope generations after this can see how brilliantly he thought, how brilliantly he spoke and how brilliantly he loved,” he said. “He taught me about myself and made me grow as a man. I appreciate it with all my heart. There is a lot of information about how he died but I hope people out there will grow and learn how incredibly he lived.”

Follow along at ETonline.com for all our Oscars live updates, including the Oscars winners list, updated as trophies are handed out.