Many have attempted the dreaded headbanger on Dancing On Ice, and in tonight's episode, it's Rebekah Vardy's turn to take on the scary stunt with her skating partner Andy Buchanan.

The mum-of-five, who showed off her secret skating past in a throwback video, revealed her nerves ahead of the big performance.

Speaking to The Sun on Sunday, the 38 year old said: "It's petrifying, but I'm an adrenaline junkie and I trust Andy completely.

"I know he would never let anything bad happen to me. It's given me a vote of confidence to be able to do those things. "I have to practise with a helmet, everything we're doing on the show is dangerous. I was buzzing after practising. It's just so much fun."

The stunt sees the male partner spin their female partner around by their ankles, with the person's head just inches away from the ice.

The headbanger has been performed by previous celebrities including Jorgie Porter and Beth Tweddle.

However, former skating professional Pam O'Connor was left needing stitches after the stunt went wrong when David Seaman dropped her on her head in 2011. 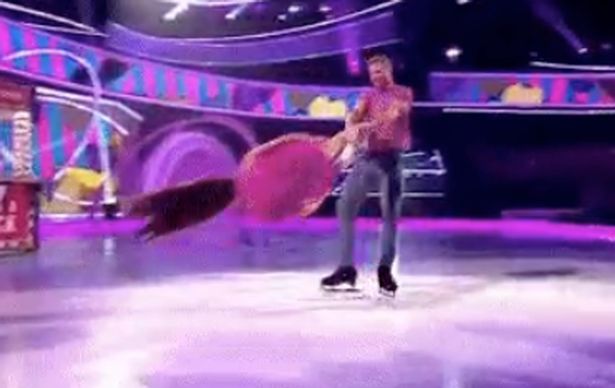 Rebekah also opened up to the publication about losing weight after spending months on the ice.

She expressed: "My body has changed. Andy says I need to stop losing weight, but I'm not doing it on purpose. He's like a big brother looking out for me.

"I've never weighed myself. All I know is that I feel really good. I'm in the best shape of my life.

"The costume department tell me off because I keep losing weight and they have to take in my outfits," Rebekah shared. "They'd say I was the most easy-going person to work with. I'm not demanding and I'll go with whatever they think is best."

The I'm A Celebrity star, who has reportedly "come to a temporary truce" with Coleen Rooney, previously slashed skating partner Andy with her blade.

While attempting a flip, the brunette beauty accidentally clipped Andy's face with her skating blade.

Andy's face began to pour out blood and he was rushed to hospital to get treated, leaving Rebekah horrified by the incident.