Dan Walker, 43, and co-host Naga Munchetty, 44, were reunited with one of their former BBC Breakfast presenters, Bill Turnbull, 63, in an emotional interview about living with cancer.

Bill was diagnosed with prostate cancer back in 2017 and appeared on the show via video link from his home in Suffolk.

The broadcaster said he was “feeling really very well” despite not being able to be in the Salford studio with his former colleagues.

He said: “The only reason I can’t be with you is not cancer-related, I’ve had a bug that I can’t quite shake off.”

It was wonderful to have you on Bill. You encouraged an awful lot of people

“But I’ve had no aches and pains for a long time and I feel remarkably cheerful and healthy,” he said with a smile.

Viewers could see Dan and Naga were happy to be back in the company of one of their former co-hosts, with Dan tweeting an emotional tribute to him after the show.

“It was wonderful to have you on Bill. You encouraged an awful lot of people,” he said.

Bill also tweeted a thank you to BBC Breakfast for having him back.

“Deeply moved and humbled by the love and support from @BBCBreakfast viewers today. Thank you very, very much. Every message of goodwill you send to someone helps them heal.”

Fans were glad to see the familiar face back on their screens: “You are a very much missed national treasure Bill!” One user gushed. 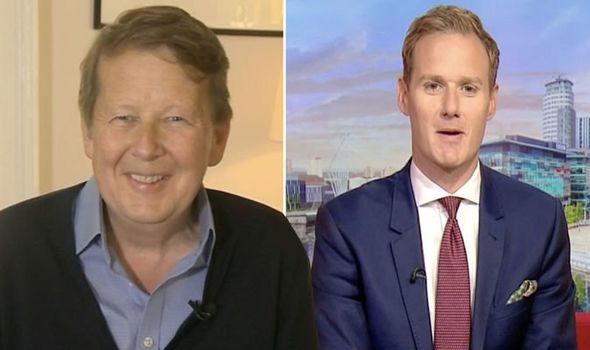 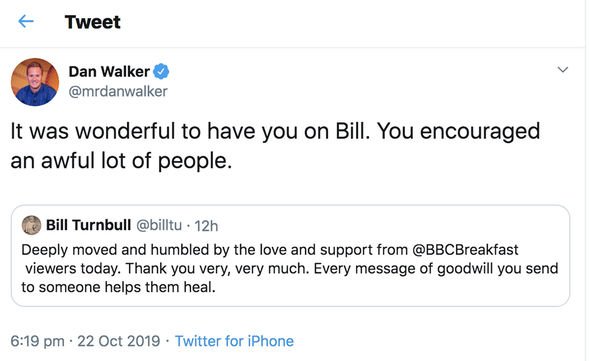 Another wrote a touching message addressed to the broadcaster: “Dear Bill, was so very lovely to see you looking relaxed and at peace with your journey. A beautiful reminder to enjoy each day and be a blessing to others. Thank You!”

“Your strength and determination is an inspiration to us all. Sending best wishes,” a third said.

Bill spoke about his new documentary on Channel 4 called Staying Alive, that followed him and his family for a year to see how they adjusted to life with cancer.

He told Dan and Naga that he “had a slight epiphany over the last couple of months” since filming the documentary had finished and that he came to a “realisation that things aren’t quite the way I thought they were”.

“I’m not in an adversarial relationship with my illness anymore, I just see it as, it’s a part of me, and let’s see if we can’t work together to get there.”

Asked for his current prognosis, Bill said: “The official prognosis would probably be that, when I started I was given 10, then 12 to 14 years, then my oncologist said he wants to get me to 80. 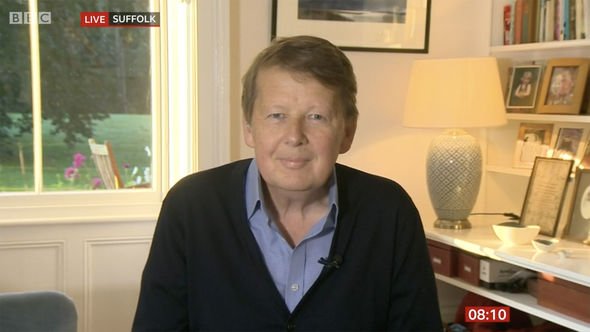 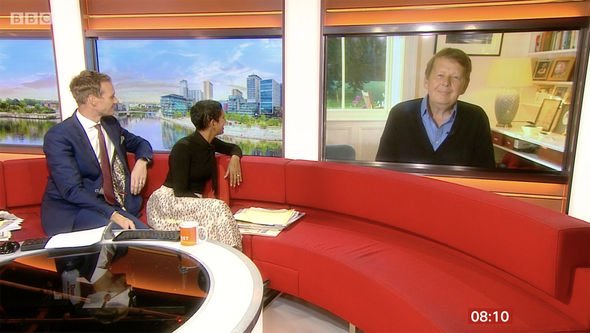 “If I can make myself get better that’s great, and if I don’t, well that’s fine as well.

“I’m just going to keep living as long as it seems a good thing to do.”

Signing off, the presenters said heartfelt goodbyes: “I love you Bill, miss you. Sending you a big hug,” Naga said.

Dan added: “It’s so lovely to talk to you, we get asked so regularly how you are, so it’s lovely to have you on the show today for many of our Breakfast viewers to see that you’re looking well and feeling well too.”

BBC Breakfast airs weekdays at 6am on BBC.