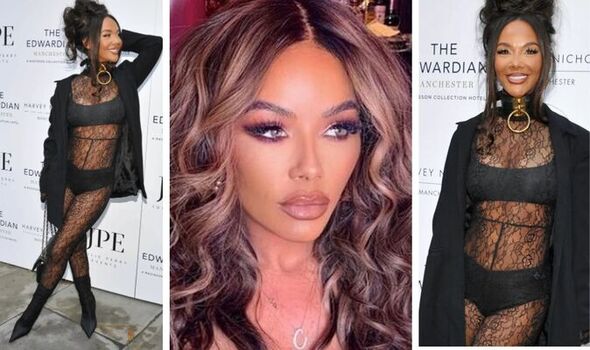 Chelsee Healey’s black bodystocking was her outfit of choice for a ladies’ lunch party at the Radisson Edwardian Hotel in Manchester courtesy of events planning entrepreneur Julie Perry.

Chelsee Healey, 34, didn’t let the pouring rain and raging wind deter her from expressing herself aesthetically, as she bared all in a skimpy sheer lace bodystocking.

The Hollyoaks actress – who previously appeared in the likes of Waterloo Road and Casualty – was on her way to The Julie Perry Party in Manchester when she unleashed her eye-catching new look.

She layered black underwear beneath her floral lace outfit, while she teamed it with a long open blazer and ankle boots, and clutched a quilted leather Chanel handbag.

The actress – who had a secret affair with a priest in her Hollyoaks role as Goldie McQueen – also wore a huge dog collar-style chunky choker around her neck.

She has been in the Channel 4 soap since 2016 – and is well known for her penchant for a glitzy outfit when she hits the red carpet.

Though it might have been a very revealing outfit, that didn’t deter Chelsee Healey from taking a walk in the street outside while wearing it.

Chelsee Healey paraded her phenomenal body in front of the crowds, which still remains flawless despite her welcoming a daughter, Coco, five years ago.

Chelsee Healey returned to the grindstone after just two months

A mere two months after giving birth to Coco, Chelsee Healey was back at work – and she has shared numerous photos of herself combining life as a soap star with caring for a little one.

Chelsee Healey landed herself in hot water with the public when they denounced her for attending a “quarantine rave” at Daisy Nook Country Park in Oldham during the pandemic, but she has since apologised for joining the 4000-strong crowd.

Chelsee Healey is no stranger to a revealing outfit

This is far from the first time that Chelsee Healey has dared to bare in a sheer outfit, as she donned this similarly jaw-dropping dress at the Inside Soap Awards, where she strode the red carpet along with her onscreen sister in Hollyoaks, Mercedes McQueen (Jennifer Metcalfe).