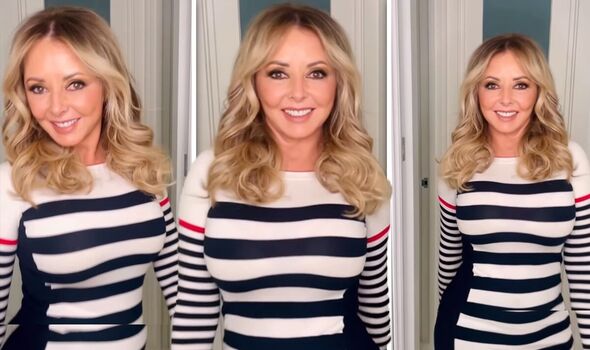 Carol Vorderman showed off her ageless figure as she took to Instagram to share her outfit of the day. The former Countdown star looked better than ever in a tight-fitted striped number.

Carol Vorderman, 62, showed off her ageless appearance as she took to Instagram on Tuesday to post a slow-mo catwalk style video.

The former Countdown star showed off her endless curves as she strutted her stuff in a black and white striped dress.

The illusion of the stripes further highlighted Carol’s curvaceous figure as she smiled at the camera.

She accessorised with tights and black boots while styling her blonde tresses in a curled look.

Carol also showed off her ageless complexion with her flawless makeup, consisting of a smokey-eye and a neutral lip.

Carol Vorderman wowed in the black and white striped dress

Carol Vorderman showed off her endless curves as she strutted her stuff in a black and white striped dress, highlighting her curvaceous figure. She paired this with leggings and a pair of black boots.

Carol Vorderman showed off her ageless appearance in the smouldering slo-mo video. The former Countdown star kept her gaze on the camera as she strutted in the catwalk-style video.

Carol Vorderman captioned the Instagram video: “PERFECT 10 TUESDAY. Get your Tuesday started with @perfect10carol. 10 questions. 10 points. All done in 10 minutes. Listen to today’s episode from the link in my bio, or wherever you get your podcasts. And as always… Please head back here and comment below to let me know how many points you get today Xx.”

Carol Vorderman lifted the lid on her sex life as she made an appearance on This Morning last week. She admitted: “When I was in my 20s I wanted to get married and have children. In my 60s I have a full life and I live with my children. I don’t want to settle with anybody, I love my job, the business of education, and a busy home. People don’t want just one partner, we’re all single. There’s one rule: do no harm.”

Carol Vorderman also lifted the lid on her five lovers

Carol Vorderman admitted on This Morning that her lovers “all know about each other” and said life changed since she dreamed of being married to one man in her 20s. She said: “It was interesting I talked about it [multiple partners] off the cuff but the reaction was almost all positive.”

Carol Vorderman has been married twice

Carol Vorderman was married to Christopher Mather for a year between 1985 and 1986. She then went on to marry Patrick King in 1990 with whom she had two children. Their marriage did not last however as their divorce was finalised in 2000.