The swanky restaurant where revenge is the order of the day: BRIAN VINER reviews The Menu

Skewering the solemn pretension that surrounds elaborate, exorbitant restaurant-cooking is nothing new.

Twenty years ago, a TV series called Posh Nosh did it deliciously, with Arabella Weir and Richard E. Grant as the frightfully la-di-da owners of the Quill & Tassel, who talked about ’embarrassing’ the aubergine in a glazed pan and ‘disabling a partridge in its own jus’.

So The Menu, a dark comedy or, if you prefer, mirthful horror film, set in a ridiculously high-end restaurant on a small island, isn’t what you’d call hugely original.

Moreover, the film’s satirical targets — the imperious celebrity chef, his obsequious staff, the reverential customers, cooking as conceptual art — are extremely easy prey. With no apology for my foodie metaphors, it really is like shooting sushi-fresh fish in a barrel.

All that said, The Menu is enormous fun throughout, and as you might expect of a cast led by Ralph Fiennes and Anya Taylor-Joy, gloriously acted.

Fiennes plays Julian Slowik, who runs his famously exclusive restaurant, Hawthorn, like a fascist dictator. When he claps his hands, his kitchen brigade snap to rigid attention. When he commands the diners not to eat his extraordinary food but to ‘taste, savour, relish’ it, they melt with admiration. 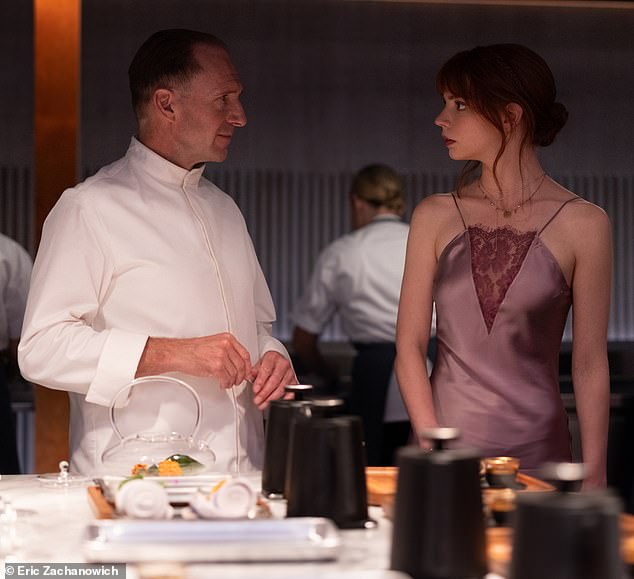 The Menu is enormous fun throughout, and as you might expect of a cast led by Ralph Fiennes and Anya Taylor-Joy (pictured), gloriously acted

The story unfolds over the course of a single day and night, beginning with the arrival, by boat, of Hawthorn’s customers for that evening’s service. They include a young couple, Tyler (Nicholas Hoult), who worships Slowik, and Margot (Taylor-Joy), the only guest left cold by his genius.

Then there’s influential restaurant critic Lilian Bloom (Janet McTeer) and her devoted editor, a movie star (John Leguizamo) and his PA/girlfriend, an older couple who are clearly regulars, and three bumptious male colleagues on a corporate jolly.

They are all met off the boat by the restaurant’s humourless maitre d’ (Hong Chau), whose stony-faced welcome — ‘we’ll endeavour to make your evening as pleasant as possible’ — sounds ominously insincere. Dinner, they are told, ‘typically lasts four hours and 25 minutes’.

That offers plenty of time for whatever chef Julian has in store for them, which only gradually becomes apparent.

As it does, the story’s lack of originality again comes into focus. Without wanting to give anything away, I was strongly reminded of a brilliant Argentinian film, Wild Tales (2015), in which a commercial airline pilot takes ultimate revenge on a group of passengers.

By lampooning wealth and excess, The Menu also mines the same seam as this year’s winner of the Cannes Film Festival’s Palme d’Or, Triangle of Sadness.

And there are vivid echoes of any number of Agatha Christie adaptations — think of this film as Death On The Napkin — as we are whisked from table to table, discovering a little more each time about the guests and their grubby secrets. 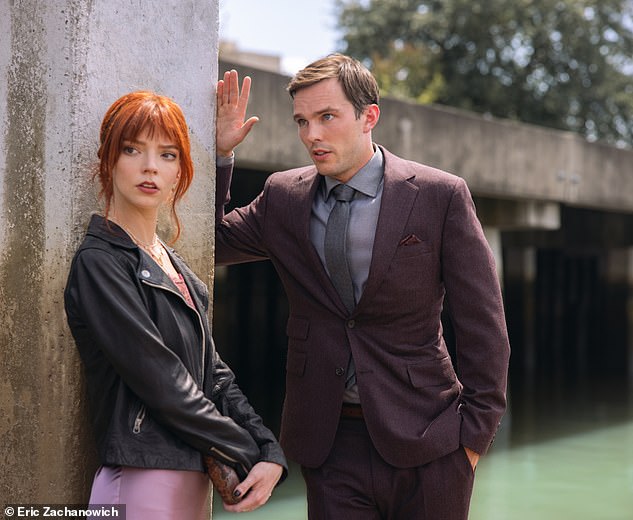 The story unfolds over the course of a single day and night, beginning with the arrival, by boat, of Hawthorn’s customers for that evening’s service. They include a young couple, Tyler (Nicholas Hoult), who worships Slowik, and Margot (Taylor-Joy), the only guest left cold by his genius

Still, most entertaining movies, doubtless like most great dishes, are derivative in one way or another. And before things start getting decidedly gruesome in The Menu, there is some cherishable mickey-taking of culinary posturing.

I laughed out loud at the ‘breadless bread plate’, chef’s way of dealing with the tendency of customers to eat too much of the stuff. ‘It’s fiendish!’ declares an approving Bloom.

For such a terrible conflict, the Vietnam War didn’t half inspire some great movies, including Platoon, Full Metal Jacket, The Deer Hunter, and this nightmarish epic from Francis Ford Coppola.

Another of the courses, simply called Memory, is inspired by Slowik’s own traumatic childhood recollection of stopping his father from assaulting his mother. Which is not that much of a leap from being supplied with earphones so that you can listen to the sound of crashing waves while eating seafood — as once happened to me at a swanky restaurant in the Home Counties.

Screenwriters Seth Reiss and Will Tracy plainly had a hoot with all this, inventing dishes such as Dungeness crab with fermented yogurt whey, and allowing the sommelier to rhapsodise about a wine’s note of ‘barnyard funk’.

And British director Mark Mylod, whose early TV credits include Cold Feet and The Royle Family but who has more recently worked on the fantastically acerbic drama Succession, has a sure feel for edgy comedy.

You will need a strong stomach, but The Menu is richly enjoyable fare.

Another top-notch cast is led by Sir Anthony Hopkins, Anne Hathaway and Jeremy Strong, although the most eye-catching performance comes from young Banks Repeta. 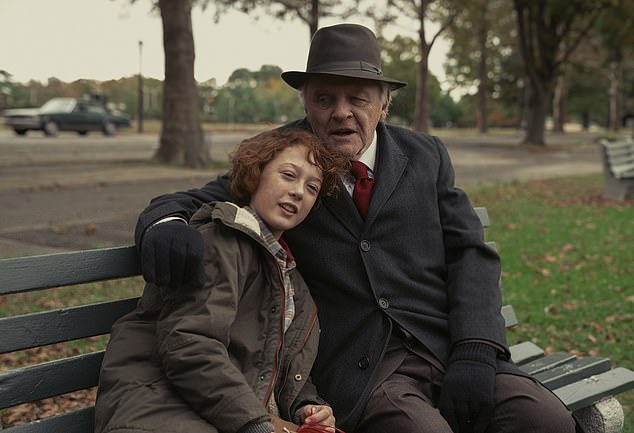 Another top-notch cast is led by Sir Anthony Hopkins (right), Anne Hathaway and Jeremy Strong, although the most eye-catching performance comes from young Banks Repeta (left)

Very engagingly, if a little self-consciously at times, Gray plunges us into cinematic territory already well-explored by the likes of Noah Baumbach and Woody Allen.

We follow Paul’s relationships with Johnny, his devoted mother (Hathaway), limited father (Strong), and tender grandfather (Hopkins), who turns out to have escaped Nazi-occupied Europe by fleeing first to Liverpool and then to America, little of which explains his gentle Welsh accent, but never mind; Hopkins gives his usual masterclass.

It’s a tale about race, religion and bigotry but also social mobility, as Paul’s parents and grandparents invest in him all the hopes that they have failed to realise for themselves.

And as a bonus, as if to remind us of his film’s factual roots in 1980s New York City, Gray even deals up a couple of Trumps.

Let the glow from this gem warm your heart

Eclipsing many more lavishly funded pictures, Aftersun was one of the treats of this year’s Cannes Film Festival.

There is no conventional linear narrative. Rather, we are made to feel like privileged spectators over the course of a pretty uneventful Turkish holiday sometime in the 1990s, watching the tender relationship between a young Scottish dad, Calum (Paul Mescal from the TV hit Normal People, successfully concealing his Irish accent), and his 11-year-old daughter, bright-as-a-button Sophie (newcomer Frankie Corio, giving one of those debut performances that go down as absolute marvels of naturalism, whether they presage a successful career or not).

Aftersun is a debut of sorts, too, for writer-director Charlotte Wells, who has previously made only short films. I hope she goes on to other things, but I certainly can’t say greater things, for this is a gem of observation, absorbing from beginning to end. 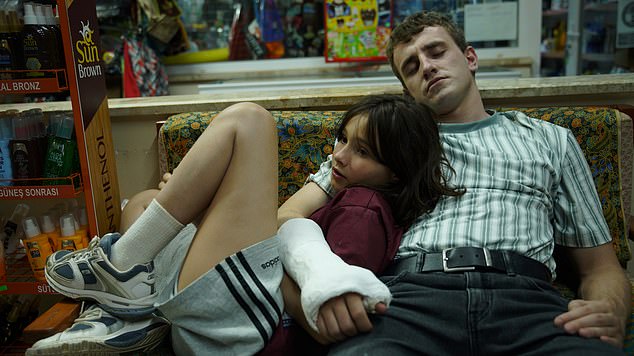 We are made to feel like privileged spectators over the course of a pretty uneventful Turkish holiday sometime in the 1990s, watching the tender relationship between a young Scottish dad, Calum (Paul Mescal), and his 11-year-old daughter (newcomer Frankie Corio)

Calum is divorced or separated from Sophie’s mum and he has moved to England to find work, so the holiday is a rare opportunity for father and daughter to spend quality time together.

Nevertheless, they have an easy, loving rapport, which isn’t really threatened by anything that happens in Turkey, yet incrementally Wells drops hints of profound sadness in Calum’s life, as well as the odd suggestion that tragedy might be about to strike.

The film is not autobiographical, but does evidently borrow from Wells’s own memories of childhood holidays (the hotel that turns out to be a construction site, the reps performing the Macarena, the karaoke night, the snogging teenagers) and indeed from her own relationship with her father.

Accordingly, she flashes forward a few times to herself (or, at least, the older Sophie), which compounds a sense of melancholy that never quite lifts — nor is it meant to. Yet this is not a dispiriting picture, and those of you of a certain age will get a buzz from the 1990s soundtrack alone.

ALSO SHOWING… Jon Hamms it up as bumbling hero

Almost 40 years have passed since Chevy Chase first played Fletch, the investigative journalist with an unfortunate talent for getting mixed up in the crimes he reported.

A mooted series of films ended after just two, but now Jon Hamm slips into the title role in Confess, Fletch (15, 98 mins, ***). 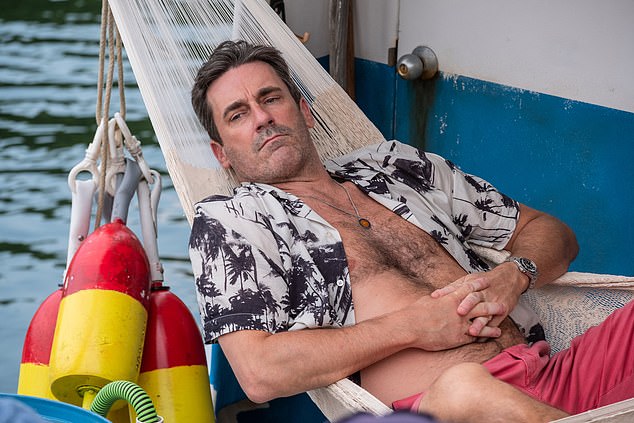 A mooted series of films ended after just two, but now Jon Hamm (pictured) slips into the title role in Confess, Fletch

Whatever, the dialogue gets a bit relentlessly wisecracky, but there are some genuinely funny lines and a couple of cracking scenes, with Hamm also getting strong support from Kyle MacLachlan and the fabulous Marcia Gay Harden.

Spirited (12A, 127 mins **), on Apple TV+, is yet another attempt to adapt A Christmas Carol, this time as a musical comedy with Will Ferrell and Ryan Reynolds goofing around as the Ghost of Christmas Present and the modern-day Scrooge he must try to redeem.

Despite their undoubted talents, it’s not funny and, as a Christmas film, puts the holly in wholly exploitative.