This Black History Month, ET is celebrating the stars who took a stand. From speaking out during the civil rights movement of the 1950s and 60s to calling for racial equality and justice over the summer of 2020 and beyond, these Black celebrities used their platforms to amplify important issues.

Late stars like Billie Holiday and Muhammad Ali stuck to their convictions, drawing national attention to causes like racial oppression and the Vietnam War, respectively. Beyoncé and LeBron James, meanwhile, have used their star power to fight for justice in the names of Breonna Taylor, Jacob Blake and more.

See how more Black celebs have used their platforms for activism below. 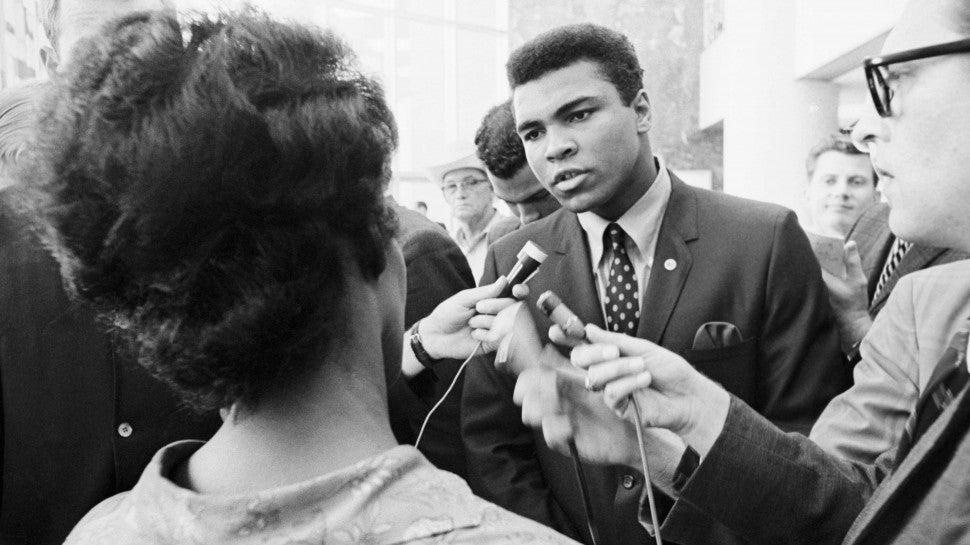 The Greatest was forced to take a four-year break from boxing for his position as a conscientious objector to the Vietnam War, but he didn’t give in. The champion boxer, who died in 2016 at age 74, fought back until his conviction was overturned by the Supreme Court in 1971. He lost his prime years in the sport, but gained respect and admiration for standing up for what he believed in, and is credited with inspiring countless Black Americans in the civil rights era. 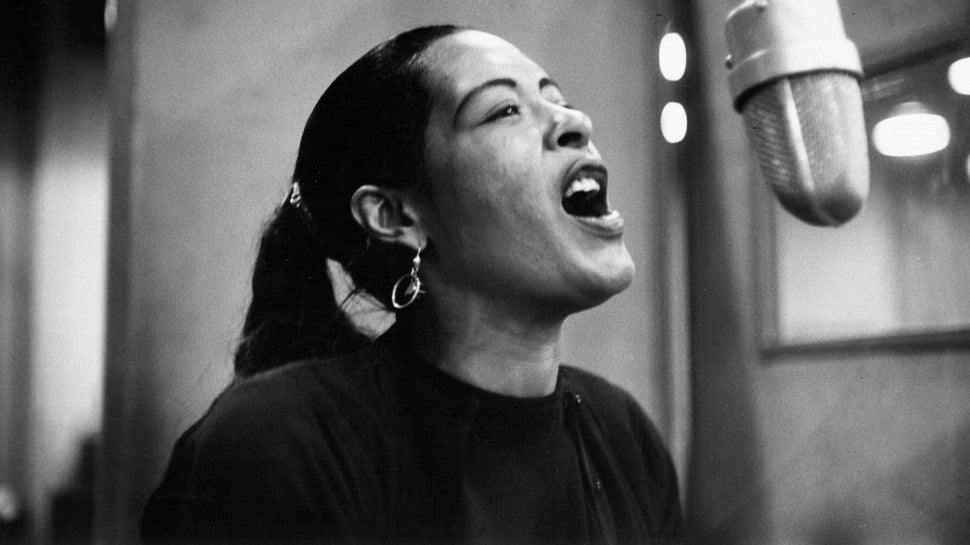 Holiday died in 1959 at just 44 years old, but among her achievements, she’s remembered for her contribution to the civil rights movement. Her rendition of the song “Strange Fruit” — a song based on a poem about lynching — in the late 1930s drew public attention to racial oppression and injustice. When her label, Columbia Records, refused to record and distribute the song, she recorded it with Commodore Records. It became the great civil rights protest song, propelling the movement. 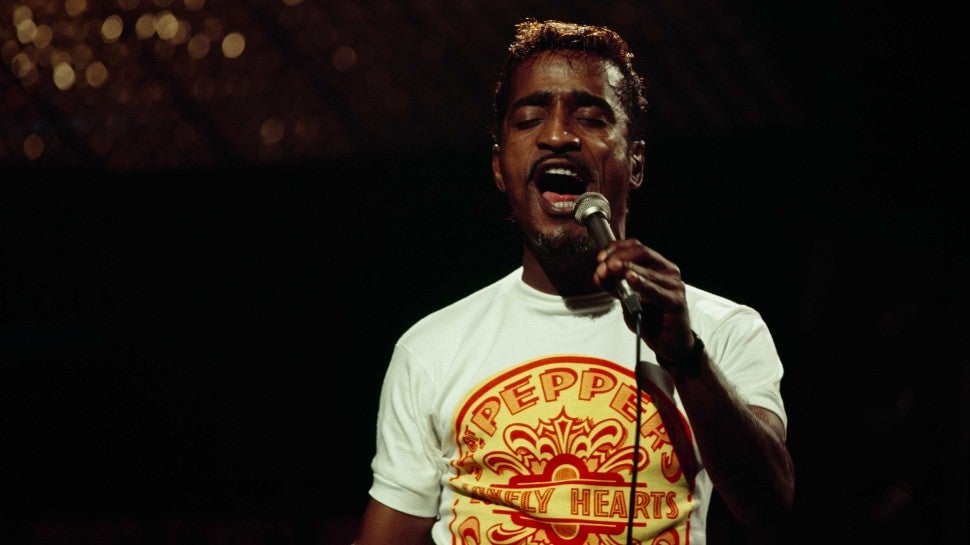 The performer, who died in 1990 at age 64, helped break racial barriers in the segregated entertainment industry, from Las Vegas to Broadway. Like other Black entertainers, Davis used his success — and earnings — to support the civil rights movement. The multi-hyphenate’s 1960 marriage to a white woman, Swedish-born actress May Britt, at a time when interracial marriages were illegal in the majority of U.S. states allegedly led to John F. Kennedy rescinding his invitation to perform at his inauguration. A few years later, he received hate mail when starring in the Broadway musical adaptation of Golden Boy — for which he received a Tony Award nomination for Best Actor. Davis’ continued success in the industry made strides for representation, and among other achievements, he’s a recipient of the Kennedy Center Honors. 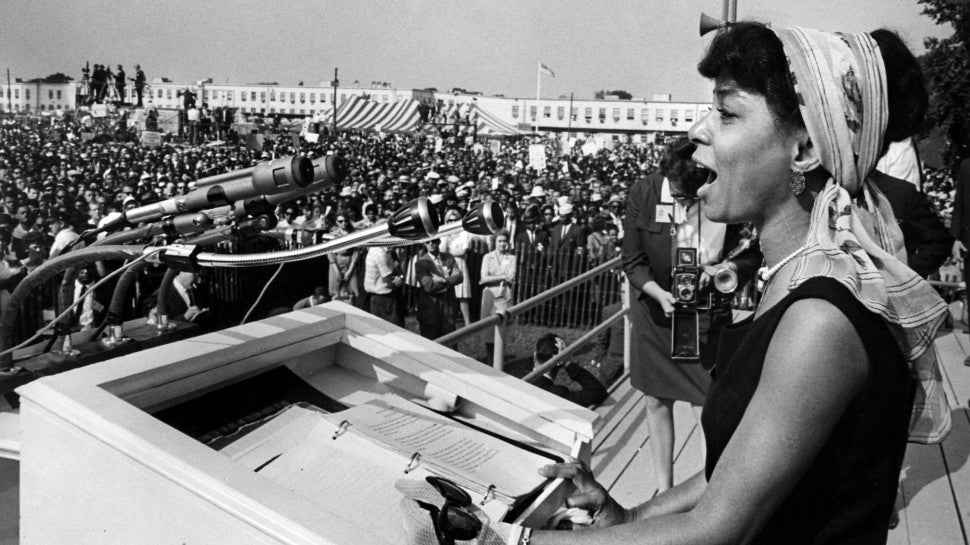 Dee is as prominent an activist as she is an actress. The Oscar-nominated performer, who died in 2014 at 91, was a well-known member of the civil rights movement, and close friends of both Martin Luther King Jr. and Malcolm X. Dee was a member of the Congress of Racial Equality (CORE), the NAACP, the Student Nonviolent Coordinating Committee and the Southern Christian Leadership Conference, and emceed the March on Washington in 1963. Dee continued her activism in the later part of her life with her husband, actor Ossie Davis, who died in 2005. That year, they were honored with the Lifetime Achievement Freedom Award by the National Civil Rights Museum. 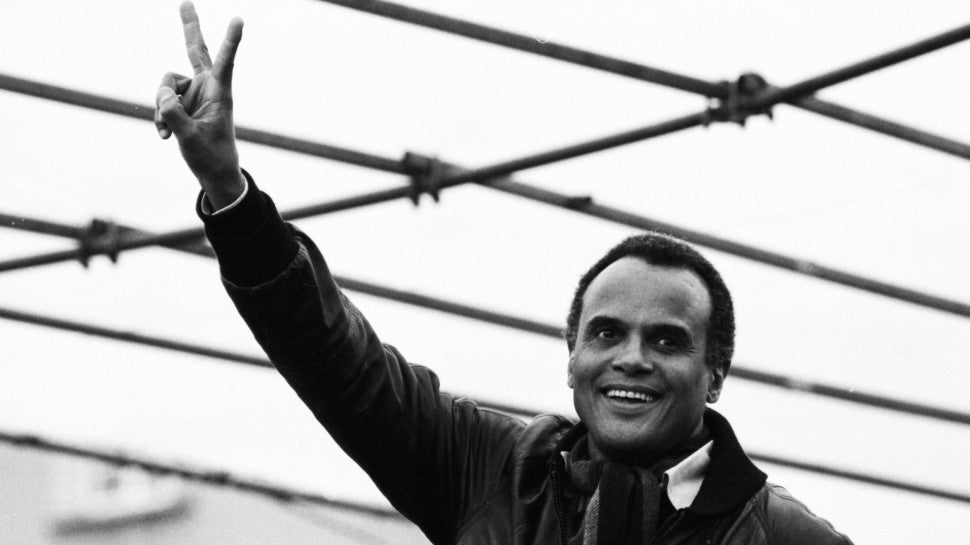 The 93-year-old musician and recipient of a GRAMMY Lifetime Achievement Award has been an advocate for political and humanitarian causes throughout his life. Belafonte was heavily involved in the civil rights movement in the 1950s and 60s, and a close confidant of Martin Luther King Jr. He is said to have financially supported King’s family throughout the course of their friendship, bailed him out of Birmingham City Jail during the 1963 Birmingham Campaign, financed the 1961 Freedom Rides and helped organize the 1963 March on Washington. 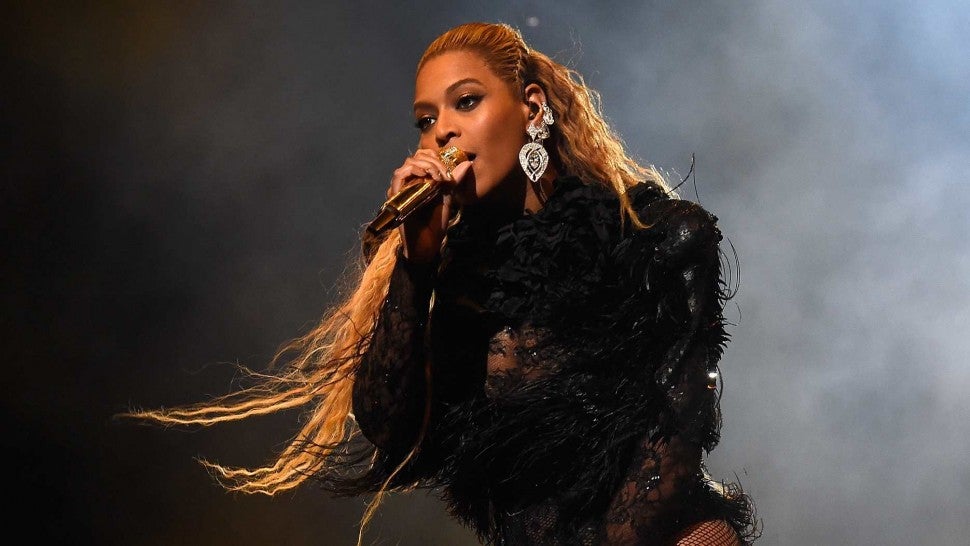 The 39-year-old artist has continuously used her platform to stand up for causes she believes in. She’s promoted feminism in many ways, including sampling Chimamanda Ngozi Adichie’s speech in her song “Flawless,” supported the rights of LGBTQ+ community with powerful statements and taken an impactful stance against police brutality and injustice. Beyonce, who included the mothers of Trayvon Martin, Michael Brown and Eric Garner in the video for her song “Freedom,” has also recently made headlines for her dedication to justice for Breonna Taylor, after she wrote a letter to the Kentucky Attorney General. 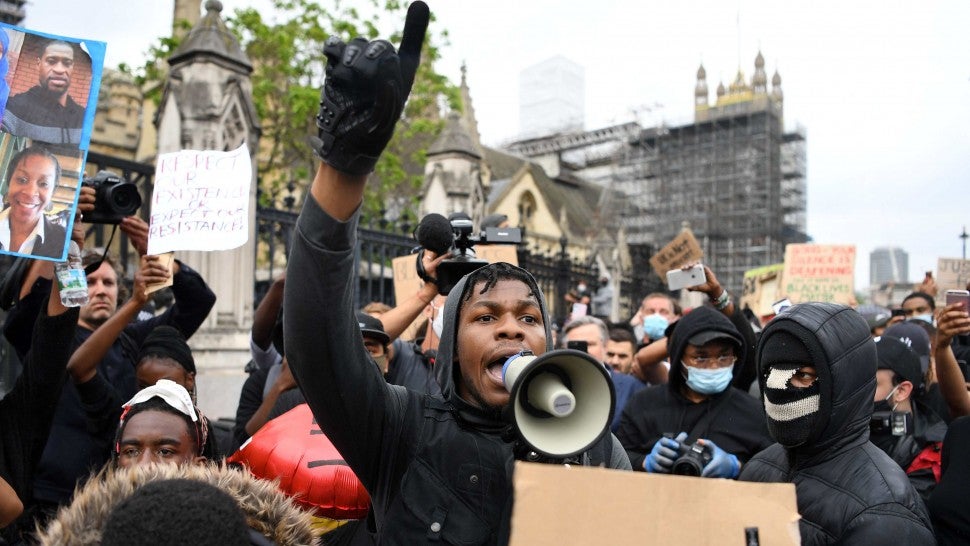 The Star Wars star made headlines last summer when he gave an emotional, impassioned speech at a protest in London following the death of George Floyd. In the months after, Boyega continued to speak out about inequality, including in the entertainment industry — and Star Wars. The 28-year-old actor, who has been open about the racism he faced after The Force Awakens, noted that he and BIPOC co-stars like Kelly Marie Tran were relegated to more supporting roles later in the trilogy, and urged the industry to do better.

“I feel it was just me expressing how I feel about certain issues,” Boyega told ET last October. “I just feel like it probably hit at a time where people can relate and a lot of people in that position would have probably said the same thing, so it’s always good to have someone that has a stage and a position to be able to speak from a very true perspective and it was an honor to be able to do that for you all.” 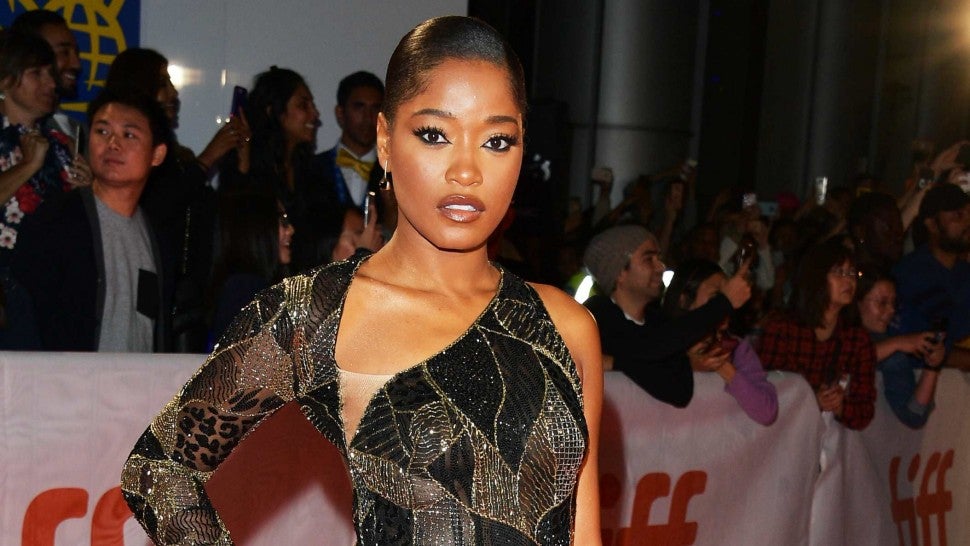 Palmer’s powerful exchange with National Guard soldiers at a Black Lives Matter protest in Los Angeles last June left fans inspired. The 27-year-old performer pleaded with guardsmen to march with her and other demonstrators, to stand with their community against police brutality, inequality and oppression.

“I gotta really be serious about what I’m involved in and not always expect everything to be perfect,” she told ET in August. “We gotta stick together, we gotta be engaged. We gotta be involved… be prepared to [put] my, you know, working gloves on and get to work.” 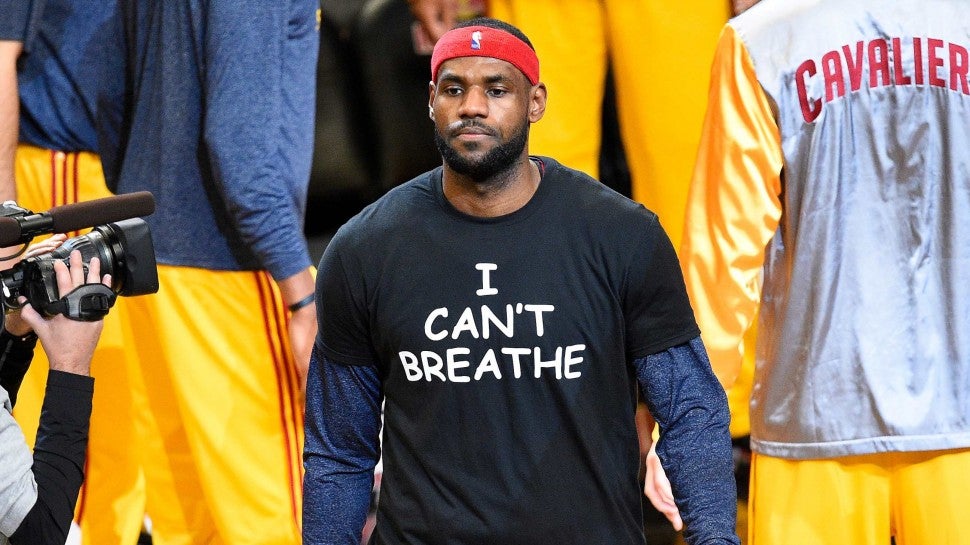 The NBA star uses his platform to give back and enact change. In July, James was one of many high profile players to make a statement about the calls for social justice around the world, redirecting questions during their first press conference about their return to the game to shed light on the murder of Breonna Taylor. The 36-year-old athlete also helped organize an NBA strike following the shooting of Jacob Blake in August — which led to the league establishing a social justice coalition and agreeing to convert several arenas into polling stations. 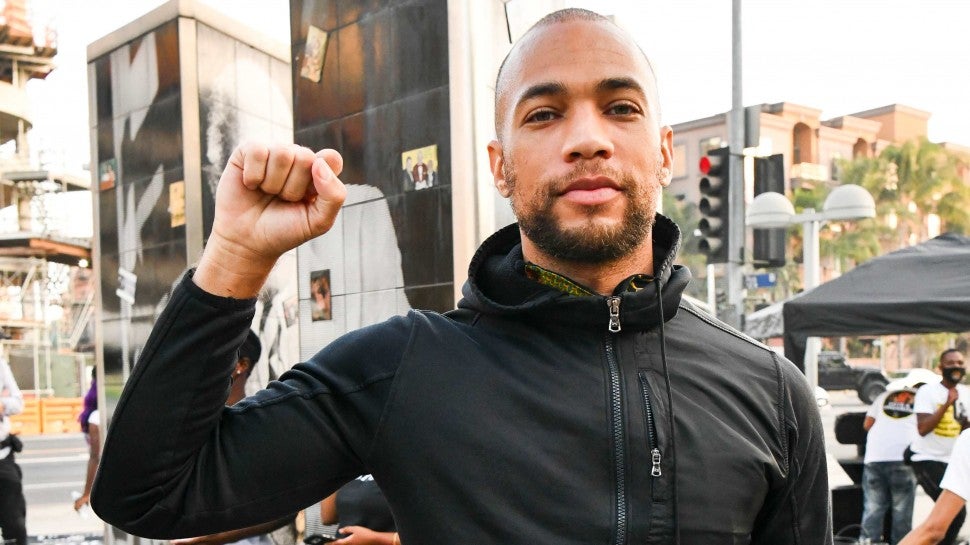 Fans of the Insecure actor have seen him elevate mental health issues in the Black community on and off screen for years, but last summer, Sampson made even more of an impact. The 32-year-old actor and his non-profit organization, BLD PWR, collaborated with Black Lives Matter LA on many demonstrations and initiatives — and he continued to show up after being hit by rubber bullets and a police baton at a peaceful protest in May.

In an interview with ET that month, Sampson said he was hopeful things would change. “I feel like right now, as heavy as it is, what I hear organizers, activists, and people involved in liberation work saying all over the United States is that their hope is in the fact that people are primed for an ideological shift,” he shared. “People are fed up and these systems are exposed. And it is forcing people to expand their imagination as to what’s possible.” 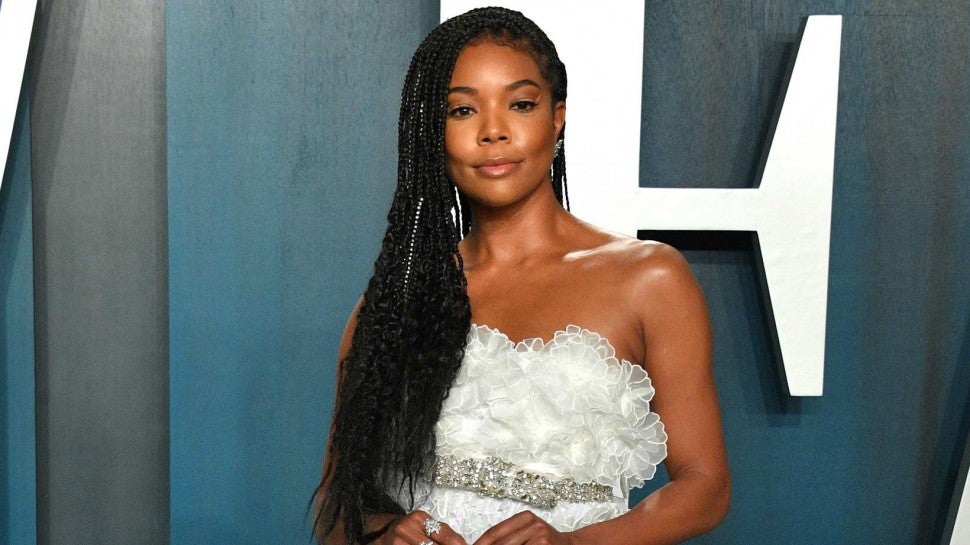 For decades, the 48-year-old actress has used her platform to speak about infertility issues and advocate for sexual assault survivors. In 2019, she took a stand against workplace harassment, and brought her claims of a “toxic culture” at America’s Got Talent to light.

Union alleged she was subjected to racist jokes and acts on set, and criticized by network executives for hairstyles that were “too Black.” The actress inspired fans and friends to share photos of their hair, to promote acceptance and pride for Black styles. And after filing a harassment, discrimination and retaliation complaint against NBC, Simon Cowell, Fremantle and Syco Entertainment with California’s Department of Fair Employment and Housing in Los Angeles last summer, Union and NBC reached an “amicable resolution.” 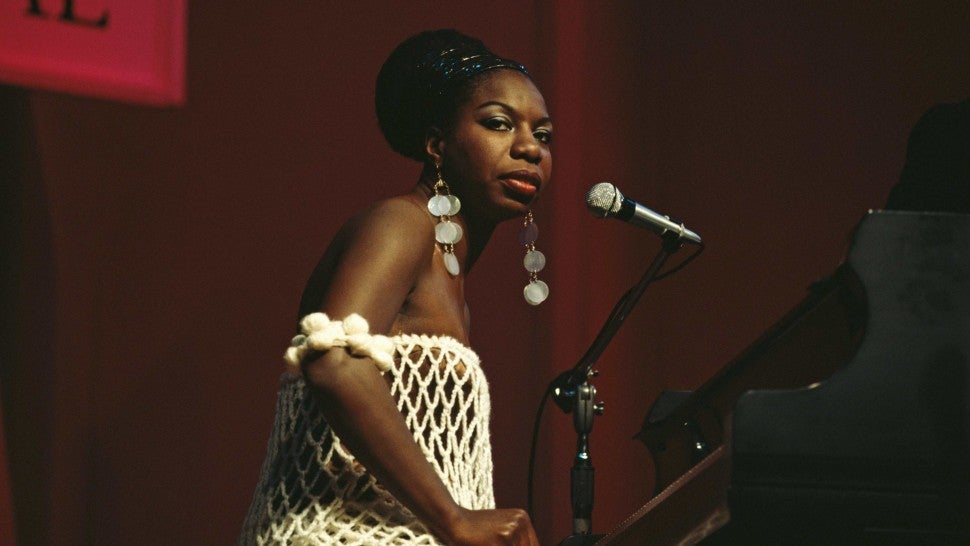 The GRAMMY-winning singer died in 2003 at age 70, but leaves behind a legacy of activism. Simone, who attributed her denial from the Curtis Institute of Music in Philadelphia to racism, became an outspoken proponent of racial equality and justice. The performer took part in the Selma to Montgomery marches and recorded several songs that became civil rights anthems, including “Mississippi Goddamn” and “To Be Young, Gifted and Black.” Simone also advocated for Black women, hoping to inspire them to reject societal beauty standards and embrace and celebrate their natural beauty. 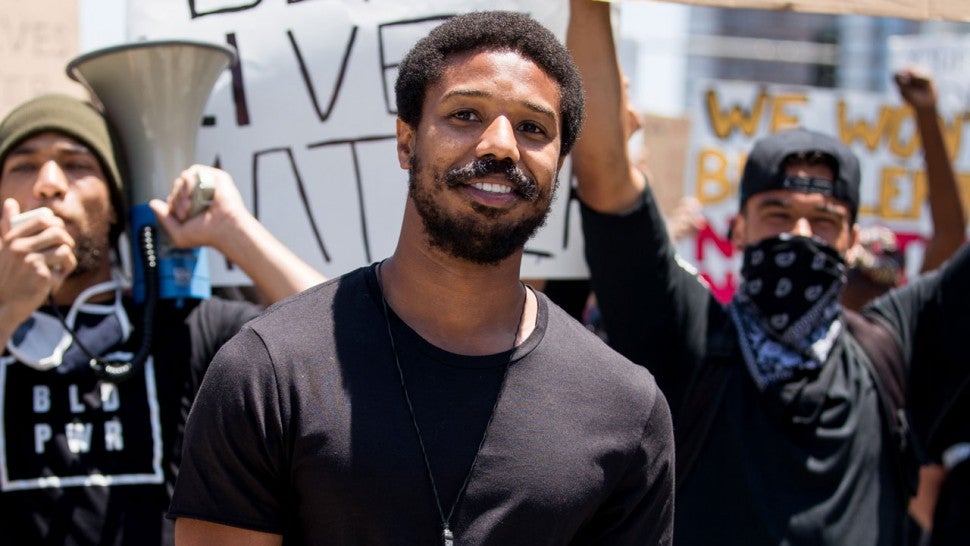 Jordan spoke out at a Los Angeles march in June about how he’s learned about racial injustice through the characters he’s played in movies like Fruitvale Station, Black Panther and Just Mercy. He urged the entertainment industry to do a better job of promoting Black stories and elevating Black voices in front of and behind the camera, and he’s led by example. In 2018, the 33-year-old actor adopted an inclusion rider across all projects attached to his production company, Outlier Society. 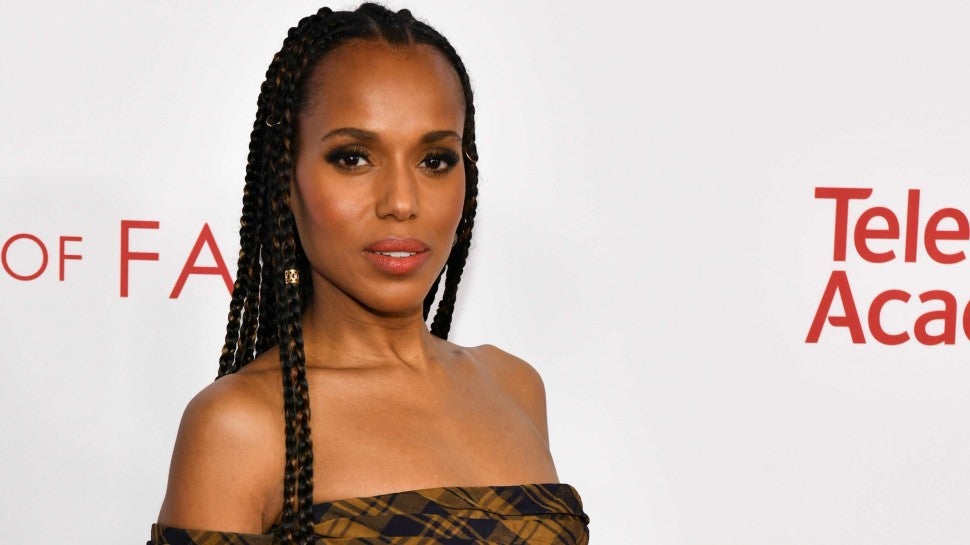 The 43-year-old actress has promoted numerous social justice and political causes over the years, including voter registration, gun control, LGBTQ+ rights, and her work within the Black Lives Matter, #MeToo and Time’s Up movements. On screen, she’s told important stories and started powerful conversations with roles in films like 2016’s Confirmation, which centered on Anita Hill’s sexual assault allegation against Justice Clarence Thomas, and 2019’s American Son, which brought attention to police brutality and the killings of Tamir Rice, Eric Garner and Philando Castile. 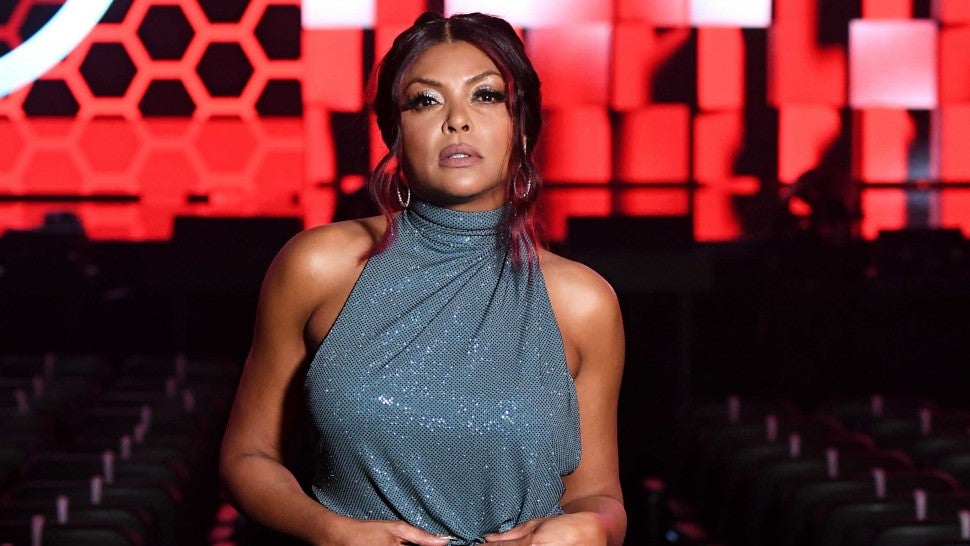 Henson has been instrumental with her advocacy in the mental health space. The Empire star has been open about her own battle with depression, and in 2018, she started the Boris Lawrence Henson Foundation, an organization aiming to eradicate the stigma around mental health issues in the Black community. Henson has also made strides in normalizing conversations about mental health, as she talks it out with her longtime friend, Tracie Jade Jenkins, on her Facebook Watch series, Peace of Mind With Taraji.

“It’s a peace of mind. It’s educational, it’s an opportunity for us to show you, actually, what it looks like inside of a therapist’s room,” Henson told ET. “I mean, think about what we go through as Black people. Police brutality, microaggressions, not being paid equally … it’s a lot. It’s a lot to unpack, and we felt like we needed some kind of programming that you didn’t have to pay for and makes you feel safe.”

02/02/2021 Celebrities Comments Off on Black Celebs Who Took a Stand, From Muhammad Ali to Beyoncé
Recent Posts