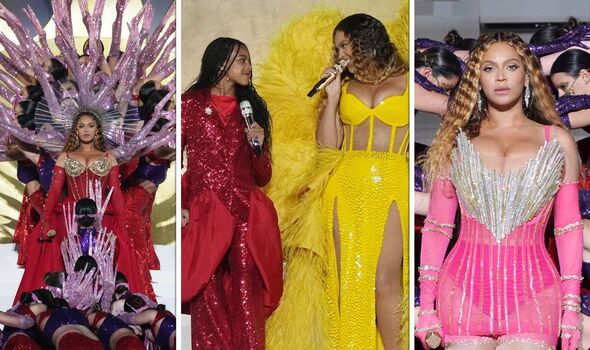 Beyonce wows in ab-flashing outfit despite backlash as she invites Blue Ivy, 11, on stage

During her private concert on Saturday, the Queen of Pop’s daughter made a surprise appearance and even treated fans to a live performance of their duet, Brown Skin Girl.

During her private concert on Saturday, the Queen of Pop’s daughter made a surprise appearance and even treated fans to a live performance of their duet, Brown Skin Girl.

The Single Ladies singer stunned in a canary yellow dress, with tasteful ab-flashing cutouts all accessorised with a fan of yellow feathers behind her.

More surprises lay in store for the crowd as Queen Bey made not one, but two, outfit changes into equally jaw-dropping looks.

Shortly before her performance, the singer was steeped in controversy for accepting a $24million (£19million) payday for the concert despite the anti-LGBTQ policies of the United Arab Emirates.

Other celebrities like David Beckham and Robbie Williams faced similar backlash last year for appearing in Qatar during the World Cup.

On Twitter, Beyonce’s fan base erupted as critics claimed her wealth and fame had been “largely, if not entirely” gained through her “LGBTQ+ fans”.

Others also argued she “doesn’t need a penny” of the paycheque, but still agreed to perform.

However, many praised the singer following the concert, saying that despite her hiatus, she is still “so far beyond the current music industry’s standard that it’s glaringly obvious she’s one of the few examples of musical excellence”.

The singer’s concert marked the launch of a new luxury hotel, Atlantis The Royal, in Dubai.

The textured yellow gown was made by Atelier Zuhra and styled by KJ Moody, featuring thigh-high slits on both legs and a sheer corset that highlighted the mum-of-three’s abs.

11-year-old Blue Ivy stood her own, harmonising with her mum

The young singer opted for a different colour theme rather than matching her mum, wearing a red sparkling blazer and trousers, covered with a matte red skirt and gently accessorised with large gold hoop earrings.

Lebanese designer Nicolas Jebran created the look, featuring long, embellished gloves and a corset that highlighted the singer’s enviable curves, enhanced by a steel halo behind the singer’s head.

In an ensemble created by Ukranian designer Frolov, Beyonce flaunted her cleavage in a low-cut, sheer mini-dress with bright pink shorts underneath and a statement sparling bust piece, complete with long silver and pink gloves and dangling earrings.

Beyonce’s first concert in years was sure to make a spectacle, featuring the Mayyas, winners of America’s Got Talent season 17, as well as a 48-person all female orchestra called Firdaus.