WIMBLEDON, England — The cream rose to the top at the Wimbledon draw ceremony on Friday morning, when the first quarter filled in the women’s singles competition included the WTA No. 1, the defending champion, the 2017 champion and a certain 23-time Grand Slam singles champion.

Serena Williams, seeking her eighth Wimbledon title and 24th Grand Slam singles title over all, has struggled with a knee injury this season, but is always a contender at the All England Club, where she was runner-up last year.

She will open on Tuesday against the Italian qualifier Giulia Gatto-Monticone. After facing Kaja Juvan or Kristyna Pliskova in the second round, Williams could face the 18th-seeded Julia Görges in a rematch of last year’s semifinal.

Another rematch — against fifth-seeded Angelique Kerber, who defeated Williams in last year’s final — looms in the fourth round. To reach that match, Kerber might have to beat Maria Sharapova, a five-time Grand Slam champion returning from another setback with her troublesome right shoulder, in the third round.

If Williams gets through to the quarterfinals, she could meet the No. 1 seed, Ashleigh Barty, who rose to the top spot in the rankings when she backed up her French Open championship with a title on the grass courts of Birmingham, England.

But Barty also has a tough path through the first four rounds. She opens against 43rd-ranked Zheng Saisai and could face the two-time Grand Slam champion Svetlana Kuznetsova in the second round before battling the 2017 Wimbledon winner, Garbiñe Muguruza, in the third.

In the fourth round, Barty could face Belinda Bencic, the soaring Swiss player who has improved her ranking to 13th from 55th this year, or the 22nd-seeded Donna Vekic, who has reached three grass-court finals in her young career. 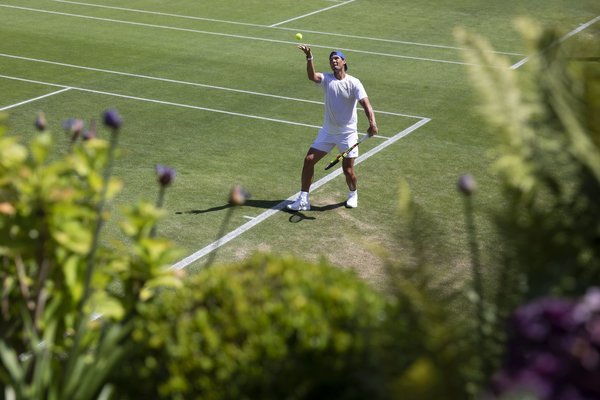 Asked about the glut of A-listers in Williams’s part of the draw, her coach, Patrick Mouratoglou, said: “I think it’s bad luck — for them. I wouldn’t like to be in the part of draw with Serena.”

The crowd of contenders in the top quarter leaves the rest of the draw relatively open. The second quarter features fourth-seeded Kiki Bertens and the two-time Wimbledon champion Petra Kvitova, who is seeded sixth, but Kvitova’s participation remains in doubt because of an arm injury that forced her out of her last two tournaments.

The bottom half of the draw is anchored by second-seeded Naomi Osaka, the reigning Australian Open and United States Open champion. She was dealt a tough opening match against the 39th-ranked Yulia Putintseva, against whom Osaka is 0-2, including a loss earlier this month that ultimately cost her the No. 1 ranking.

Also in Osaka’s quarter is a meeting on Monday between the five-time Wimbledon champion Venus Williams, 39, and the American qualifier Cori Gauff. Gauff, 15, is the youngest qualifier in Wimbledon history. She grew up idolizing the Williams sisters, who combined to win 10 Grand Slam titles before she was born.

In the men’s singles event, Roger Federer and Rafael Nadal landed in the same half of the draw. Though Nadal is ranked No. 2 and Federer No. 3, Federer, an eight-time Wimbledon champion, was bumped ahead of Nadal by the tournament’s seeding formula because of his stronger grass-court results.

Nadal, who beat Federer in the semifinals of the French Open this month on his way to the title, could have a dangerous second-round opponent: Nick Kyrgios, the Australian who notched his first of three career victories over Nadal at Wimbledon in 2014. Fifth-seeded Dominic Thiem is also in Nadal’s quarter of the draw.

Top-seeded Novak Djokovic begins his title defense on Monday against 57th-ranked Philipp Kohlschreiber, a German veteran who beat Djokovic earlier this year, but has lost to him twice since. The highest-ranked player Djokovic could face before the semifinals is seventh-seeded Stefanos Tsitsipas, whom Djokovic beat in the final of the Madrid Open in May.

The highest seed in the other quarter on Djokovic’s side is last year’s runner-up, No. 4 Kevin Anderson. He has struggled with an elbow injury this year and has played only four tournaments. Ranked eighth, Anderson also was pushed up the seedings by Wimbledon’s formula.

Wimbledon will feature a few other veterans coming back from injuries. John Isner, a semifinalist at the All England Club last year, is entered in his first tournament since sustaining a stress fracture in his left foot during the Miami Open final in April. And Andy Murray, a two-time Wimbledon champion from Britain who had hip surgery in January, will be competing in men’s doubles and possibly mixed doubles.