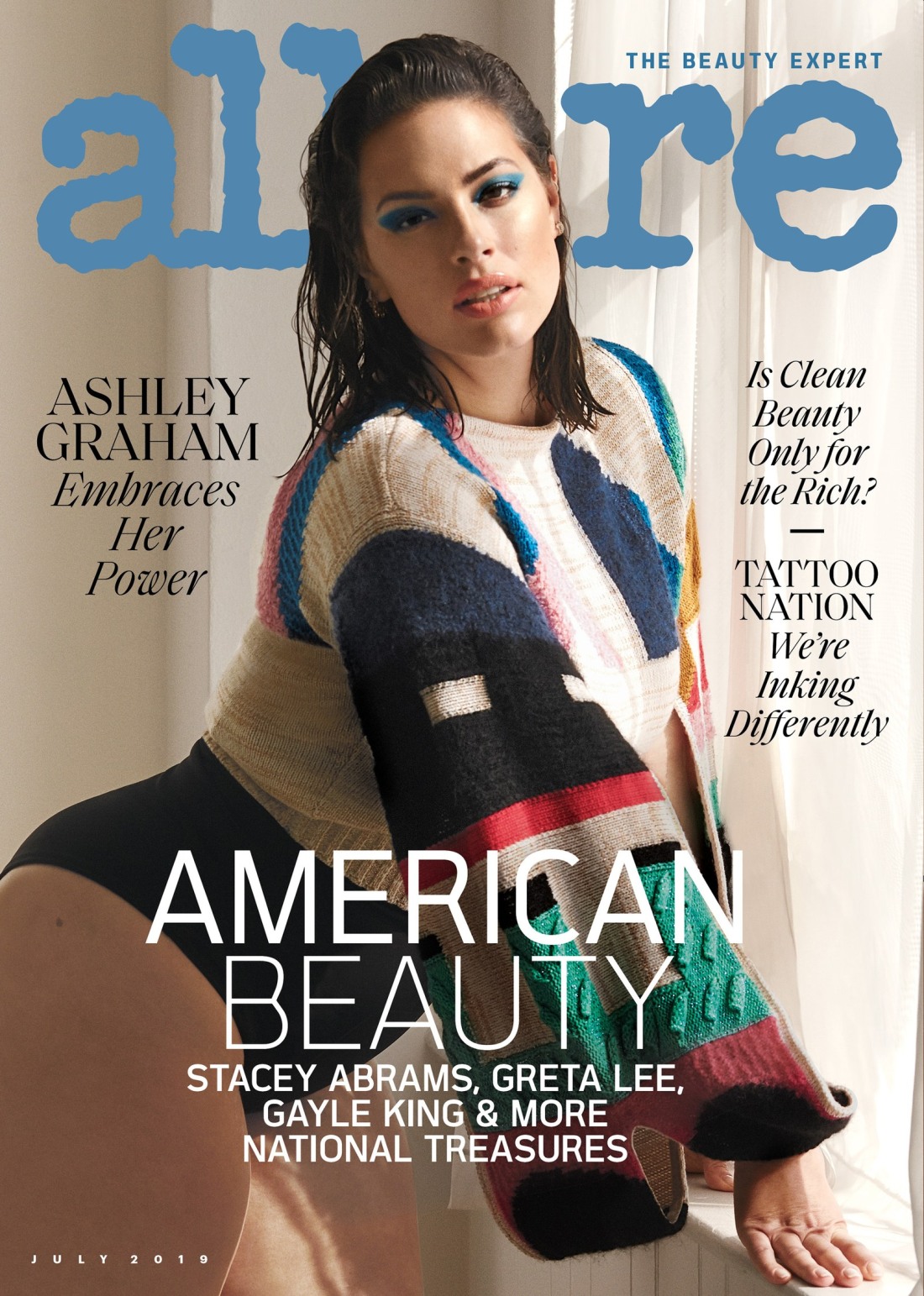 Usually, when a magazine puts a woman larger than a size 2 on their cover, the magazine will just use a headshot, or something from the waist up (and even that’s rare). The idea is “look at us, we’re so inclusive for putting a bigger girl on our cover, but also we don’t want to hurt your eyes by actually showing her body.” So in that sense, I love that Allure actually showed us Ashley Graham’s body on the July cover. It’s unique and great. That being said, I don’t like the composition of the cover shot, but we can’t have everything, right? Anyway, I used to find Ashley a tad bit extra, but she really has grown on me a lot. She knows she doesn’t do and say everything the right way, but she’s trying, she’s learning and she’s committed to being a good ally across the board. You can read her Allure interview here. Some highlights:

Seeing how Tyra Banks worked: “Being [a judge] on America’s Next Top Model, I got to see firsthand how Tyra [Banks] produced and hosted the show all at the same time,” Graham says. “There wasn’t even a teleprompter — she had everything memorized. She would deliver it three different ways, and then she would tell everybody on set: ‘I want this angle; I want that light on me here.’ And she did it all without apologizing.”

So that’s how she decided to run American Beauty Star. “I wasn’t apologetic. I was very matter-of-fact, but I did it with a smile on my face. That’s how people run businesses.”

Starting her size-inclusive lingerie line when she was 23: “Everybody asks me if I have any regrets in my career. The only regret I have is not starting that business sooner.”

Using her podcast to discuss the intersectionality, tokenism & sexism: “I see what my husband has to go through every day. We had gone to Italy, and a man spat on him. It’s heartbreaking. It can make you really angry. But it’s like, how are you going to change that anger into a teachable moment?”

How to work on those big problems: “Read books; have conversations. Educate yourself. The more you have conversations with people around you that are different than you, [the more] you’re going to learn and you’re going to grow. No one who isn’t black is going to understand a black person’s life, but they don’t have to be ignorant toward [what it’s like]. I want to know as much as I can as a white woman who is going to be raising black children. We’re going to have to have that conversation of ‘Mommy’s white, Daddy’s black,’ and I want to be prepared.”

Beauty & inclusion: “The biggest thing that we have to conquer is diversity and inclusion. You can’t just check the box and be like, ‘Oh, we did it.’ I have never looked at tokenism as a bad thing, as long as the brand, the client — whoever has the mission — continues to branch out and say, ‘This was our first time; next time we’re going to add more of the race, the gender, the sexuality, the religion, the disability,’ whatever it is,” Graham says. And a group isn’t truly represented, she continues, if it’s only outward-facing. True representation is when a type of diversity is considered “not just through the advertisement, but internally,” among the company’s employees and executives. “Stop talking about hiring [diverse candidates] and just do it.”

On how her body is treated: “My body has always been treated as a thing and not mine. You’re the sexy girl. You’re the naked girl. Men are going to idolize your hourglass figure. It was always about what others thought about my body, until I gained a voice. Now I get to tell people what I think of my body.”

“No one who isn’t black is going to understand a black person’s life, but they don’t have to be ignorant toward [what it’s like].” That’s one of the better statements about privilege and race I’ve heard from someone who looks like Ashley. I also like how impatient she is and disgusted that beauty companies and fashion companies aren’t making more changes faster. She was the first plus-sized model to land a major beauty contract (with Revlon) and so far… she’s been the only one. She must feel less like she broke down that barrier and more like people see her as “the exception” they’re willing to make. I also love what she says about not being purely against tokenism, and I feel the same way – someone has to be first, someone has to break ground and hopefully things will move from there. The problem is that things really haven’t moved much.

“My body has always been treated as a thing and not mine. It was always about what others thought about my body, until I gained a voice. Now I get to tell people what I think of my body.” Link in bio for @ashleygraham's full cover story. — #photography: @vanina_sorrenti #hair: @bobrecine #makeup: @jameskaliardos #manicure: @ohmynailsnyc #styling: @alexwhiteedits #writer: @jess_chia

“My body has always been treated as a thing and not mine. It was always about what others thought about my body, until I gained a voice. Now I get to tell people what I think of my body.” Link in bio for @ashleygraham's full cover story. — #photography: @vanina_sorrenti #hair: @bobrecine #makeup: @jameskaliardos #manicure: @ohmynailsny #styling: @alexwhiteedits #writer: @jess_chia

Photo and cover courtesy of Allure.

07/09/2019 Celebrities Comments Off on Ashley Graham: ‘I have never looked at tokenism as a bad thing’
Recent Posts