Every once in a while, one of the Kardashians does something so outlandish that it makes me think, Wow, stars really *are* just like us. And on this glorious Thursday afternoon, it’s supermodel extraordinaire Kendall Nicole Jenner, who resorted to peeing in a car after having to go *that* badly. Now let me add the crucial detail: said vehicle was en route to the freakin’ Met Gala. Kendall was more than happy to spill (pun intended) on Pee-gate™️ and the fact that some of it got on her Prada shoes. 🤧

The whole saga was recounted on this week’s episode of The Kardashians, where Kenny had to find a desperate bathroom solution just before making her way up the steps of the Met Gala. “I need to drink a sip of water, and I need to pee. Nobody judge me,” she told her entourage in the van. But with nowhere to go, someone suggested using an ice bucket—an idea that was initially laughed off by the supermodel before she ultimately decided that…well, if ya gotta go… ¯\_(ツ)_/¯. 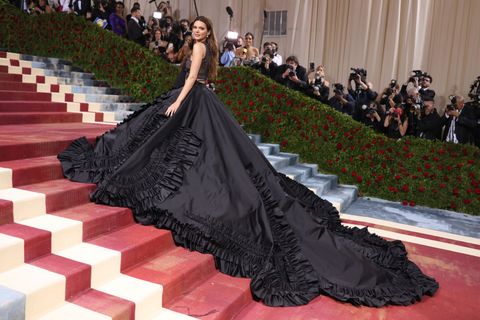 “That is so mortifying for whoever has to deal with my pee later. I’m so sorry,” she said. And though viewers never saw who had the unfortunate job of cleaning that up, there was a pretty hilarious exchange about potentially selling the celeb’s pee. Others chimed in and said using buckets actually wasn’t thaaaaaat odd because apparently “it happens all the time backstage.”

Kendall then proceeded to announce, “It’s going to happen, but someone needs to run music because I can’t let you guys listen to me pee,” which, fair. “This is so wrong, I’m going to cry,” she squealed. “This is so wrong, I can’t. Prada, I’m so sorry,” she said before confessing she’d just peed on her feet accidentally. Despite the mishap, in a later confessional the model admitted that going to the bathroom in the van actually turned out to be the “best decision I’ve ever made because I don’t know what I would have done when I got inside.” 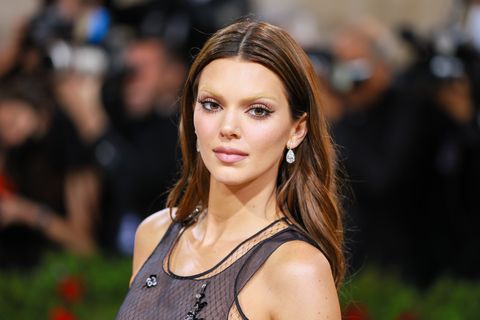 Even with all that happening behind-the-scenes, Kendall truly did look stunning that night in her Prada ‘fit and mostly turned heads because she completed her ensemble with a new bleached eyebrow situation. Honestly? I’m willing to bet no one even suspected there was pee on her feet.