“Affectionately called ‘Chiz,’ he was an actor and storyteller like none-other, embodying loyalty, devotion, and compassion to his artistry. We lost a great one today.”

A cause of death was not immediately revealed.

Chisholm’s death comes after M&C reported the death of actor Ben Jorgensen, who played Kevin Sheffield on ABC’s All My Children. Friends confirmed that Jorgensen died from suicide at 51.

Singer Johnny Nash, known for his 1970s smash single, I Can See Clearly Now, also passed away earlier in the month at 80. 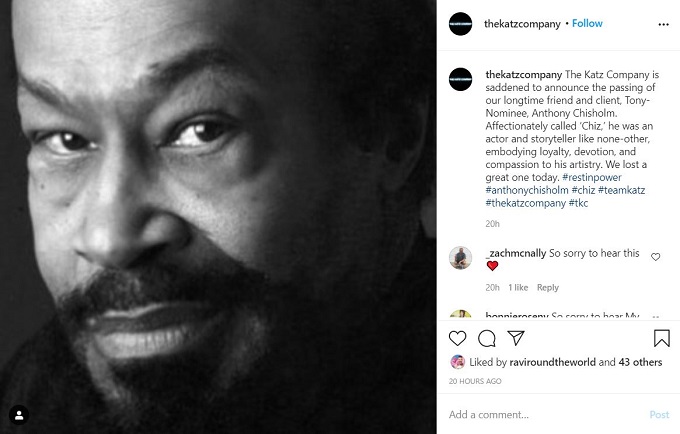 Tributes pour in from friends and fans

Tributes have been pouring in on social media since Chisholm’s’ management company broke the news of his death earlier today.

“Why did I think you would live forever? Love you Anthony… The acting world will miss your wisdom, your immense talent, your generosity,” she tweeted.

Anthony Chisholm was a stage and screen actor.

After serving in the U.S. Army as a platoon leader during the Vietnam War, he launched his acting career.

Chisholm started as a stage actor, appearing in several off-Broadway theater productions, including The Boys from Syracuse and The Threepenny Opera at Cleveland’s Karamu House.

He also appeared in Jitney, which won the Tony Award for Best Revival of a Play in 2017.

In 2007, Chisholm was nominated for a Tony Award for Best Featured Actor in a Play for his role in Radio Golf.

He also received other awards, including the Ovation Award, the NAACP Theatre Award, and the AUDELCO Award.

10/18/2020 Celebrities Comments Off on Anthony Chisholm death: Tony-nominated veteran actor dies at 77
Recent Posts
We and our partners use cookies on this site to improve our service, perform analytics, personalize advertising, measure advertising performance, and remember website preferences.Ok