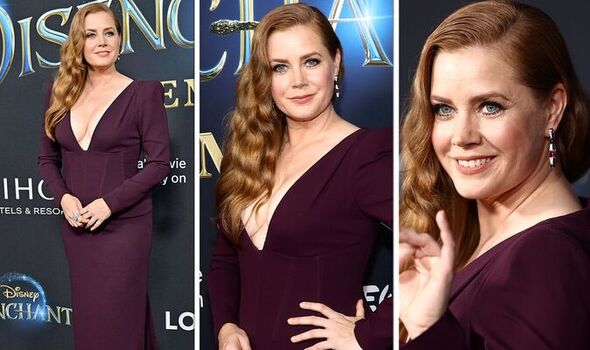 Amy Adams, 48, has returned to her fan-favourite role as Giselle from the 2007 hit film Enchanted.

Amy Adams, 48, has returned to her fan-favourite role as Giselle from the 2007 hit film Enchanted.

The actress flaunted her physique in a plum-coloured corseted dress, with a generously low-cut neckline.

She let her auburn hair loose for the event, sporting natural curls that swept along her shoulders.

The Enchanted sequel has been 15 years in the making and has gathered most of its original stars for the comeback, including Amy and Patrick Dempsey.

Disenchanted is available to stream on Disney+ from November 18.

Amy added some sparkle to her look

The actress accessorised with a chunky, silver ring and long metallic earrings.

Amy looked effortlessly elegant and graceful as she posed for the photographers.

Amy poured herself in the figure-hugging corset top, which gave way to a small train pooling behind her.

Amy drew attention to her baby blue eyes with dark mascara while opting for a nude lipstick.

She led a line of A-Listers down the carpet

Amy skyrocketed to international fame with her role as the whimsical princess Giselle in 2007.