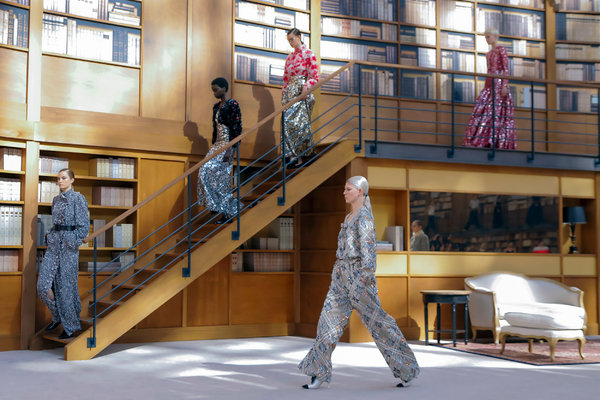 PARIS — Something unexpected has happened at the Paris couture — the tippy tippy top of the European fashion pyramid and the beating heart of its identity. Steadily, quietly, seemingly overnight (though obviously not) it has become defined by women: not those to whom it caters, but those in charge.

The three most famous French couture houses are now designed by women: at Chanel, Virginie Viard is artistic director; at Dior, Maria Grazia Chiuri; and at Givenchy, Clare Waight Keller. Meanwhile, the most singular newgen brand on the schedule, Iris van Herpen, is (duh) run by its namesake. That may not sound like a lot, but in a contracting discipline it means the balance of the power of influence is in their hands. Like what they do or not — and the results were mixed — there is no question, as the shows got underway, that a troika dominated the conversation.

And that, in itself, is a step forward.

On Monday night, Marlène Schiappa, the French minister of state for gender equality, presented the Légion d’honneur to Ms. Chiuri. In front of a crowd that included Chimamanda Ngozi Adichie, Bianca Jagger and a host of cheering LVMH Moët Hennessy Louis Vuitton executives, Ms. Schiappa put it this way: “You proved to all women you could change things by doing it yourself.”

Then she applauded Ms. Chiuri’s work to recast Dior as a feminist brand (heavy-handed though the messaging can be). This happened a few hours after a Dior show in which Ms. Chiuri focused on clothes as the “first space in which you define yourself,” and couture as the ultimate in personalization.

That she did so with a collection that was almost entirely in black was both a declaration of self — “black is a very personal color to me,” she said backstage before the show, wearing a black kimono, a black shirt and pants highlighting the details in pieces straight from her Dior vernacular. But look closer at the Bar jackets, spaghetti-strap party gowns and small-shoulder tailored coats, and note the sheer point d’esprit undershirts beneath the corsetry, the feathered fishnet shoes climbing to the thighs under a puff skirt, the elegant drape of a coat secured on a hip. And remember: When clients order the clothes, they can choose the colors.

In this, the show was less overtly activist than some of Ms Chiuri’s other collections. Though she has made something of a specialty of the slogan tee, starting with her first “We Should All be Feminists” collection, the only writing this time around belonged to Bernard Rudofsky and a question he raised in 1944 in MoMA’s first fashion exhibition: “Are Clothes Modern?”

(To be fair, Ms. Chiuri did frame the show with an installation by the feminist artist Penny Slinger, which transformed the Dior headquarters on Avenue Montaigne into an eerie watery habitat through which goddesses blinked and an ancient tree twined, so she hadn’t entirely eschewed her theme.)

Ms. Chiuri didn’t answer the question, exactly, and her relentless procession of princess dresses, her iteration after iteration of nipped-in waists and molded hips, can seem stuck paying allegiance to another era (the silvery twists in an armor-like lamé column, on the other hand, had a resolutely contemporary cast). But in her insistence on a woman’s right to choose — what goes on her body as well as everything else — the designer is very much of her moment.

Just as Ms. Viard, the former right hand of Karl Lagerfeld who has been charged with carrying on his legacy at Chanel, seemed in her debut solo couture show to be edging the house ever so slightly into a new era: One a little more focused on who wears the pants.

Literally. Pants (cut loose and long in tweed bouclé, mousseline and silk satin, paired with neat jackets or cast as a jumpsuit) dominated the collection. Worn largely with patent loafers or white and black bow-bedecked spectator flats, sometimes generously pleated, sometimes palazzo, once even in the form of sheer skinny knickerbockers (ahem, maybe not) they made for easy walking, even into the most formal of events. See, for example, a lovely white tank feathered in chiffon, atop tiered plissé black trousers, or the shell-pink pajamas with a matching tucked and tufted kimono worn by her bride.

It was a subtle but insistent shift, shown in a set that recreated a library in the round, shelves lined with faux vintage volumes of Stendhal, Flaubert and Rousseau, the whole fully in line with the Lagerfeld tradition of elaborate stage craft (Mr. Lagerfeld’s famous scrawl itself was hidden amid the sequined embroidery on a minidress). And it was embedded in a collection otherwise largely familiar (and full of comfortable continuity): long bouclé coats lined by rows of diamanté and pearl buttons; miniskirts and sparkly cocktail dresses paired with cropped puff-shoulder bomber jackets; high-collar white shirts and tuxedo bib velvets; an evening section of simple silver screen-era silks and satin slithers. Still, it was notable.

Because if there were less creative fireworks in Ms. Viard’s work than Mr. Lagerfeld’s, and there were, there was also less fuss. These days, there is more than enough of that elsewhere.

As for Ms. van Herpen, she has carved her own sui generis path, one marked by a conceptual attitude that combines traditional handwork with technology, so that universal subject matter — nature, the body, power — and classic fabrics (duchess satin, organza, cotton, tulle) are treated with entirely forward-looking techniques: laser printing and cutting, heat bonding, and the occasional piece of metal. It makes for a mesmerizing result, and not just because this time she centered her show around a kinetic sculpture titled “Omniverse” by the artist Anthony Howe that gracefully twisted and torqued in its own natural ballet throughout her presentation — but because her clothes do the same thing.

They may be based on mathematical formulas and scientific precision, and explained in impenetrable language that lauds “the hypnotic manifolds within our ecologies.” But in practice they undulate around the body like sound waves given shape, or layers of geologic time; float from shoulders in wings of plissé; and shimmer with vague suggestions of the past — doesn’t that shape look a little Renaissance, that one a bit 19th-century? — and future.

We tend to get distracted, when discussing couture, by the cost of the clothes, and the petites mains and their time-honored skills, and whether we think it is good or bad or frivolous or historic.

But it’s worth taking a moment to consider what an enormous shift these women represent — and from what might have been seen as the most unlikely place. Couture, after all, is traditionally considered the most hidebound part of an industry latterly famous for being built on the practice of men dictating to women how they should look. Not any more. Not now.

Now it’s either an anomaly, or a harbinger.

Vanessa Friedman is The Times’s fashion director and chief fashion critic. She was previously the fashion editor of the Financial Times. @VVFriedman